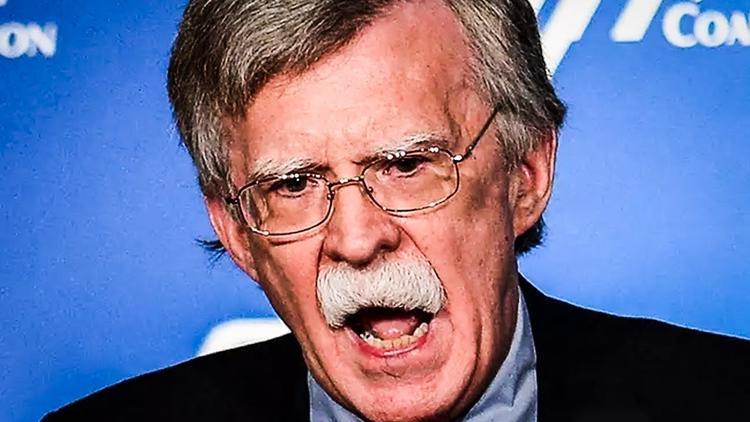 Ann Arbor (Informed Comment) – There are many things wrong with National Security Adviser John Bolton, but the worst is his fixation on petroleum politics. His response to the complex crisis of Venezuela is to hope that US energy corporations can produce some of that country’s oil (“It will make a big difference to the United States economically if we could have American oil companies invest in and produce the oil capabilities in Venezuela.”) He probably deliberately let journalists see a note he had made about sending 5000 US troops to Colombia, which neighbors Venezuela, as a way of threatening Caracas.

The hawks around the isolationist Trump have slow-rolled him on his withdrawal plans and have even inveigled him into increasing US troop levels in some countries, such as Afghanistan and Syria, from which he now seems determined to withdraw.

I am old enough to remember when, after Soviet premier Leonid Brezhnev died in 1982 at age 75, he was succeeded by Yuri Andropov, who died in 1984, and then by Konstantin Chernenko, who died after only 13 months in office. The cheeky pundits in New York and Washington dubbed the USSR a “gerontocracy,” ruled by a series of out-of-touch old men on the verge of dropping dead, still mesmerized by Stalin’s economic theories of the 1930s that had killed millions.

Now the US is a gerontocracy, with one of the older and more out of touch presidents we’ve had in our history, and with a cabinet and administration full of out of touch gerontocrats.

I’m no spring chicken myself and have nothing against the elderly, but they shouldn’t have a stranglehold on US government policy, in part because they often have decades of habits of thought that are now inappropriate.

One of the tragedies of this reign of the old-and-out-of-touch is their fixation on petroleum, from which diesel and gasoline (petrol) are refined.

The only question is how long it will take for it actually to be made illegal, rather as lead is illegal in children’s toys and in paint.

A whole new generation of electric automobiles will arrive in 2020, with many companies such as Volkswagen and Volvo rolling out several lines of them. Popular Mechanics writes, “Volkswagen alone says that by 2022 it’ll have 27 models based on its new MEB electric platform.” More affordable models that can be charged quickly are also on the verge of appearing.

The estimates for how quickly these automobiles will be adopted by the public, often put out by think tanks with relationships to the energy companies, are in my view unduly pessimistic.

Companies like Dacia (part of the Renault, Nissan and Mitsubishi alliance) are promising “shockingly affordable” electric cars within a couple of years. Volkswagen’s “Neo” will also be a game-changer.

Moreover, new models of ride-sharing are evolving in places such as Sacramento that make it possible for the working class to use EVs. Many urban members of the Millennials and Gen Z are uninterested in actually owning an automobile, something our Washington gerontocracy cannot imagine.

If the states and the Federal government made it policy to push electric vehicles, and backed a massive R&D push on things like better batteries, we could make the transition to a mostly electric fleet relatively quickly. Think about EVs as iPhones. In 2000 there were no iPhones. Now the world is flooded with billions of them.

Sending American troops to Colombia or trying to force a weakened Venezuela to let ExxonMobil produce its petroleum, as Bolton wants, is a policy that benefits only a few billionaires and which has an extremely short timeline for success. Even if the US could seize Venezuela’s petroleum, or, as Trump keeps advocating, Iraq’s, it wouldn’t matter very long. Most petroleum is burned as fuel for internal combustion engines in automobiles, trucks and other vehicles.

It just won’t be needed very much longer, and if angry old men like Bolton were replaced by persons younger and on the ball, we’d use tax breaks more effectively to promote electric vehicles instead of saber-rattling at Caracas.

The Ring of Fire: “John Bolton Admits US Wants To Take Venezuela’s Oil”