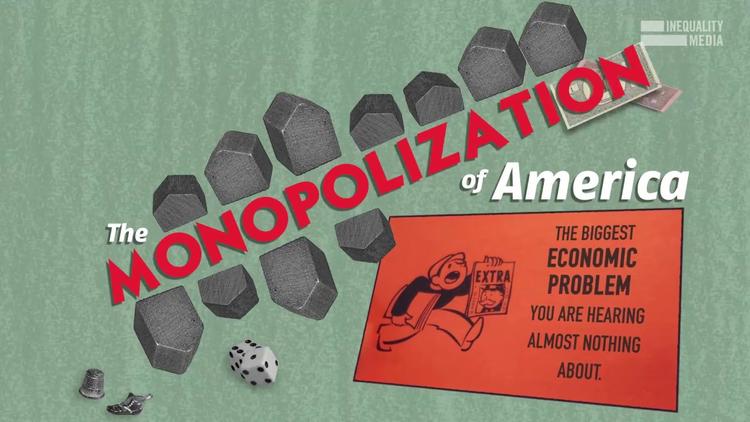 (Inequality.org) – Andrew Leigh, a member of the Australian parliament, has a side gig. He just happens to be a working economist. Other lawmakers may spend their spare hours making cold calls for campaign cash. Leigh spends his doing research — on why our modern economies are leaving their populations ever more unequal.

Leigh’s latest research is making some global waves. Working with a team of Australian, Canadian, and American analysts, he’s been studying how much the prices corporate monopolies charge impact inequality.

The conventional wisdom has a simple answer: not much. Yes, the reasoning goes, prices do go up when a few large corporations start to dominate an economic sector. But those same higher prices translate into higher returns for corporate shareholders.

Thanks to 401(k)s and the like, the argument continues, the ranks of these corporate shareholders include millions of average families. So we end up with a wash. As consumers, families pay more in prices. As shareholders, they pocket higher dividends.

But this nonchalance about the impact of monopolies, Andrew Leigh and his colleagues counter, obscures “the relative distribution of consumption and corporate equity ownership.” Average families do hold some shares of stock, but not many. In the United States, for instance, the most affluent 20 percent of households own 13 times more stock than the bottom 60 percent.

These bottom 60 percent households, as a result, get precious little return from the few shares of stock they do hold, not nearly enough to offset the higher prices they pay on corporate monopoly products.

“On net, that means it’s nearly impossible for the typical U.S. family to make up for higher prices via the performance of their stock portfolio,” notes a Washington Post analysis of the Leigh team research. “When prices rise, low- and middle-class families pay. Wealthy families profit.”

By how much do these affluents profit? Leigh and his colleagues have done the math. The higher prices — and profits — that corporate concentration has generated have shifted 3 percent of national income out of the pockets of poor and middle-class families into the wallets of the affluent.

The larger our corporations become, in other words, the more unequal our societies become.

Now corporations don’t grow larger in the same way as people grow larger. Corporations have no adolescent growth spurts. They don’t mature. They have no real personhood. Corporations only become larger when the executives who run them make them larger, most typically by wheeling and dealing their way through ever grander mergers and acquisitions.

Executives, in short, have a powerful incentive to grow their companies, and that powerful incentive, as the latest research from Andrew Leigh and his colleagues shows, isn’t just making these executives richer. It’s leaving our societies much more unequal.

For minimum decency
we need a maximum wage

So what can we do to ease the damage? Tougher antitrust enforcement could certainly slow our rates of corporate concentration. But the legislative activities of Andrew Leigh in Australia suggest another promising approach as well.

Leigh serves as a “shadow” minister for the Australian parliament’s Labor Party opposition. This past fall, he announced that his party, if elected to power, will require all major corporations to publicly disclose the ratio between their CEO and worker pay.

Forcing Australian corporations to reveal their CEO-worker pay ratios, Leigh notes, would encourage these corporations “to think about how they are serving all their workers, and society as a whole.” But a growing number of progressives in the United States and the UK believe that pay ratios can do more than just “encourage” corporations to better serve their societies.

These progressives are pushing for consequences on CEO-pay ratios, proposing legislation that would deny government contracts and subsidies to corporations with wide gaps between their CEO and worker pay. They’re also calling for higher tax rates on companies with wider CEO-worker pay ratios, and one American city, Oregon’s Portland, already has such an “inequality tax” in effect.

Less wheeling and dealing, in turn, would mean less corporate concentration — and a weaker corporate capacity to raise prices. And that would mean, as the new Leigh gang’s research so clearly shows, less inequality.

Robert Reich: The Monopolization of America

Sam Pizzigati is a veteran labor journalist and Institute for Policy Studies associate fellow. He co-edits Inequality.org, the Institute’s weekly newsletter on our great divides. He also contributes a regular column to OtherWords, the IPS national nonprofit editorial service. Sam, now retired from the labor movement, spent two decades directing the publishing program at America’s largest union, the 2.8-million-member National Education Association, and before that edited the national publications of three other U.S. trade unions. Sam’s own writing has revolved around economic inequality since the early 1990s. His op-eds on income and wealth concentration have appeared in periodicals all around the world, from the New York Times to Le Monde Diplomatique.