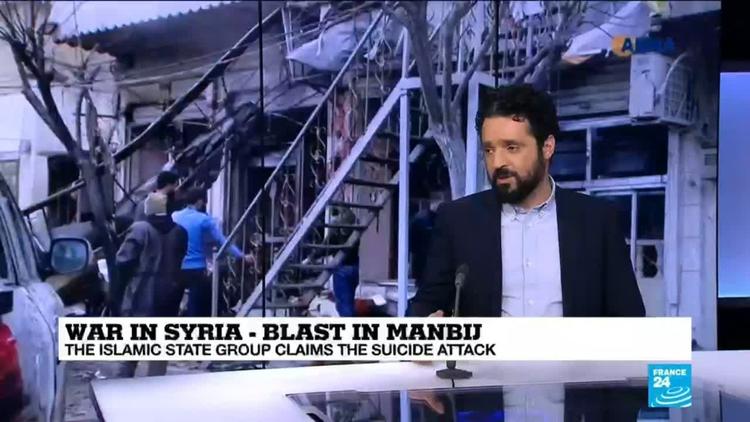 Ann Arbor (Informed Comment) – A powerful blast in the streets of Manbij killed 2 US troops and 2 American civilians and wounded 3 other Americans. Syrian civilians were also killed and others wounded by the suicide bombing at a restaurant on Wednesday. Up until yesterday, 4 US troops had been killed in Syria since the US went in in 2015.

It is a terrible incident, but not unusual in Syria in any other way than that US troops were in the vicinity of the bomb–otherwise bombings have killed tens of thousands of people there in the past eight years.

Here is what popped up at the top of a general google search for the incident:

These are the headlines at two of our newspapers of record, read by governmental and business elites and policymakers. And the headlines are dead wrong.

The bombing does not demonstrate that ISIL has not been defeated. I don’t think regular readers are in any doubt about my view of Trump, but slamming him and Pence for the planned troop withdrawal from Syria on the grounds of this bombing is just ignorant and involves several logical fallacies.

Daesh or ISIL likely detonated the bomb (I say ISIL or Daesh in preference to their own name for themselves, the so-called ‘Islamic State group,’ which is a propaganda term intended to get us to say that phrase, sort of as if a Mexican narco-terrorist group called themselves ‘the Vatican’ and made us say, ‘today the Vatican murdered 10 villagers.’ We should resist their nomenclature; they have little to do with mainstream Islam. For the origins of the latter see my new book, Muhammad: Prophet of Peace amid the Clash of Empires.)

A suicide bombing, however, doesn’t prove that they haven’t been militarily defeated. It proves that some members are still committed to terrorist tactics.

So here is the point: There is no defeat of ISIL so total that it could have stopped a guy from blowing himself up in Manbij. That they were able to do this proves nothing about the vitality of their movement or whether it has been militarily defeated.

The explosion also has no bearing at all on whether the US troops should stay or leave. A small cell could set off a suicide bomb belt from time to time, either way, at any time.

The Turkish military is eager to invade Manbij, which is near Turkey and is west of the Euphrates, and is a place where embedded US troops helped the Kurdish YPG (left wing ‘People’s Protection Units’) defeat ISIL. Turkey considers the YPG to be a terrorist organization and wants to destroy it. Turkey would invade Manbij and overthrow the YPG and install fundamentalist Sunni Arab or Salafi militias there. Remnants of ISIL, who are very much present in these parts of Syria where they used to rule, may hope they can merge back into al-Qaeda-linked groups from which they split in 2013, joining the Turkey-backed victors once the US is out.

And that is another reason this bombing in Manbij is irrelevant to US Syria policy. There is no scenario in which the US and the YPG keep Manbij in the medium to long term, because Turkey will likely take it as it did Afrin, not because ISIL can or will take it back over.

ISIL in 2014 took over Mosul in Iraq and indeed captured about 40% of Iraqi territory, after having ensconced themselves in hardscrabble, desert-like Eastern Syria, in Raqqa and Deir al-Zor. The state they erected in 2014 by my estimates had about 4 million people in it (the press often estimated 9 million, but the press in that era was a little hysterical about ISIL. I called the group a ‘flash in the pan,’ to the derision of some, but I was right.)

President Obama defeated ISIL on both the Iraqi and Syria fronts by supporting Iraqi troops on the one side and the leftist Kurdish militia of the YPG on the other with devastating air firepower. The Air Force is pretty useless against a guerrilla group by itself, but deployed in conjunction with infantry and armor willing to risk casualties, it can be extremely effective. The final battles for Raqqa and Mosul were conducted under SecDef Jim Mattis in 2017 once Trump had come into office. But the strategy for defeating ISIL was that of Obama and his SecDef, Ash Carter, and Mattis simply followed through on their plans.

ISIL as a state has been destroyed. It was only able to erect a state in the first place because a) the Bush administration had destroyed the Iraqi army and had failed to build an effect new army and b) the Syrian army collapsed after the 2011 youth revolt and subsequent civil war, falling from 300,000 men under arms to perhaps 50,000. Neither Baghdad nor Damascus could assert themselves against ISIL/ Daesh effectively in 2014 because, each for its own reason, they lacked a military.

Although a state can be overthrown, the question is then what happens to the 25,000 or so hardcore ISIL fighters.

Some have regrouped as terrorist cells or small insurgent bands in their former stomping grounds, and have regained control over villages or a few neighborhoods. But many demobilized. Some fled to Turkey. Although it is legitimate to worry about how dangerous the demobilized are, the evidence from al-Qaeda is that often belonging to a terrorist or guerrilla group in a place like Afghanistan or Syria is a phase. Young men go off for the glory and become disillusioned, especially if they are defeated in a humiliating way. They go back to their home countries and become bank tellers or taxi drivers. It had been estimated at one point that 40,000 volunteers had cycled through Afghanistan in the 1980s and 1990s, working with al-Qaeda. But then after Bin Laden had to run away to Abbottabad and hide in Pakistan, his group shrank to a shadow of its former self and the 40,000 seem to have just faded away back into quotidian life.

Insurgencies either win, or are crushed, or the conflict is negotiated to an end. One study found that the negotiated conclusion occurs about a third of the time, as with the IRA in Northern Ireland. Most of the time the insurgencies are defeated, as with the Tamil Tigers in Sri Lanka or all the Cuba-inspired leftist insurgencies in Latin America (all of them were crushed). Insurgencies do occasionally overthrow the government and win, but that is rarer.

Once the insurgency is defeated, as ISIL was, there can be remnants that devolve into small terrorist cells and take revenge for their defeat by committing terrorism. In essence, the First Wave of the Ku Klux Klan was former Confederate soldiers who had been defeated but now formed a secret society to push back emancipated African-Americans and Jews and Catholics considered ‘carpetbaggers’ in the South. You still have some terrorism by the so-called ‘Real IRA,’ which rejects the Mitchell settlement, but they are a tiny and largely irrelevant group.

The literature I’ve reviewed suggests that the best way totally to defeat an insurgency is to change the social and economic situation that caused part of the public to support it. Trump’s mean-spirited denial of reconstruction aid to Raqqa is a much better predictor of an ISIL resurgence than a few roadside bombs.

And that should be the question. How to reconstruct Eastern Syria so as to forestall a return of radicalism that might become a base for terrorism against, e.g. Europe? A couple thousand US troops are not what will solve the problems one way or another, at this phase of the struggle.

Trump may or may not be doing the right thing to pull out the troops. He is definitely doing the wrong thing by declining to put resources into reconstruction.

France 24 English: “Syria : Islamic State group hits in Manbij for the second time in less than a month”