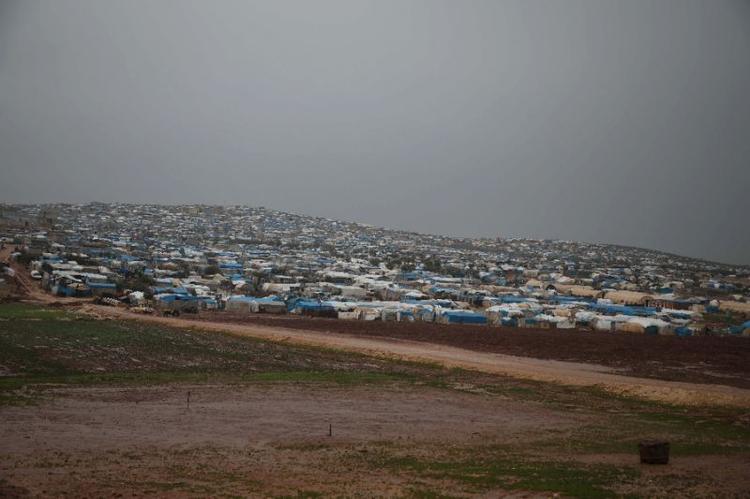 Beirut (AFP) – A general view of a camp for displaced people in the village of Atme, in Syria’s mostly rebel-held northern Idlib province on January 8, 2019
The Idlib area in northern Syria is now fully ruled by Hayat Tahrir al-Sham (HTS), a jihadist organisation dominated by members of Al-Qaeda’s former affiliate.

Some of the other factions in the region are already allies, the others will either have to leave to other areas or be absorbed into the so-called Salvation Government run by the HTS.

How was this de-facto “emirate” allowed to consolidate and what consequences could it have for the nearly eight-year-old Syrian conflict and its main protagonists?

A deal was struck between rebel-backer Turkey and Damascus ally Russia in September to stave off a threatened government offensive on Idlib.

It has successfully prevented a massive Russian-backed regime assault on an area that is home to around three million people but its terms have remained unfulfilled.

Moscow had tasked Turkey, whose proxies fell under an umbrella known as the National Liberation Front, with disarming hardline factions in Idlib.

It failed to do so and it was HTS that went on the offensive instead.

They made rapid gains and intense clashes that left more than 130 dead this year, which led to a deal Thursday that saw the two Turkish-backed remaining factions stand down, capping the jihadists’ clean sweep.

Turkey, which has troops deployed in parts of Idlib and elsewhere in northern Syria, appeared to do little to stop HTS’ expansion.

“Turkey didn’t prevent HTS’ takeover, but it’s not obvious that it was in a position to do so,” said Sam Heller, an analyst with the International Crisis Group.

HTS has an estimated 25,000 seasoned and well-armed fighters in its bastion, and has long been the dominant force in Idlib.

The jihadists’ lightning advance across Idlib earlier this year mark an unequivocal defeat for several outfits that were directly supported by Turkey.

“For Turkey, it’s the defeat of its allies,” said Fabrice Balanche, a Syria expert and geographer.

Two factions in the Turkey-backed National Liberation Front that had been battling HTS stood down and signed the deal on Thursday which essentially sees them absorbed.

Ahrar al-Sham and Suqur al-Sham said they were keeping some of their forces in the Idlib area for now, but they will fall under the newly expanded administration of the Salvation Government.

Just like the forces from the Nureddine al-Zinki group that HTS defeated last week, the rebels who reject jihadist rule will most likely relocate to other Turkish-controlled areas such as Afrin.

Turkey has been training and equipping Syrian proxies to use against the Kurdish militia that controls the northeast of the country.

They have threatened a cross-border assault against the Kurdish People’s Protection Units (YPG), but the main deterrent has been the presence of a US-led coalition.

The troop pullout announced by US President Donald Trump last month, and which the coalition confirmed Friday was under way, could clear the way for a Turkish offensive.

HTS’ takeover of Idlib means the terms of a deal reached in the Russian resort of Sochi on September 17 have not been respected.

After the agreement with Damascus sponsor Russia, Turkey was tasked with using its proxies in Idlib to rein in jihadists.

The Sochi deal froze a threatened Russian-backed government offensive which had seemed imminent four months ago.

An onslaught on an area home to an estimated three million people would have caused an unprecedented humanitarian catastrophe.

Turkey, which already provides shelter to 3.6 million Syria refugees, is keen to avoid a fresh round of violence that could spark another wave of displacement.

The HTS takeover revives the threat of a Syrian offensive but Balanche predicted it might not be the regime’s priority.

“The Russians are ready to attack at any moment but they won’t do it,” he said.

“They are using (Turkish President Recep Tayyip) Erdogan to put pressure on the Americans to leave northeastern Syria,” he said.

Turkey on Thursday reacted angrily to the mixed messages the US administration has been sending about the pace of the troop withdrawal, and warned that any further delay would prompt it to trigger its invasion.

Featured Photo: A general view of a camp for displaced people in the village of Atme, in Syria’s mostly rebel-held northern Idlib province on January 8, 2019 (AFP Photo/Aaref WATAD).