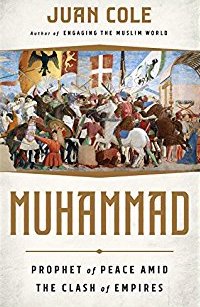 Congratulations to my publisher @BoldTypeBooks on their new name!

I’m proud to be a Bold Author and part of the #BoldTypeBooks community. www.BoldTypeBooks.org.

And just a reminder:

The New York Times Book Review has a glowing review of my new book, Muhammad: Prophet of Peace amid the Clash of Empires, calling it ‘erudite,’ ‘informative’ and ‘ambitiously revisionist.’

“Cole’s book, “Muhammad: Prophet of Peace Amid the Clash of Empires,” is not just eruditely informative, but also ambitiously revisionist, with two unorthodox arguments he keenly advances throughout the book.

The first argument links the birth of Islam in early-seventh-century Arabia to the major geopolitical conflict of the time — the clash between the Christian Byzantine Empire based in Constantinople and the Zoroastrian Sasanian Empire based in today’s Iran.”

Cole’s second argument is more important. Going against familiar if not frequent militant images of the Prophet Muhammad in the West, he portrays Islam’s founder as a peacemaker who wanted only to preach his monotheism freely and who even tried to establish “multicultural” harmony.

Akyol concludes, “Beneath this thick layer of what became Islamic tradition, there is a more uplifting image of the Prophet Muhammad, waiting to be discovered not just by non-Muslims, but also many Muslims themselves.”

Mr. Akyol, a prominent journalist who has appeared in the New York Times, Washington Post, Wall Street Journal, etc., has a fascinating book The Islamic Jesus.