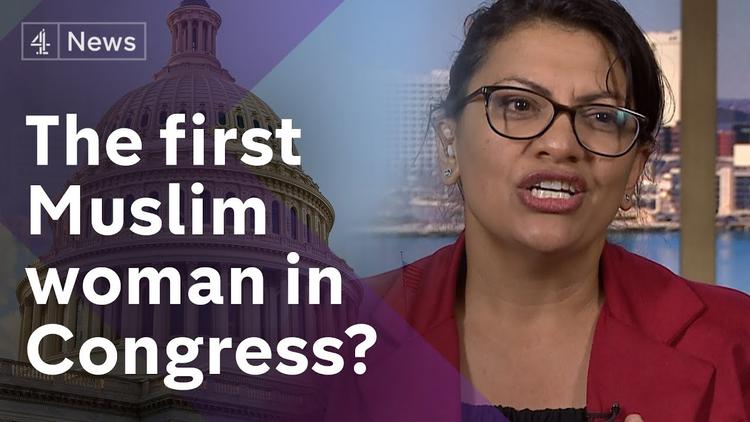 One of the founding myths of Israel is the non-existence of the Palestinian people. Tragically this myth served the country to great effect especially in denying the return of refugees (750,000, half the population) to their country following their expulsion in 1948 and in continually hindering the Palestinian people’s progress into a sovereign, independent state. Nothing threatens this myth more than a Palestinian refugee reasserting their identity and offering themselves as a constant reminder of Israel’s past sins. Their mere existence is a menace.

In Washington, where this myth has been exploited to its fullest in the corridors of power, Israel has now come face to face with this historical menace in the shape of a Palestinian refugee, Rashida Tlaib. Given the state of American politics, where Israel enjoys unprecedented support under the Trump administration, it’s hard to think of three things more challenging in serving as a Representative in Capitol Hill than as a Palestinian, Muslim woman. Last week Tlaib became the first with these distinctions to be sworn in to Congress. How much of a test her Muslim Palestinian heritage was going to be quickly became apparent. The treatment she has received over the past week explained in part why she is the first in 230 years to occupy one of the 535 seats in Congress.

In the first of many onslaughts she faced, Michigan Democrat, Tlaib, was singled out for remarks she had made about President Trump during a private party. Addressing the audience she described a conversation she’d had after being elected as the representative for Michigan’s 13th congressional district. Tlaib spoke of impeaching Trump telling the crowd: “And when your son looks at you and says, ‘Mama, look, you won. Bullies don’t win.’ And I said, ‘Baby, they don’t, because we’re going to go in there, we’re going to impeach the motherfucker!’”

The remark by Tlaib, descendent of a Palestinian refugee family, caused outrage. Her colleague and newly elected Congresswoman Alexandria Ocasio-Cortez had to come to her defence describing the condemnation of Tlaib as the “Republican hypocrisy at its finest”. Ocasio-Cortez, who too has been subjected to a campaign maligning her reputation, called out the double standard by pointing to Trump’s many sexist comments. Both women are strong critics of Israel, which perhaps explains the vicious campaign to discredit them before their political career gets off the ground.

In a New York Times opinion piece, Michelle Goldberg also came to Tliab’s defence saying that the Democrat representative had said “nothing wrong” before cataloguing the many instances where Republican members of Congress had used language infinitely worse than anything said by the new member of Congress.

It was the second article in a month in which Goldberg came to speak in favour of Tlaib. In the first article, also in the New York Times, Goldberg defended Tlaib’s decision to support the Boycott, Divestment and Sanctions Campaign (BDS). Tlaib’s endorsement of BDS – she was only one of two US politicians to back the global campaign- made her easy prey. Goldberg it seems was one of the few to realise that this new batch of progressive politicians would be subjected to vitriolic campaigns by the pro-Israeli lobby for taking such a strong stance against Israel, prompting her to explain why Tliab was not anti-Semitic for giving her backing to the BDS movement.

In the article, Goldberg explains why anti-Zionism isn’t the same as anti-Semitism. “The conflation of anti-Zionism with anti-Semitism is a bit of rhetorical sleight-of-hand that depends on treating Israel as the embodiment of the Jewish people everywhere,” said Goldberg. She insists that treating the state of Israel as a stand in for Jews was “increasingly absurd” given that “the current Israeli government has aligned itself with far-right European movements that have anti-Semitic roots”.

Goldberg’s piece, which also highlighted the “long history of Jewish anti-Zionism or non-Zionism” was seen as another example of the disillusionment and alienation felt by American Jews over Israel; a conclusion that was further reinforced by an article published a few week later in the New York Times predicting a “messy breakup” of American Jews and Israeli Jews.

Tlaib, however, would go on to endure another barrage of attacks. This time it was for comments she made about a bill targeting BDS. Known as the Israel Anti-Boycott Act, its supporters appeared to want to exploit the chaos and mayhem of the US government shutdown to push through a law in its first legislative act aiming to prevent opposition to the Israeli government. It was widely denounced as an anti-free speech, anti-First Amendment bill. Senator Bernie Sanders slammed the proposed legislation saying: “It’s absurd that the first bill during the shutdown is legislation which punishes Americans who exercise their constitutional right to engage in political activity. Democrats must block consideration of any bills that don’t reopen the government. Let’s get our priorities right.”

While sharing the comment by Sanders on Twitter, Tlaib said: “They forgot what country they represent. This is the U.S. where boycotting is a right & part of our historical fight for freedom & equality. Maybe a refresher on our U.S. Constitution is in order, then get back to opening up our government instead of taking our rights away.”

Her remarks sparked controversy with a number of pro-Israeli groups launching an attack on Tlaib citing it as an example of the “old anti-Semitic ‘dual loyalty’ garbage”. Republican Senator Marco Rubio, who introduced the bill, also denounced Tlaib’s tweet saying: “This “dual loyalty” canard is a typical anti-Semitic line. #BDS isn’t about freedom & equality, it’s about destroying #Israel…”

Tlaib hit back saying that her comment was critical of US Senators who were seeking to strip Americans of their Constitutional right to free speech. Speaking to Democracy Now, she defended her remark citing America’s rich history of using boycott to end injustice and discrimination: “I cannot imagine our country not having the right to economic boycott. Think about, you know, Alabama, Montgomery. Think about Montgomery, Alabama, and all around the country, the civil rights movement,” Tlaib said. “Even alone now from those that are, you know, Occupy Walmart, the attack on the corporations, all of those folks are, you know, using the right to speak, the right to economic boycott, the right to be able to push up against things that they disagree with. There is nothing wrong with that.”

It’s revealing that of the countless American lawmakers to criticise the bill, it was Tlaib that was singled out as an anti-Semite. “Let’s get our priorities right,” the advice offered by Sanders at the end of his remark could just as easily be interpreted as being anti-Semitic for it suggests that the supporters of the bill were putting the interest of Israel ahead of the interest of the US. Sanders, unlike Tliab, was not targeted with an avalanche of abuse on the media, confirming Tlaib’s fear that her “mere existence” was going to be a problem for many in Washington.

The astute observation was made following Tlaib’s decision to be sworn in to Congress using the Quran. Members of the American right and pro-Israeli groups saw this as another reason to fan hatred against Tlaib. With paranoia gripping large sections of America, who believe in a conspiracy about a Muslim takeover of the country, prominent American advocates of Israel decided to exploit the febrile political atmosphere to portray Tlaib as a terrorist. Her inauguration with the Quran was portrayed as a “Palestinian Intifada”; a “Jihad Arm Struggle” that had arrived in the US Congress.

Tlaib most likely had these hyper-aggressive pro-Israeli activists and the growing far-right in mind when telling the press: “My mere existence, that I’m even of Muslim faith, is going to be a problem for them with or without me swearing in on any Quran.” Her comments seemed intended to dispel the false notion that Islam is alien to the country. “Muslims were there at the beginning,” she continued, adding: “Some of our Founding Fathers knew more about Islam than some members of Congress now.” While providing Americans a much needed history lesson and a tutorial on the US Constitution, Tlaib drew attention to the fact that there are many that will criticise her at every turn and will use any opportunity to denounce her simply because of who she is: an American-Palestinian Muslim woman.

READ: The international community upholds deprivation by supporting Israel and the PA

Tlaib belongs to a new and diverse group of members of the Congress that have been sent to DC by American voters to challenge what many see as rot in American politics. Private interests have always behaved like saboteurs in US politics but rarely has there been a concerted effort to undermine the constitution and the values America claims to stand for. “A refresher” of the US Constitution is not only in order, as Tlaib concluded, American politicians have heard the message and thrown out the anti-BDS bill denouncing it as unconstitutional.

It has been pointed out that were it not for the fact that Trump was a white man, he would not have been able to become the president. Tlaib, despite her rocky start, realises that as an American, Palestinian, Muslim woman, she will be judged to a much higher standard than anyone in Congress. No women, let alone a Palestinian Muslim woman, will be granted the license to behave the way Trump has been behaving. Tlaib admits that her comments about Trump have been a “distraction”. She has quickly realised that the bigger fight is not Trump but the threatening chasm in the country’s politics between those that wish to protect the values enshrined in the country’s constitution and those that seek to undermine it.