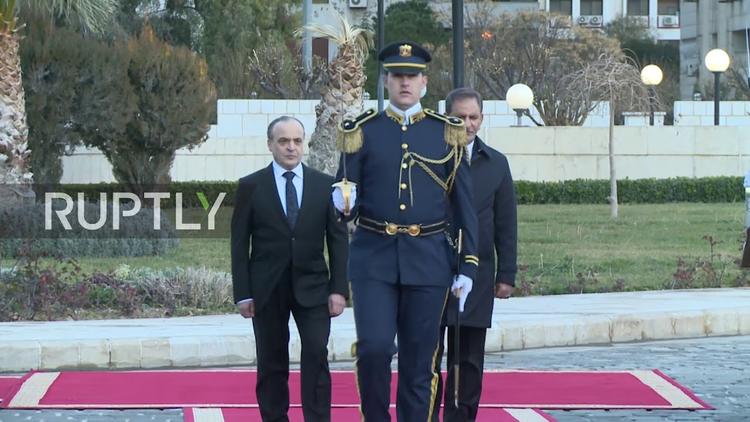 Damascus (AFP) – Syria and Iran signed 11 agreements and memoranda of understanding late Monday, including a “long-term strategic economic cooperation” deal aimed at strengthening cooperation between Damascus and one of its key allies in the civil war that has torn the country apart.

They were signed during a visit to Damascus by Iran’s First Vice President Eshaq Jahangiri.

Syrian Prime Minister Imad Khamis said it was “a message to the world on the reality of Syrian-Iranian cooperation”, citing “legal and administrative facilities” to benefit Iranian companies wishing to invest in Syria and contribute “effectively to reconstruction”.

The agreements included two memos of understanding between the railway authorities of the two countries as well as between their respective investment promotion authorities.

In relation to infrastructure, there was also rehabilitation of the ports of Tartus and Latakia as well as construction of a 540 megawatt energy plant, according to Khamis.

In addition there were “dozens of projects in the oil sector and agriculture”, he added.

The civil war has taken an enormous toll on the Syrian economy and infrastructure, with the cost of war-related destruction estimated by the UN at about $400 billion.

Iran will stand “alongside Syria during the next phase that will be marked by reconstruction”, Jahangiri promised.

Iran and Syria had already signed a military cooperation agreement in August while Tehran has supported Damascus economically during the conflict through oil deliveries and several lines of credit.

The new agreements come against the backdrop of fresh US sanctions against Iran, while Syrian President Bashar al-Assad’s regime and several Syrian businesspeople and companies are already on US and European blacklists.

They also come as Israel has repeatedly pledged to keep arch-foe Iran from entrenching itself militarily in Syria, where the war has already claimed more than 360,000 lives and displaced several million people.