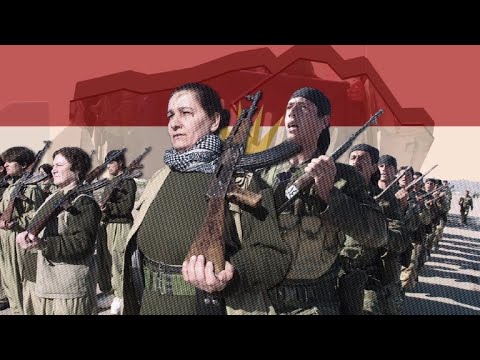 Donald Trump’s unilateral decision to withdraw U.S. forces from Syria is likely to help ISIS adopt a new strategy and expand its territorial control while at the same time continuing its execution of unarmed civilians. The move also means Trump has stabbed in the back his most successful military partner, the Kurds.

Nonetheless, all is not lost for the Kurds — they have already emerged as prominent actors who are capable of developing serious diplomatic and political ties.

A decade ago, the AKP government in Turkey launched a set of reforms called the Kurdish Opening and started official conversations with the leaders of the Kurdistan Workers Party, known as the PKK. This was not the first time that the Turkish state was in contact with the PKK, but it was the first period for launching a multi-layered process which made the negotiations legitimate.

Yet Turkey’s 40-year internal conflict did not end and, in the summer of 2015, the dialogue between both sides gave way to aggravated state repression.

Less than two years after the collapse of the Turkish-Kurdish negotiations, the Office of the United Nations High Commissioner on Human Rights announced that half a million Kurdish people left their homes due to the ongoing military operations by the Turkish army from July 2015 to December 2016.

Turkish troops entered the peripheral, politicized neighbourhoods of Kurdish cities after the PKK declared democratic autonomy, and kept those districts under curfew, sometimes for up to 90 days.

These developments beg the question: Why did the dialogue between the Turkish state and the PKK, aimed at mitigating ethnic conflict and bringing about peace, fail in Turkey?

Even though the Turkish-Kurdish negotiations were highly publicized, the Turkish state’s reliance on violence has been underestimated.

Nation-states are expected to maintain control over certain territories that are under their jurisdiction. But what happens when a specific state enforces territorial control and violence over minority-populated areas in its attempts at democratization and dialogue during a negotiated peace process?

And how does the existing territorial agenda of the Turkish state affect its desire to resolve the protracted conflict with Kurds?

There is substantial research offering rich insights into territory, state and authority in parts of the world ranging from Israel and Palestine to Ireland, the Balkans, Asia and Africa.

But the relevance of the territorial aspects of conflicts has been largely neglected when it’s come to examining the Kurdish-populated borderlands of Turkey.

The research I conducted in Turkey’s Kurdish borderlands between 2013 and 2014 shows the territorial agenda of the Turkish state can be best seen when conducting ethnographic field work in those regions.

Kurdish borderlands are war-torn areas with their own dynamics. Opposing sides are more likely to confront and interact with each other here.

In these volatile conditions, people became more willing to share their stories once I got to know them better. My interviews revealed that the policies introduced by the Turkish state to bring about peace failed because the state pursued what I call a “dual strategy” during the same process of democratic reforms.

That is, the state’s territorial agenda coexisted with its emphasis on negotiating the Kurdish-Turkish conflict through democratic channels.

Drawing on the 12 months of field work, my study’s focus on territorial control involved two aggregate factors, each of which also have various components.

At the state level, I examined democratic reforms and showed the mechanisms of territorial control.

At the Kurdish level, I looked at the responses of Kurdish political actors and Kurdish people to understand how the Kurds regarded the reform process. I presented the stories of Kurds from the 1990s and 2000s to show their experiences living under territorial control on the borderlands.

Both of these aggregate factors are the two main components of the typology of territorial control.

At the macro level, the state enacts policies and Kurdish political actors respond.

At the micro level, the state employs various mechanisms, including securitization, expulsion, demographic and administrative control, nationalizing the landscape and control of movement across borders.

By focusing on territorial control, my research explains the limitations of democratic reforms that only focus on cultural rights but exclude territorial rights.

The processes of ethnic control continued to operate in certain Kurdish-populated sites, such as Hakkari, Sirnak, Van, more than others during the Turkish-Kurdish peace process. These control tactics negated the impact of the so-called Kurdish Opening.

Why did the Turkish state continue to maintain territorial control in certain areas more than others? Because these are border zones in rough terrains that are more likely to foster insurgency.

Border zones do not only cover the lines between Turkey, Iraq and Iran, which were not even properly fenced, but also some villages and towns in the hinterland/interior territories, which I also call ‘the zone of conflict’.

Control mechanisms used by the Turkish state seemed to be on hold in certain destinations, while they were strikingly visible in some other locations during my 12 months in the region. In these interior territories, displacement and loss of property became the primary tool of control while militarization and demographic control was more pervasive in towns right on the borders.

The Turkish state does not manage every border in the same way. Despite the common narratives of loss and displacement, there were some strategic locations where the state preferred to have civilians around rather than keeping the area vacated.

One of the villagers who also served as a village guard for more than a decade told me how they were compelled to stay in the village and became shields between the soldiers and guerrillas.

The majority of people, regardless of their political ideology, agree that everyone from these areas lost a property at least once. On top of that, most of them also complained about the lack of sufficient and fair compensation.

Another common narrative, independent of political ideology, was that those who received some amount of compensation complained about the corrupt system because, according to these participants, the legal system created certain beneficiary groups who have been taking advantage of the Kurdish villagers’ fragile conditions.

Those who were openly associated with the People’s Democracy Party (HDP), a pro-minority party that has MPs in the Turkish parliament, were more critical about the processes of control and violence as well as their durability, partly because the HDP voters have witnessed and experienced the deep, dark side of these control practices — but also because every aspect of their lives was politicized.

In accordance with their political stance, the majority of the participants from the Kurdish-populated borderlands were sceptical but also optimistic about the peace process, because, for them, the process could be manipulated but the idea must have been appreciated because it was proposed by the PKK leader, Abdullah Ocalan.

Surprisingly, most of these people also had to serve as village guards, paramilitary groups armed and paid by the state in their war against the PKK.

The stories of village guards show the complexities and contradictions of this protracted conflict.

The village guard system has become a primary component of the co-optation and dependency measures taken by the state to neutralize independent actors and maintain territorial control in these highly militarized areas adjacent to Iraq and Iran.

Democratization is a long path requiring courage, fairness and commitment. At the heart of democratization lies the elusive Turkish-Kurdish negotiations.