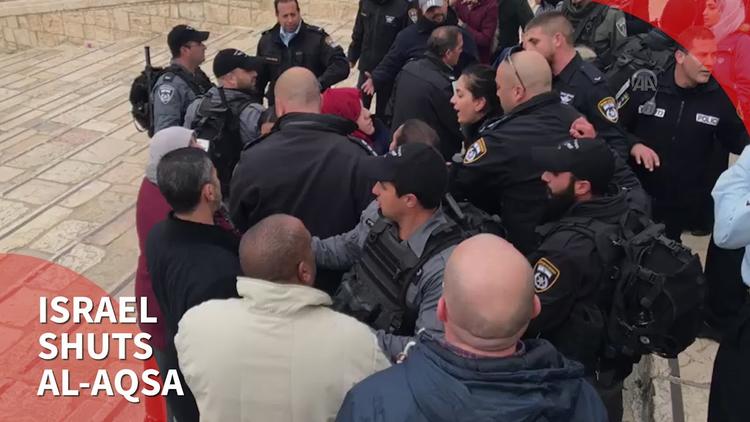 RAMALLAH (Ma’an) — Palestinian Liberation Organization (PLO) Executive Committee Member, Hanan Ashrawi, said on Wednesday, commenting on Israeli escalation at the Al-Aqsa Mosque compound in occupied East Jerusalem over the past two days, “Israel is pursuing an irresponsible and dangerous policy in occupied East Jerusalem that aims to alter the historic status quo in the City and stoke sentiments of religious fervor.

“Over the past two days, Israeli forces have escalated provocative actions at the Holy Al-Aqsa mosque compound in occupied East Jerusalem, including closing al-Rahma Gate, assaulting worshipers and denying them access to the holy site as well as detaining religious leaders and residents.

Ashrawi added that “By consistently and continually facilitating provocative raids of Israeli settlers inside the Holy Compound as well as intervening in the work and management of the holy site, Israel is willfully provoking anger and destabilizing a volatile situation.””The seal off of Al-Aqsa Mosque Compound, closing al-Rahma Gate with iron chains, transforming the compound into a closed military zone, and attacking worshipers are inexcusable,” the statement said, “These actions come in the context of wider Israeli war crimes under the Rome Statute, including illegal Israeli settlement construction and expansion in and around Jerusalem as well as the expulsion of a Palestinian family from its home in the Old City. These reprehensible and illegal actions must be counteracted by unanimous and unequivocal international condemnation.”

Ashrawi stressed “We must not lose site of the fact that this unbridled escalation is facilitated by the unlawful and immoral policies of the Trump administration towards Jerusalem and Palestinian rights, especially its dangerous assimilation of religious extremism with politics to justify these policies. Combined with blind and ideological US support, the Israeli government’s actions against the Holy Al-Aqsa Compound and the Palestinian residents of Jerusalem are escalating the situation and threatening to drag the region into a religious war.”

Ashrawi called upon all responsible international actors to act without delay to protect Jerusalem from these provocative assaults. We must work together to defend Jerusalem from the violent zeal of Israeli actions. The City’s legacy and religious historic status quo is under Israeli assault and we ask all states to take part in its defense.