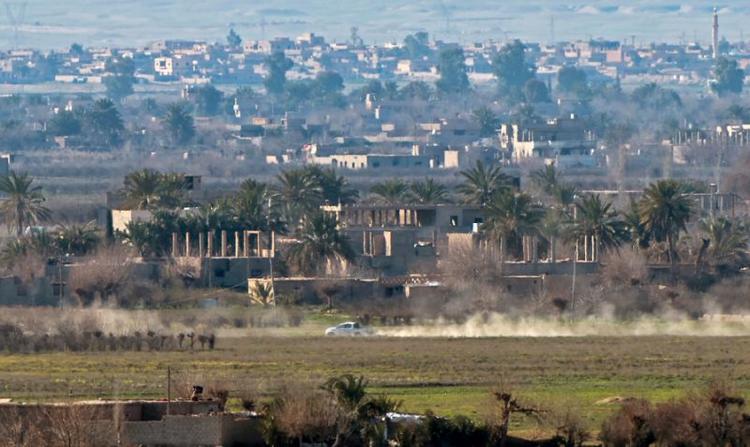 Sochi (AFP) – Russian President Vladimir Putin was set to host his Iranian and Turkish counterparts Thursday to discuss how to resolve the conflict in Syria as Islamic State jihadists made a last stand in the east of the country and Washington prepares to withdraw troops.

A flurry of diplomatic efforts this week are focusing on the eight-year conflict in which more than 350,000 people have died.

The international anti-IS coalition is set to meet on the sidelines of the Munich Security Conference while US Secretary of State Mike Pompeo will attend a conference on the Middle East in Warsaw.

At their meeting in the Black Sea resort of Sochi, Putin and Iran’s Hassan Rouhani — who back Syrian President Bashar al-Assad — and Turkey’s rebel-backing Recep Tayyip Erdogan are set to discuss ways to advance intra-Syrian dialogue.

Russia has been a key player in the conflict since launching military intervention in 2015 in support of Assad’s regime, which now controls almost two-thirds of the country.

The Astana peace process, launched on the initiative of Moscow along with Iran and Turkey, has eclipsed parallel talks led by the United Nations without coming up with a definitive solution to the conflict.

In late December, the United Nations admitted it had failed to put such a committee in place, citing problems with changes wanted by Damascus to the list of proposed members.

Lavrov said Wednesday: “We are ready to search for a solution to this situation… We will continue this work.”

The meeting will be the fourth summit between the countries’ leaders since November 2017.

It comes as Kurdish and Arab fighters in the Syrian Democratic Forces (SDF) with support from the Washington-led coalition on Saturday launched a “final” offensive against the jihadists’ last holdout in the eastern Deir Ezzor province.

Following their emergence in 2014 and proclamation of a “caliphate” in parts of Syria and Iraq, the IS jihadists controlled major cities, but they are now squeezed into a few square kilometres.

Around 2,000 US troops are due to be pulled out of the region following a surprise announcement by President Donald Trump in December. But Washington has still not given a precise timeline for this.

The most recent summit between the three leaders was in September in Iran, when they made public their differing views on the future of Syria’s northeastern province of Idlib.

At a separate meeting later that month, Putin and Erdogan managed to block an offensive planned by Syria on Idlib. Instead they agreed to create and jointly monitor a buffer zone around the vast region where rebel groups still remain and Assad’s forces have not managed to take control.

Erdogan and Putin are set to discuss the future of the province at a separate meeting ahead of their summit with Rouhani.

A Russian-Turkish agreement calls for all radical fighters — including those belonging to Hayat Tahrir al-Sham, an alliance led by Syria’s former Al-Qaeda affiliate — to leave the area. But its fighters have since strengthened their hold on the region.

Lavrov said Wednesday in Sochi that Hayat Tahrir al-Sham had “seized 90 percent of the territory” and stressed that no agreements permit “the eternal preservation of this nest of terrorists on Syrian soil”.

“We will do all we can to help the Syrian government and its armed forces to solve the problem of liberating their territory,” Lavrov added.