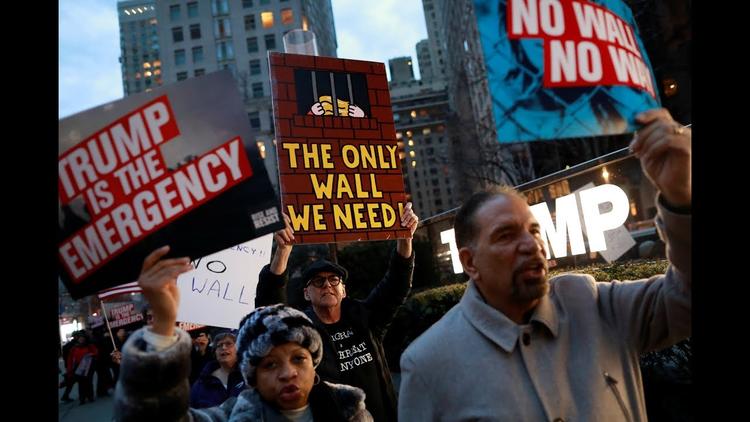 Ann Arbor (Informed Comment) – From Trump’s very inauguration day speech, written for him by the fascist gadfly Steve Bannon and man still without a prom date Stephen Miller, it was apparent that the 45th president was a constitutional crisis waiting to happen.

And now, without our realizing it for the most part, the constitutional crisis is here.

The Constitution gives Congress the right to spend money and to designate how it may be spent. Republicans used that authority to stop the Obama administration from closing the Guantanamo Bay concentration camp, denying the president the funds necessary to shut it down.

Having the power of the purse lie with the legislature goes back to British parliamentary practice of the late medieval and early modern period. Making the king go to parliament for permission to institute a new tax for some new royal enterprise is a feature of the Magna Carta, the ‘Great Charter’ imposed on the king by the barons in 1215.

Trump’s ‘Declaration of Emergency’ over his trumped up border wall crisis is an attempt to sidestep constitutional principle and to have the president instead of Congress decide how appropriated monies will be used. In principle, Trump is doing what Reagan and his Iran-Contra criminal circle did in the 1980s, when the Congress’s Boland Amendment forbade the president to use US taxpayer money to support the right wing death squads or ‘contras’ in Nicaragua. Oliver North, Elliot Abrams and others just went around the Boland Amendment, illegally selling weapons to Iran and using the cash to support the contras. Those actions were unconstitutional, as Trump’s is today.

Trump will either get his way on the declaration of emergency or not, but either way he has provoked a constitutional crisis.

As a historian of the Middle East, let me just point out that declaring a state of emergency in that region is a means of creating a president for life. Hosni Mubarak of Egypt declared a state of emergency in 1981 when he came to power on the assassination by Muslim extremists of Anwar el Sadat, the former president. Mubarak’s state of emergency was not lifted until the 2011 youth revolution that unseated him. Often Middle Eastern regimes put nice rights into their constitution, as in Algeria, but then the military-backed declares a national emergency and sets aside the constitution, as happened in Algeria.

For an authoritarian president to declare a state of emergency in the Middle East signals a desire to stay in power for the rest of his life.

Trump is of course creating numerous constitutional crises. He call for ‘retribution’ on Saturday Night Live in response to a skit by Alec Baldwin making fun of his wall obsession. In genuine democracies the president does not threaten satirists with ‘retribution.’ That is something Field Marshal al-Sisi would do (and has done) in Egypt. Satirist Bassem Youssef had to abandon his television show lest he face retribution from al-Sisi.