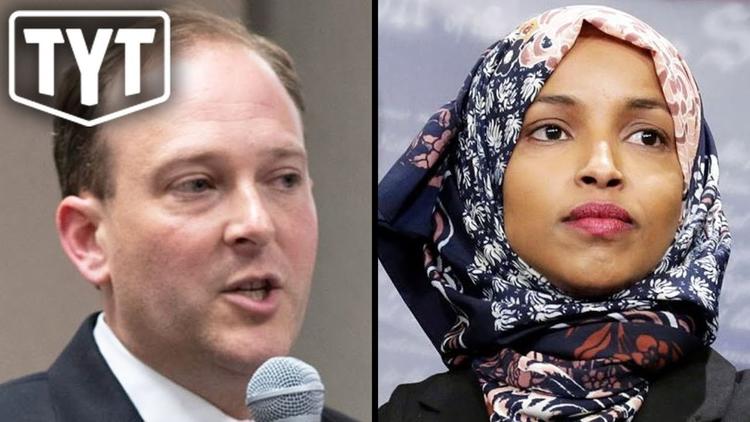 A Republican congressman was angered when Rep. Ilhan Omar (D-MN), a Muslim and a Somali-American, was chosen to be on a committee with oversight on U.S.foreign policy, and he became hysterical again when she criticized him for his prejudiced statements. “Rep. Lee Zeldin (R-NY) took a shot at the Minnesota Democrat, based on her religious background, when announcing his own selection as the ranking member of the Oversight and Investigations Subcommittee of the House Committee on Foreign Affairs.”

The Islamophobic dog whistles continue from the Republican Party… pic.twitter.com/l4HGx9fkSP

Don’t mind him, he is just waking up to the reality of having Muslim women as colleagues who know how to stand up to bullies!

It’s gonna be fun watching him lose his marbles ? https://t.co/FPEtcxW4GN

Crazy to watch ‘what’ Dems are empowering? Ilhan Omar is a human being you creep. The pronoun is ‘who’. https://t.co/40WSzvWzJl

This new VM just came into my office. @IlhanMN, this is just another day in my world as an American Jew in Congress. Would love to know what part of this hate filled, anti-Semitic rant you disagree with? I disagree with all of it. Do you? pic.twitter.com/4WoJqiATCf

This is heinous and hateful. I too am flooded with bigoted voicemails and calls every day.

Maybe we could meet and share notes on how to fight religious discrimination of all kinds?

Maybe over Somali tea, in your old office which I happen to be in now. https://t.co/FQ909kYSwo

The Congressman who introduced a motion to censure @IlhanMN and @RashidaTlaib because they're Muslim women who criticized Israel is now trying to blame Rep. Omar for an antisemitic voicemail he received.

What an absolutely reprehensible way to treat a colleague. Disgusting. https://t.co/4ZzyfJVXox

The Young Turks are the Largest Online News Show in the World. Hosted by Cenk Uygur & Ana Kasparian. LIVE weekdays 6-8pm ET. The Young Turks were the first original talk show on Sirius satellite radio and the first live, daily webcast on the internet. But that is not the revolution. We are a rare show that combines all of the news that people care about in one place. We are not afraid to talk about politics and entertainment and sports and pop culture. But that is not the revolution either. Subscribe to The Young Turks on YouTube: https://www.youtube.com/subscription_center?add_user=theyoungturks