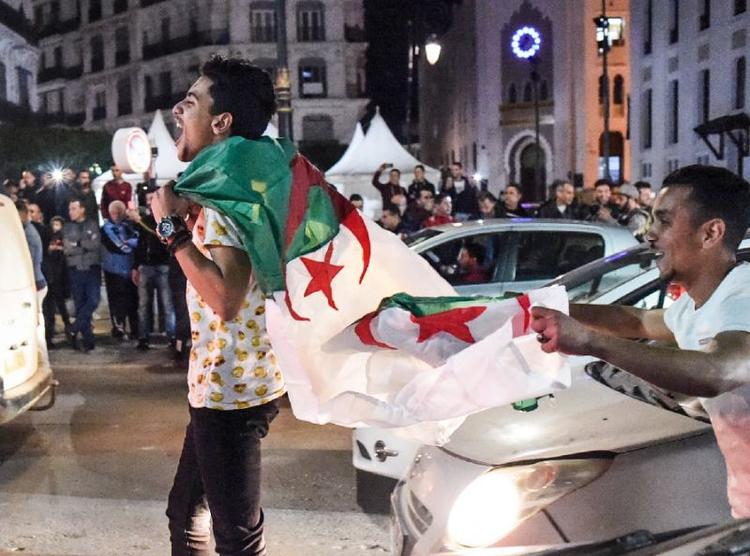 Algiers (AFP) – Algeria’s ailing President Abdelaziz Bouteflika announced Monday he is dropping his bid for a fifth term in office, scrapping the upcoming elections altogether after weeks of protests against his candidacy.

“Peacefully, we have overthrown the puppet!” people sang in Algiers following the president’s decision.

Celebratory honking of car horns rang out in the city centre, as Algerians waved their national flags on streets deserted by police.

“There will not be a fifth term” and “there will be no presidential election on April 18,” Bouteflika announced in a message carried by the official APS news agency.

The veteran leader said he was responding to “a pressing demand that you have been numerous in making to me.”

Demonstrations against Bouteflika’s bid for another term have brought tens of thousands of protesters onto the streets for each of the last three Fridays, with smaller demonstrations taking place on other days.

The president vowed “to hand over the duties and prerogatives of the president of the republic to the successor freely chosen by the Algerian people,” but gave no date for new elections.

In a broader political shake-up, interior minister Noureddine Bedoui replaced the unpopular Ahmed Ouyahia as prime minister and has been tasked with forming a new government, according to APS.

And the country’s new deputy prime minister Ramtane Lamamra in an interview with RFI radio said the next elections would be “absolutely free” and called on all Algerians in the face of this “historic responsibility” to work together “for a better future”.

Bouteflika, whose rare public appearances since he suffered a stroke in 2013 have been in a wheelchair, returned to Algeria on Sunday after spending two weeks at a hospital in Switzerland.

Former colonial power France on Monday welcomed the president’s decision to not stand for a fifth term.

“France expresses its hope that a new dynamic that can answer the deep aspirations of the Algerian people will rapidly take hold,” Foreign Minister Jean-Yves Le Drian said.

Fatiha Benabou, a constitutional rights expert at the University of Algiers, said there was “no legal basis to postpone the elections”.

“In the case of a political crisis, the Algerian constitution is partially ineffective,” she said.

On social media, some Algerians were calling to continue the protests as Bouteflika says he’s not seeking re-election but remains in office.

“What does that mean, when he announces that he won’t seek a fifth term but he adds a year (to his current mandate?” said Ahmed Bekhti, a 28-year-old civil servant.

Earlier Monday barristers across the country joined the strike action. They demanded the Constitutional Council reject the 82-year-old’s candidacy on grounds of his “incapacity” to carry out the role.

Bouteflika’s return from hospital in Geneva came as protest strikes Sunday shut down the capital’s public transport system and many schools across Algeria.

The president had left Algeria on February 24 for what the presidency described as “routine medical checks”.

Since the breakout of protests last month, Algeria’s army chief, Ahmed Gaid Salah, has pledged to guarantee national security and criticised those he said want to return to the “painful years” of the civil war of the 1990s.

Bouteflika became president in 1999, and he has clung on to power despite his ill health.

When the Arab Spring uprisings erupted across the Middle East and North Africa, Bouteflika’s regime smothered dissent and played on fears of a repeat of Algeria’s civil war.

But those reforms, announced in “a climate of fear”, were shelved once the situation was brought under control, a European diplomat said.

Little by little, Bouteflika returned the regime to its authoritarian ways.

He was elected for a fourth term in April 2014 with 81.5 percent of the vote, despite not campaigning.

Bouteflika has a history of medical problems and has often flown to France or Switzerland for treatment.

Featured Photo: “Celebratory honking of car horns ran out in the centre of Algiers, after President Abdelaziz Bouteflika announced he would not seek re-election (AFP Photo/RYAD KRAMDI ).”