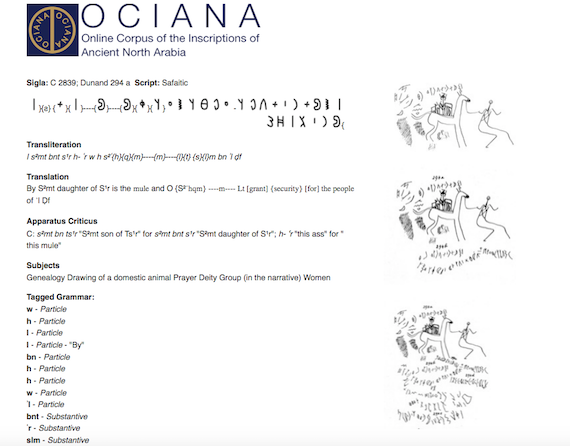 For Int’l Women’s Day, via OCIANA a Safaitic Arabic inscription [c. 1-400 AD], by a wealthy woman calling on two goddesses for peace:

This inscription from the first centuries after Christ in Arabia is remarkable in many ways. It seems to suggest that a woman carved it, which indicates literate women. This woman owned a mule, i.e., had property and was likely well off. Then, here is a woman calling on two ancient goddesses, the little-known Shahqam and the renowned Allat, asking them to bestow peace and security on her tribe. The inscription suggests a nexus of female power-knowledge even in late Antique Arabia.

The word for security or peace is salām, which Arabic-speakers still use as a greeting.

(-Note, I’m guessing at the voweling, since the original inscription only shows consonants and sometimes glottal stops, and am the furthest thing from a Safaitic expert, but I thought it would make the OCIANA transcription and translation easier to read for a general audience if I did guess at the vowels).

Note: My new book is a demonstration project for this New Historicism: