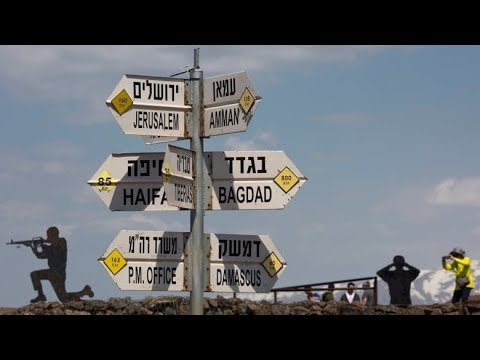 Human Rights Watch (Jerusalem) – A decision by the Trump administration to deny the reality of Israel’s occupation of the Golan Heights would demonstrate disregard for the protections due to the Syrian population under international humanitarian law, Human Rights Watch said. Particularly amid continuing, serious rights abuses by Israel in the Golan Heights, Syrian residents need the continued protections under the law of occupation, including the prohibition against building settlements and extracting natural resources for the benefit of the occupier.

In a March 21, 2019 tweet, US President Donald Trump indicated that a US decision to consider the Golan Heights – a region of Syria occupied by Israel during the June 1967 war – lawfully part of Israel was imminent.

“President Trump appears poised to drive a wrecking ball through the international law that protects the population of the occupied Golan Heights,” said Eric Goldstein, deputy Middle East and North Africa director at Human Rights Watch. “If Trump follows through, it may embolden other occupying states to double down on their own land grabs, settlements, and plunder of resources.”

Israel occupied the Golan Heights, a mountainous region of southwest Syria, along with the West Bank, Gaza Strip, and the Sinai Peninsula during the June 1967 war. That conflict resulted in the displacement of tens of thousands of Syrians who fled their homes in the Golan to other parts of Syria and whose return Israel has since blocked.

In 1981, the Israeli government unilaterally applied its own laws in the Golan Heights, a de facto annexation that the United Nations Security Council condemned in Resolution 497 as “null and void and without international legal effect.” The UN Human Rights Council has passed numerous resolutions affirming this position, most recently on March 22, and the Golan Heights remains “occupied” under international law. The fact that Israel offered Syrians in the Golan Heights Israeli citizenship, which most have declined, does not change the status of the territory as occupied. An occupation continues as long as the occupier maintains effective control over the territory and there is no widely accepted political settlement changing that status.

Under the laws of occupation, Syrians remaining in the Golan Heights – who number around 27,000 – are “protected persons.” International humanitarian law prohibits Israel, as the occupier, from transferring its civilian population into the occupied territory, destroying private property unless “absolutely necessary” for military operations, or appropriating resources. Occupying powers are also obligated to respect the human rights of the occupied population. In addition to international humanitarian law, international human rights law applies to situations of occupation, though limitations on certain rights are permitted if they are “strictly required by the exigencies of the situation.”

A state, including the occupier, cannot undo these protections and duties by a unilateral declaration, Human Rights Watch said.

Israel unilaterally annexed East Jerusalem in 1967, but no other country, including the United States, has recognized that annexation. Israel has not annexed the West Bank or the Gaza Strip, but some Israeli politicians, including the current Knesset speaker, have described the Golan annexation as a first step towards annexing some or all of the West Bank.

According to al-Marsad, a human rights organization based in the Golan Heights, Israeli authorities have established 34 settlements in the Golan Heights, housing at least 26,000 settlers, in violation of international humanitarian law. In a report for the March session of the Human Rights Council, the UN High Comissioner for Human Rights noted: “Syrian residents of the occupied Syrian Golan continued to face challenges due to discriminatory planning and zoning policies that favour illegal Israeli settlements. These policies make it nearly impossible for Syrian residents to build, plan or expand their homes and village infrastructure.” The March 22 Human Rights Council resolution further expressed “grave concern” at Israeli practices, including “the arbitrary arrests of Syrians, the lack of due process gurantees offered to Syrians and the unlawful mine-laying practices of the Israeli occupation forces in the occupied Syrian Golan,” and “deplore[d] the Israeli settlement expansion plans in the occupied Syrian Golan.”

To justify their likely forthcoming decision to consider the Golan Heights lawfully part of Israel, current and former US officials have cited, among other things, the Syrian government’s systematic human rights abuses against its own population, some of which amount to war crimes and crimes against humanity, and Iranian influence in Syria. But rights abuses by one state actor do not justify recognizing another state’s purported annexation. That Syrian residents of Golan have not been subjected to the atrocities that pervaded the Syrian government’s suppression of popular discontent does not and should not deprive those same residents of the rights entitled to them under international humanitarian law governing occupation, such as the above-noted prohibitions on transferring the occupier’s population, destroying property of the occupied population, and plundering its resources.

No other country has recognized Israel’s purported annexation of the Golan Heights. The European Union, European countries such as Germany and France, and the United Kingdom, among others, have recently reiterated they consider the Golan Heights occupied territory.

“Whether it be occupied Crimea, the West Bank, or Golan, the same principles protecting civilians apply,” Goldstein said. “Trump can’t wipe those away by decree.”