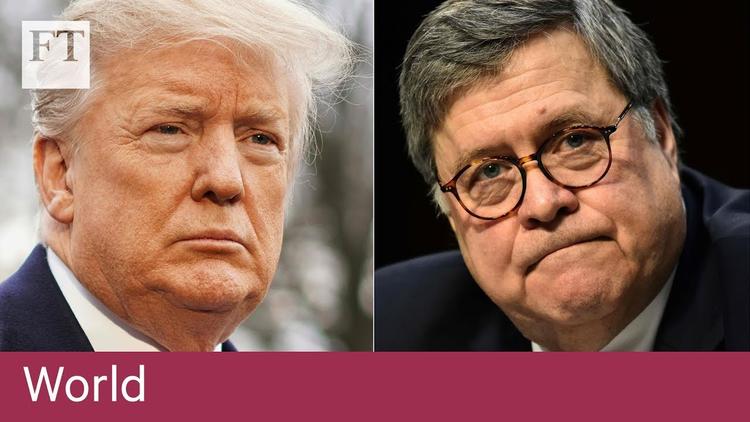 Special counsel Robert Mueller did not find evidence that Trump or his campaign colluded with the Russian government to interfere in the 2016 U.S. presidential election.

But Mueller, who submitted his report to the Department of Justice on March 22 after nearly two years of investigation, did not determine whether the president had obstructed justice during the FBI’s investigation into his campaign.

“While this report does not conclude that the president committed a crime, it also does not exonerate him,” the special counsel stated.

Mueller’s report has not been made public, but Attorney General William Barr does not share Mueller’s uncertainty about an obstruction charge. In a March 24 letter to Congress summarizing Mueller’s findings, Barr said he saw insufficient evidence to establish that the president had obstructed justice.

Democrats want to make their own determination about the evidence. They are now demanding that Barr’s office release Mueller’s report by April 2.

Truthfully, obstruction of justice is a complicated matter. As a law professor and one-time elected official, here’s how I’d explain the crime and its possible application to the president.

What is obstruction of justice?

According to federal law, obstruction occurs when a person tries to impede or influence a trial, investigation or other official proceeding with threats or corrupt intent.

Bribing a judge and destroying evidence are pretty classic examples of this crime.

Other actions may constitute obstruction, too, depending on the context. And some actions that look like obstruction of justice may not be, because the law requires an intention to obstruct as well.

President Trump did many things to influence investigations into him and his aides – but did he do so with “corrupt” intent?

After the FBI’s investigation of Russian election interference revealed that national security adviser Michael Flynn had lied, for example, Trump allegedly told FBI director James Comey, “I hope you can see your way clear to letting this go, to letting Flynn go. He is a good guy. I hope you can let this go.”

Flynn ultimately pleaded guilty of lying to the FBI about his conversation with Russia’s ambassador – an obstruction of justice crime – and is awaiting sentencing.

Soon after, Trump fired Comey, who was overseeing the FBI’s Russia probe.

How to determine criminal intent

That behavior may constitute obstruction of justice, but only if Trump pressured and later fired Comey for “corrupt” – meaning willfully improper – reasons.

Determining intent in an obstruction of justice case is often quite challenging for prosecutors, and it requires subjective judgment.

If Trump fired Comey in an effort to prevent the FBI from discovering incriminating information about him or his campaign, that would be “corrupt.”

Alternatively, Trump may have distrusted Comey because he thought he handled the FBI’s investigation of Hillary Clinton poorly, and consequently fired him. That would be his right as head of the executive branch of government.

The president has offered both explanations for dismissing Comey.

In a May 2017 interview with NBC News, the president said, “Regardless of recommendation, I was going to fire Comey” because of “this Russia thing.”

A few minutes later he said he fired Comey because “he’s the wrong man for that position.”

The objective of Trump’s statement to Comey about “letting Flynn go” is similarly ambiguous.

If the president was merely stating his hope that Flynn would escape the investigation unscathed, it would not constitute obstruction. But if this was Trump’s way of ordering Comey to clear Flynn, it would.

Other evidence of obstruction

Sometimes a single action or statement, standing alone, does not constitute obstruction of justice. But, when taken together with other actions, it creates a pattern of behavior that demonstrates corrupt intent.

For example, Trump publicly attacked Mueller, his investigation and other federal investigations into his campaign more than 1,100 times between March 2018 and Feb. 14, 2019, according to The New York Times.

Trump has the constitutional right to mount a “vigorous defense” to potential criminal charges and, under the First Amendment, to voice his opinions.

But the president’s behavior toward Comey looks more damning when viewed alongside his efforts to discredit the special counsel’s work.

Obstruction can occur even without collusion

Because it can be so difficult to discern a person’s intent, prosecutors often charge obstruction combined with other related charges.

In 1974, when the House of Representatives filed charges against President Richard Nixon as part of the impeachment process, it accused him of obstructive conduct that also violated other laws, including his authorizing payments to buy the silence of potential witnesses – bribery.

Nixon resigned and was given a presidential pardon for these crimes.

Similarly, in 1998, when the House of Representatives impeached President Bill Clinton on obstruction charges, it also charged him with perjury. He was acquitted on both counts.

This is important in Trump’s case because, in Barr’s view, if the president did not collude with Russia – as Mueller concluded – then there was nothing to obstruct.

“The evidence does not establish that the President was involved in an underlying crime related to Russian election interference,” Barr wrote to Congress, “and … the absence of such evidence bears upon the President’s intent with respect to obstruction.”

Legally, however, obstruction can still occur even in the absence of an underlying crime. President Trump might have interfered in the FBI and special counsel investigations not to protect himself from collusion charges but to protect members of his family or inner circle.

If Congress receives the full Mueller report, lawmakers will assess all evidence gathered during the 22-month special counsel investigation and together with their own investigation, make a determination about whether Trump obstructed justice.

They may agree with Barr that Trump did not intend to obstruct justice. But if there is a strong case that he committed that crime, Trump likely won’t face charges while in office because Department of Justice guidelines state that sitting presidents should not be prosecuted.

If obstruction charges are merited, therefore, Congress would have to raise them during an impeachment proceeding – a process House Speaker Nancy Pelosi so far opposes.

Alternatively, Trump could be charged with obstruction after he leaves office.