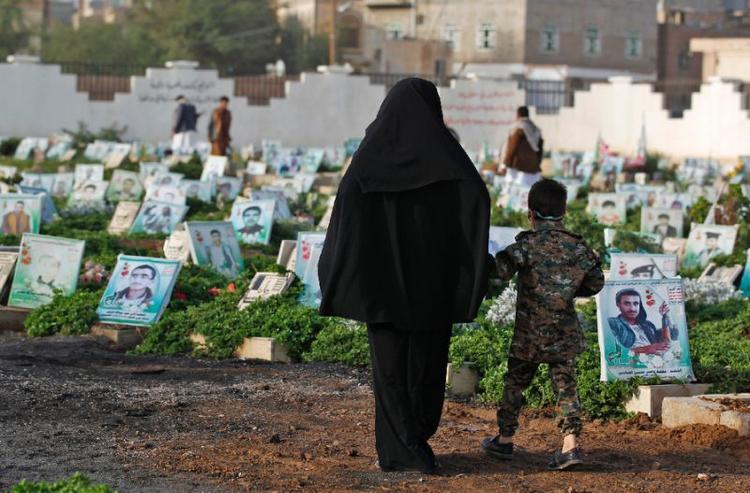 Sanaa (AFP) – Barefoot in a blue striped shirt, Ahmed al-Hamadi walks from school to a cemetery in the Yemeni capital where he works to help his family survive.

The 13-year-old makes his way through the cemetery, where graves are cramped together and overgrown with weeds.

Hauling gallons of water on his tiny shoulders, he waters plants and sprinkles tombstones to rid them of the Sanaa dust for a modest payment from the families of the deceased.

“We usually wait for funeral processions to work,” Ahmed told AFP. “If no one has died, we just hang around the graves and play around here.”

Ahmed is among millions of children struggling to stay in school in Yemen, where war, poverty and disease have brought the Arab world’s poorest country to its knees.

The Yemen conflict, which pits the government against northern rebels linked to Iran, took a turn for the worse when Saudi Arabia and its allies intervened on behalf of embattled President Abedrabbo Mansour Hadi.

March 26 marks four years since the Saudi-led coalition launched the military campaign to oust the Huthi rebels who occupied most of Yemen several months earlier — triggering what the United Nations calls the world’s worst humanitarian crisis.

– Children most at risk –

In the chaos of war, children are the most at risk and boys face being recruited as fighters.

Yemen has the highest level of child labour in the Arab world, both as a percentage and in sheer numbers, according to the International Labour Organization.

And in the chaos of war children are the most at risk, with girls facing forced marriage and boys recruited as fighters.

UNICEF, the UN children’s fund, called Yemen a “living hell for children” in 2018, with a whopping 80 percent of minors in need of aid.

The agency estimates that two million Yemeni children, out of an eligible seven million, are out of school as the war grinds into its fifth year.

Alongside the violence, Yemen’s already-fragile economy has contracted by over 50 percent since the escalation of conflict in 2015, according to the World Bank.

The currency has plummeted, and with it purchasing power.

Yemen’s private sector is all but dead and the government-run central bank has struggled to pay civil servants’ salaries despite over $2 billion of cash injections by Saudi Arabia.

Many families have had no choice but to rely on their children for income — sometimes as little as a few dollars a month.

Three years ago, Atiqa Mohammed was an officer in the Yemeni military. Today, she runs a little grocery store and more often than not her shelves are empty.

She had to turn a group of children away one March afternoon, with neither bread nor milk to sell them.

“The war has devoured everything,” she told AFP. “I don’t want much. Bread and tea would be enough, as long as it’s an honest living.”

The UN estimates two million Yemeni children, out of an eligible seven million, are out of school.

Three-quarters of Yemen’s population of 29 million are in need of humanitarian aid, with upwards of 10 million at the brink of mass starvation, according to the UN.

And in some areas, both government- and rebel-held, teachers have not been paid their wages since 2016. UNICEF stepped in this month, disbursing the equivalent of $50 per month to some 100,000 educators.

Ahmed is one of the luckier ones. His school still opens its doors to pupils in Sanaa, controlled by the Huthis since the rebels staged a takeover of Yemeni territory in 2014.

But when his father could not find work, it was up to him to help his family. He first tried street peddling before turning to the cemetery as a last resort.

Fifteen-year-old Yasser al-Arbahi also found himself working at the cemetery after his father had a stroke, putting his dreams of becoming a doctor on hold.

His days have become routine: wake up, attend class until noon, then head to the cemetery after lunch.

“If there’s a grave that needs to be cleaned, I’ll spray it down. Then on Fridays, I make sure I have water to sell to the families who come to visit the graves.”

The World Health Organization says 10,000 people have been killed over the past four years, but rights groups say the toll could be five times higher.

Some 10,000 people have been killed in Yemen over the past four years, according to the World Health Organization, although rights groups say the toll could be five times higher.

Both the Saudi-led alliance and Huthi rebels have been accused of acts that could amount to war crimes, while the coalition has been blacklisted by the UN for killing and maiming children.

By the tombstones in Sanaa, Yasser pays particular attention to cacti and flowers planted on the graves, taking the time to water them all.

He appeared thankful for the work: “Cemeteries are crowded with visitors.”