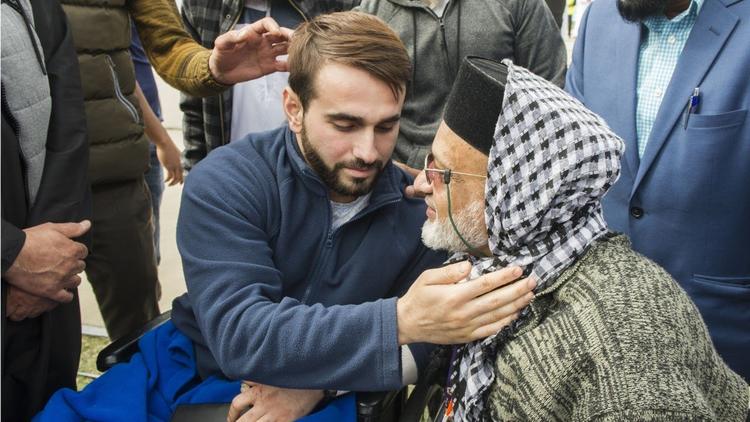 Ann Arbor (Informed Comment) – I confess that I was weeping uncontrollably as I posted the videos and the AFP wire service story on the memorial service in Christchurch, New Zealand for the 50 shot dead in a horrific Islamophobic massacre. I’m a big Polynesia fan and the Maori music is so haunting and beautiful. And Prime Minister Jacinda Ardern speaks with such wisdom and healing and compassion. Her leadership has awed the whole world.

But what stood out was the soft-spoken words of Farid Ahmed, who deploys a wheelchair and whose wife Husna was killed as she rushed back into the mosque to rescue her husband.

“I am choosing peace and I have forgiven,” AFP quotes him as saying. “People ask me, ‘why do you forgive someone who has killed your beloved wife?’”

“I can give so many answers… Allah says if we forgive one another he loves us.”

AFP adds, “Ahmed said people from different cultures were like flowers and ‘together we are a beautiful garden’.”

Those who do not know the Qur’an, the Muslim scripture, well, or who know it only by the badly translated, out-of-context snippets spread around the internet by Islamophobes, seldom have an appreciation for how warm and loving a book it is. I am amazed by those who think of it as ‘bleak.”

“The Qur’an (Distinguished 41:34) advises: “Good and evil are not equal. Repel the latter with the highest good, and behold, your enemy will become a devoted patron.”

The chapter of The Criterion (25:63) praises Muhammad’s followers for their self-restraint in the face of provocations, speaking of “the servants of the All-Merciful who walk humbly upon the earth—and when the unruly taunt them, they reply, ‘Peace!’”

Consultation 42:40–43 counsels forgiveness even when the family of victims is in a position to demand punishment: “The retribution for a wrong is a wrong the like of it, but God will recompense whoever pardons and makes peace; surely he does not love wrongdoers. One who insists on retribution after being wronged cannot be reproved, but the way is only open against those who do wrong to people and transgress in the land without any right; there awaits them a painful chastisement. Still, truly the one who is patient and forgives displays steadfastness.”

Names of God are fashioned from both roots, so that the Deity in Islam is forgiving, merciful and compassionate.

Moreover, human beings are urged to take on these divine attributes.The Qur’an (The Cow 2:138) advises, “Take on the dye of God, and what dye is better than that of God?” People in late antiquity thought that you take on the attributes of the things you think about. If you think about the divine attributes, you can reflect them in your pale human manner. Plato in The Republic also compared the training of youth in virtues to dying wool with fast colors.

Consultation 42:5 says (A. J. Arberry’s translation): “The heavens wellnigh are rent above them, when the angels proclaim the praise of their Lord, and ask forgiveness for those on earth. Surely God — He is the All-forgiving, the All-compassionate.”

The Qur’an says it is angelic to ask forgiveness for everyone who dwells on earth.

Of course, these high ideals of the Qur’an are no easier to live up to than those of the Bible.

But from what we have seen this week, some people do indeed come to exemplify virtues advised in that book.

For those interested in finding out more about themes of peace and compassion in the Qur’an and the life of the Prophet Muhammad, there is this: