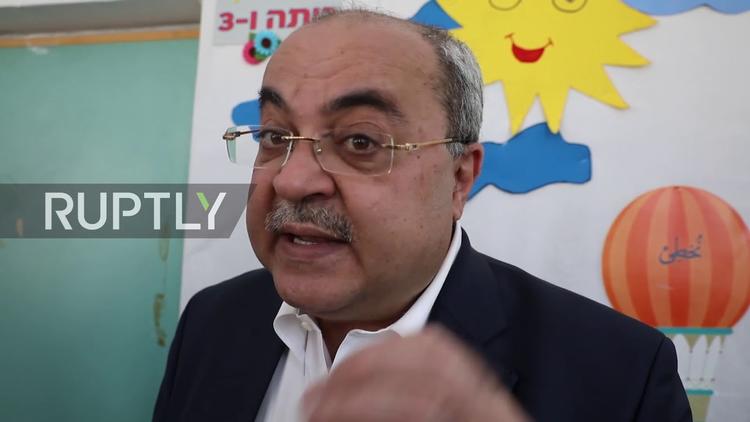 An Israeli public relations firm has admitted that it was behind the Likud campaign to place secret cameras in Arab-Israeli polling stations during Tuesday’s election, boasting that the move caused low turnout among Palestinian citizens of Israel.

The Kaizler Inbar PR company said yesterday on its Facebook page that it had orchestrated the stunt, explaining: “After a long preparation period, an amazing logistical base and deep and close partnership with the best people in Likud, we put together an operation that contributed crucially to one of the most important achievements of the right-wing bloc: Keeping the Arab vote legal!”

The firm then went on to brag that “thanks to us placing observers in every polling station, we managed to lower the voter turnout [among Palestinian citizens of Israel] to under 50 percent, the lowest in recent years,” Haaretz reported.

The Facebook post also included a picture of the firm’s two leaders, Sagi Kaizler and Ofer Inbar, sitting with Israeli Prime Minister Benjamin Netanyahu and his wife Sara. Kaizler was previously the head of an Israeli settler group in the occupied West Bank, the Samaria Citizens Committee, and has a history of anti-Palestinian rhetoric. During the 2015 election, Kaizler said:

Arabs are sitting alone in the polling station, we don’t trust them. We let them vote in our country even though it’s our country, they should at least vote truthfully.

I24 news added that: “Kaizler Inbar even lists the campaign as one of their clients, among others that include many settler causes, Jerusalem mayoral candidate Ofer Berkowitz and free Israeli daily newspaper Israel Hayom,” which is known to have strong links with Netanyahu.

Kaizler Inbar’s revelation came after Netanyahu’s Likud party admitted during Tuesday’s election that it had given over 1,000 cameras to activists to guarantee a “kosher” voting process in Arab-Israeli towns. The discovery of the cameras was met with anger by Arab-Israeli voters, with the predominantly Arab Hadash-Ta’al alliance filing a complaint to Israel’s Central Elections Committee, the body which oversees the country’s election process.

Chairman of the committee Judge Hanan Melcer then filed a complaint to Israel Police, which has now opened an investigation into the affair. However, as i24 news points out, Kaizler Inbar’s Facebook post was not taken down as of this morning “showing that, despite the nature of the claims, neither Likud nor the activists were worried about the political fallout”.

That the move is believed to have contributed to low voter turnout among Palestinian citizens of Israel added to an already-difficult situation for the Arab-Israeli alliances Hadash-Ta’al and Ra’am-Balad. In the run-up to the election, commentators predicted that Arab-Israeli turnout would struggle to reach 50 per cent, and for large parts of the day these voters stayed away from polling stations, driving turnout below 2015 election levels.

MK-elect Ofer Cassif – Hadash-Ta’al’s only Jewish candidate – yesterday told MEMO: “I think the real incentive behind this move was not to take pictures or videos of voters — because it was easy to discover the cameras — but rather to spread fear among [Arab-Israeli] voters. This is in absolute contradiction of fair elections, so I think it must be investigated and perhaps some ballots ought to be recounted.”

Head of Hadash-Ta’al, veteran MK Ayman Odeh, echoed Cassif’s sentiment speaking to Haaretz today, saying: “Now its official – the Likud tried to lower the Arab turnout through illegal means. Hidden cameras, monitoring and voter suppression. This is what de-legitimization of a fifth of the citizenry looks like.”

The official results of the election are expected today, but with 95 per cent of the vote counted, the Hadash-Ta’al alliance holds six seats, while Ra’am-Balad holds four. Though this came as a relief given the fact that several exit polls predicted Ra’am-Balad would not cross the 3.25 per cent minimum threshold needed to sit in the Knesset, the alliances’ combined ten seats is still less than the 13 held by the now-defunct Joint List to which they previously belonged.