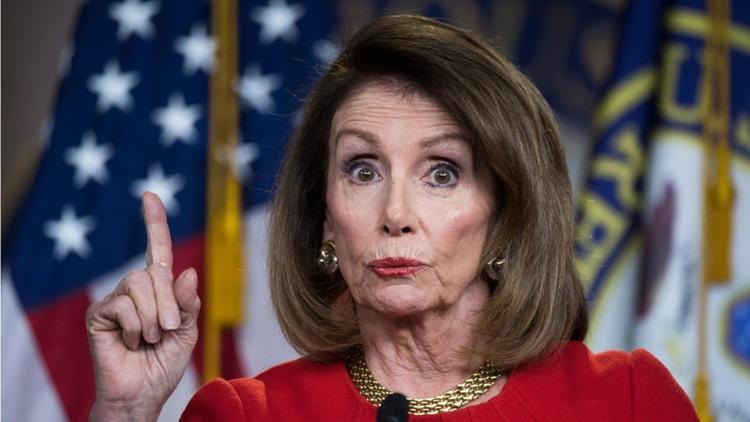 Nancy Pelosi’s response to Donald Trump’s tweet lying about Ilhan Omar and maliciously twisting her words to make her seem virtually an al-Qaeda sympathizer was so anodyne that Pelosi didn’t even mention Omar’s name.

Gallup polling shows that only about half of Democrats identify as “liberal,” whereas 36 percent say they are “moderate,” and 13 percent actually say they are “conservative.”

The Democratic Party leadership has Mondale syndrome. They still think it is dangerous for the party to have an out and out liberal as its face and they are still afraid of Reagan Republicans.

Both Democratic presidents during the past 40 years were centrists, which is one reason the country has in its policies and its judicial rulings ratcheted so far to the right. The Republicans are often captured by the far right, a witches brew of petulant plutocracy and lower middle class white grievance. They pass laws reducing taxes on the superwealthy, making them more superwealthy, and gutting environmental and consumer protections, and taking services and aid away from the person in the street. They then defend these far right wing laws and measures while they are in the minority, keeping enough seats in the Senate to block any Left counter-legislation, or using the GOP president’s veto. Since even when they get in, the Democrats are only centrists, they don’t even try very hard to shift things left. So US politics is like a crab walking, always as much to the right as forward.

The Democratic leadership believes that a centrist Clinton or Obama is the best we can do, and running one might occasionally allow the Dems to take the White House or a chamber of Congress.

They are happy to have the 26% of votes belonging to liberal voters. But they hold that that isn’t a national program. They need the moderates, and even conservatives (as I remember, 10% of the votes for Obama in 2008 were conservative, and on many issues they weren’t wrong to vote for Obama.)

What the Democratic leadership does not realize is that politics in the swing states– Michigan, Ohio, Florida, etc.– has gone sideways. Bernie Sanders could almost certainly win them all against trump. A milquetoast centrist probably cannot. Dems can take California, New York and Massachusetts for granted. But they cannot take the Rust Belt for granted, and the Rust Belt is tired of politics as usual.

The Republicans are attempting to tag the Democratic Party as the party of Muslims and to imply that it makes the party unpatriotic and anti-Semitic. The prominence of Ilhan Omar and her searing leftwing critiques of the miserable status quo are seen by Trump and Kevin McCarthy and Mitch McConnell as an opportunity to Mondalize the Democrats.

I think both the Democratic leadership and the GOP are wrong, and that they are misreading 2016. Americans are tired of the forever wars, tired of plutocracy, tired of not being able to make ends meet, tired of not having affordable health insurance. That is the real message of 2016 and 2018. These issues grip them beyond the liberal, moderate and conservative labels. McConnell is alleged now to be urging Republicans to run on their own rather than tying themselves to Trump, smelling blood in the water.

If the Democratic leadership were smart, they’d come out vocally in Omar’s defense and do a photo op with her at one of her events for the working class or for the 9/11 firest responders. She cares about those people, she is from poverty and displacement. She is authentic. The Democratic leadership is tied to corporations and big banks and big money. If they run on that, as they did in 2016, Trump will have them for lunch.