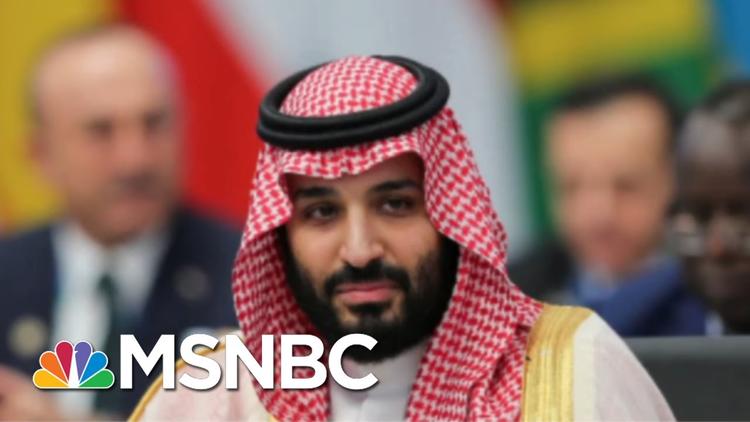 Ann Arbor (Informed Comment) – Amazon CEO Jeff Bezos’ security team has alleged in The Daily Beast that Saudi Arabian intelligence hacked his phone and passed to the National Enquirer intimate photos that the married Bezos had sent to his lover, Lauren Sanchez. Although the Enquirer’s parent company, AMI, has alleged that it received the material from Sanchez’s brother, this allegation may be be a cover story intended to deflect attention from the Saudi role (of which AMI may or may not have been aware. AMI reiterated its denials after the Daily Beast story appeared.

Bezos owns the Washington Post, which has often been critical of Trump, who in turn has viciously attacked the newspaper and its owner.

Saudi Crown Prince Mohammed Bin Salman established a strong relationship with Trump and his son-in-law Jared Kushner in 2017, which had been prepared for by the de facto head of the United Arab Emirates, Mohammad Bin Zayed, who secretly flew into the US after the November election to meet with Trump officials.

It has been alleged that the crown prince targeted expatriate Saudi journalist Jamal Khashoggi in part because he had written critically about Trump at the Washington Post, where he was given a column after he fled Bin Salman’s increasingly dictatorial government.

Post columnist David Ignatius, considered close to the CIA, revealed that Khashoggi himself was hacked by a cyber espionage ring run from Riyadh by Saud al-Qahtan, one of Bin Salman’s chief lieutenants. Al-Qahtan had assembled a suite of hacking tools from Italy, Israel and the United Arab Emirates.

Here’s another corner to the conspiracy: allegations keep surfacing that Trump’s son-in-law, Jared Kushner, attempted to get Qatar to take a billion-dollar white elephant, 666 Fifth Avenue, off his hands. He and his father had purchased the building for way too much money, and were not able to get their money back. A balloon payment was coming due, and they were desperate to unload the property. They approached Qatar, but its investment fund knows a pig of an investment when it sees one.

So the allegation is that Kushner conspired with Bin Salman, who had his own reasons to be annoyed with Qatar, to frame Qatari Emir Tamim Bin Hamad for terrorism and Iran ties, and to put his country under blockade or even invade and take it over.

The June 5, 2017, attack on Qatar involved hacking into the state broadcasting facilities and altering the speech Tamim gave. It is also alleged that the Saudis hacked the smartphones of the emir and his circle.

Qatar, under siege and blockade, may have greenlighted an investment company in which it has an interest to lease the Kushner property.

With the Kushners mollified, Trump suddenly began tweeting positively about Qatar, after having branded it a font of terrorism when the blockade was launched.

So Emir Tamim of Qatar was hacked to benefit Trump and his in-laws.

Then Khashoggi turned critical of Trump, and he was hacked by al-Qahtan’s team, and then the order went out to murder him.

Then the Saudi hackers went after Bezos, obtaining photos of him naked, and broke up his marriage, costing him half his fortune, because of the Washington Post’s criticism of Trump and possibly because it wouldn’t let Khashoggi’s murder go.

Trump dirty tricks and influence-peddling abroad are reshaping the globe.