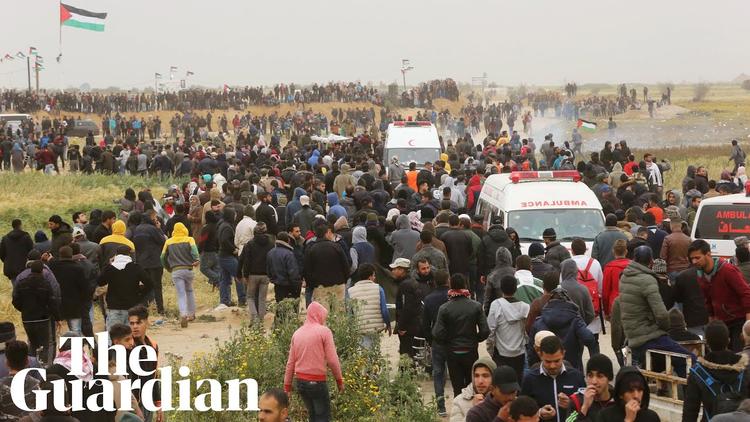 ( Human Rights Watch) – On Saturday, Palestinians in Gaza will head to the fences with Israel that effectively serve as their prison wall– as they have done for over a year, since they began weekly demonstrations against Israel’s more than decade-long closure of Gaza. I’ve spent much of the past year speaking to men, women, boys, and girls who participated in the demonstration, often in hospitals, as part of Human Rights Watch’s investigation into the protests and Israel’s response to them.

The sights and sounds haunt me. Screams of protesters who have only over-the-counter drugs for their pain as they await surgery as doctors prioritize even more serious injuries. Tears of families grieving the deaths of loved ones. A high-school student’s joy showing me a video of him singing beautifully as he lay in a hospital bed with a leg injury with his mother weeping beside him.

The protests, known as the “Great March of Return,” commemorate the expulsion and flight of hundreds of thousands of Palestinian refugees when Israel was established in 1948. Today, the majority of Gaza’s population are these refugees or their descendants, all of whom the United Nations considers refugees.

The United Nations Commission of Inquiry on the 2018 Gaza protests determined that Israeli forces had killed 189 protesters in 2018 and wounded more than 6,000 with live fire between March 30 and December, “many while standing hundreds of meters from the snipers.” The snipers, as one commissioner put it, “shot at unarmed protesters, children and disabled persons, and at health workers and journalists performing their duties, knowing who they are.”

The commissioners concluded that, while demonstrations were “at times violent,” 187 of those killings were unlawful ­ cases in which protesters didn’t pose an imminent threat to life or where force was “neither necessary nor proportional” ­ and that Israeli forces may have committed war crimes and crimes against humanity.

Human Rights Watch did not investigate every case, but found that Israeli forces repeatedly fired on protesters who posed no imminent threat to life, pursuant to expansive open-fire orders from senior officials that contravene international human rights law standards, acts that may amount to war crimes, since international humanitarian law applies given Israel’s continuing effective control over Gaza.

Every protester has their own story:­ a footballer I spoke with who was shot in the leg and was awaiting treatment outside of Gaza so he could again play the game he loved. A photojournalist friend struck in the eye by a teargas canister while covering a demonstration in December and unable to work since his injury. But there were common threads: barely getting by economically, never having left Gaza, yearning for the chance to live in a dignified manner. Will anyone listen?