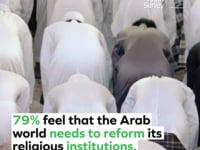 Ann Arbor (Informed Comment) – A just-released survey of youth (aged 18-24) in 16 Arab countries has found that 66% of them say there is too much religion in public life.

Further, fully 79%, almost 4 in 5, say that the Arab world desperately needs to reform its religious institutions.

Fully half said that religion is a brake on development in the Arab world.

Assuming that they don’t change their minds as they age, members of the Gen-Z appear likely to craft societies that are significantly less religious than current ones.

The figure came as a surprise to me. When I was researching The New Arabs, I noticed that Lebanese and Tunisian youth were significantly less observant than their elders. My colleague Mark Tessler and his partners found that in Sunni Iraq in 2012, three-quarters of the respondents wanted less religious influence on politics (which makes it extremely ironic that they were two years later taken over by ISIL). But Egyptians, for instance, reported themselves very religious.

It is possible that the events of the Arab Spring and especially episodes such as the unpopular Muslim Brotherhood administration in Egypt 2012-2013, the turn of Syrian rebels to extremism, and the rise and dramatic fall of ISIL have pushed this cohort of youth more toward a secular vision of society and encouraged skepticism of religious institutions.

It is also possible that the Youth Revolts of 2011-2013, and now again in 2019 in Algeria and the Sudan (the latter was not surveyed) made the youth more skeptical of religious institutions, many of which sided with the dictators.

Another possible contributor to this change is the influence of Muhammad Bin Zayed of the United Arab Emirates and Muhammad Bin Salman of Saudi Arabia. They have spent a lot of money and political capital trying to undermine the Muslim Brotherhood, and perhaps they have succeeded beyond their widest imaginings. The entire Egyptian government is ranged against that kind of populist political Islam, and President Abdel Fattah al-Sisi has been demanding reforms of Sunni religious institutions in Egypt.

Another finding: in 2015-2019, the youth who said social media is a significant source of news went from a quarter to 80%.

As for the problems facing youth in Arab societies, they ranked rising cost of living at 56%, then unemployment at 45%. Only about a quarter worried about lack of democracy.

The web site says the survey “covers five of the Gulf Cooperation Council states (Bahrain, Kuwait, Oman, Saudi Arabia and the UAE), North Africa (Algeria, Egypt, Libya, Morocco, and Tunisia), the Levant (Iraq, Jordan, Lebanon and the Palestinian Territories) and Yemen. The survey did not include Syria due to the civil unrest in the country.”

Typically about 200 persons were interviewed from each country, geographically and gender-wise balanced for a representative sample. Egyptians and Saudis were slightly over-represented, making the findings about views of religion even more significant.