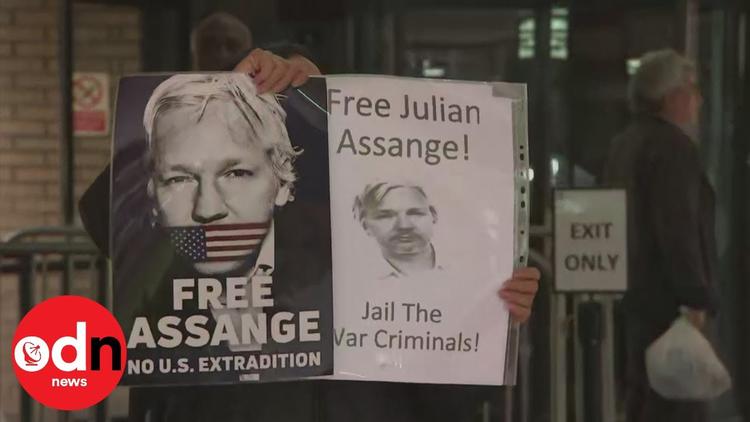 A British court on Wednesday sentenced Julian Assange to almost a year in prison for jumping bail.

That’s not the end of Assange’s legal problems: On May 2, Assange, the co-founder of WikiLeaks, will appear at a London court in relation to his requested extradition to the U.S.

The publication of classified information violates a number of federal laws, including the Espionage Act. The act imposes up to 10 years of imprisonment for every violation of its various provisions.

But at least for now, the U.S. has not charged Assange with any such violations.

Instead, the United States indicted Assange for conspiring with Chelsea Manning, the former United States Army soldier convicted of leaking classified documents, to hack into a government computer and obtain classified information.

Why has Assange not been charged with the more serious crimes of publishing American secrets?

One reason is the questionable constitutionality of such charges. They may violate the First Amendment to the U.S. Constitution, which prohibits the government from “abridging the freedom of speech, or of the press.”

Accordingly, the American government has traditionally abstained from charging publishers of classified information for the crime of publication. The one near-exception occurred in 1942, in the middle of World War II, after the Chicago Tribune published a front-page story titled “Navy Had Word of Jap Plan to Strike at Sea.” The story implied that the U.S. military had cracked Japan’s secret naval code – which in fact it had.

An incensed President Franklin Roosevelt demanded that Espionage Act charges be brought against the reporter, the managing editor and the Tribune itself. But a grand jury refused to issue indictments.

In 1972 the U.S. government tried to stop The New York Times and The Washington Post from publishing the Pentagon Papers, a top-secret Department of Defense study on the Vietnam War.

In its well-known decision, the Supreme Court held that preventing the publication violated the First Amendment. Less known is the fact that a majority of the justices also thought that the newspapers could be prosecuted and possibly punished for the publication, even if stopping the publication was unconstitutional.

The Pentagon Papers decision was about the ability of government to stop the publication of information – in other words, its ability to impose a “prior restraint.” It left open the possibility of punishing publishers after the publication.

On the other hand, a number of later Supreme Court decisions did protect publishers who had published truthful information in violation of the law.

These publications were all protected by the freedoms of speech and the press.

However, none of these later cases dealt with publication of national security information, and the outcome may be different when it comes to such materials. That would depend on the specific dangers or harms posed by the publication: for example, on whether lives were endangered, or whether the government was simply trying to prevent embarrassment to itself.

Some judges, however, would likely simply defer to the government’s assessment of these dangers.

“In my judgment the judiciary may not … redetermine for itself the probable impact of disclosure on the national security,” wrote Justice John Marshall Harlan for himself and Justices Harry Blackmun and Warren Burger in the Pentagon Papers decision. Some of today’s Supreme Court justices – Justice Clarence Thomas, for example – are likely to agree with Harlan’s position.

Still, as of today, Assange’s indictment does not include charges of criminal publication. Assuming that the indictment is left unchanged, the question remains: Is the current charge – a conspiracy to hack into a government computer – a danger to the freedom of the press?

Nothing in Assange’s indictment turns on any distinction between WikiLeaks and the mainstream press. The current charge would be equally applicable to “real” journalists if they engaged in similar conduct.

And yet, Assange is not charged with helping Manning hack into a computer.

He is charged with agreeing to help Manning hack into a computer – whether there was or wasn’t any hacking attempt. The essence of the crime of conspiracy is agreement to commit a crime, irrespective of whether that crime was in fact attempted.

Federal conspiracy charges also require that some action be taken toward committing the crime. But that action can be utterly minor, fall far short of an actual attempt, need not be itself criminal, and may be undertaken by any of the co-conspirators with or without anyone’s knowledge.

Moreover, conspiracy can exist even without explicit words of agreement: It can be inferred. For example, from the fact that a passenger exited a car, robbed a pedestrian, then returned to the car and was driven away, it was permissible to infer that the driver conspired to commit robbery (a criminal offense wholly independent of the robbery itself).

Do legitimate journalists sometimes engage in criminal conspiracies with their sources? Of course: Every time a journalist receives and publishes classified national security information, she can be said to conspire with her source to disclose classified information, which is a crime.

In fact, the federal government had already advanced such a conspiracy claim in regard to a journalist.

In 2009 Fox News reporter James Rosen wrote an article that contained leaked classified information about North Korea. In 2010 the Obama administration filed a search warrant application where it argued that Rosen was a criminal co-conspirator of his State Department source in the criminal disclosure of classified information.

The warrant was granted, although Rosen was never indicted for the alleged conspiracy. Indeed such an indictment would have raised similar constitutional difficulties to those implicated in the criminal publication of classified information.

Nevertheless, Assange’s indictment can be a dangerous precedent if the government views it through a broad lens: namely, as a charge about a criminal conspiracy to obtain classified information. In that case, legitimate journalists may also be on the hook.

In fact, it is rather clear that the government takes a broad view of Assange’s indictment. After all, clearly Assange is prosecuted because of WikiLeaks’ publication of classified information, even if the government is still reluctant to indict him for that.

And the broad view is also implied in the statements of Jeff Sessions, who as attorney general made prosecuting Assange a priority.

When testifying before the Senate Judiciary Committee in 2017, Sessions was asked whether he can “commit to not jailing reporters for doing their jobs.”

He responded: “I don’t know if I can make a blanket commitment to that effect, but I would say we have not taken any aggressive action against the media at this point.”

With Assange’s indictment, they finally may have.