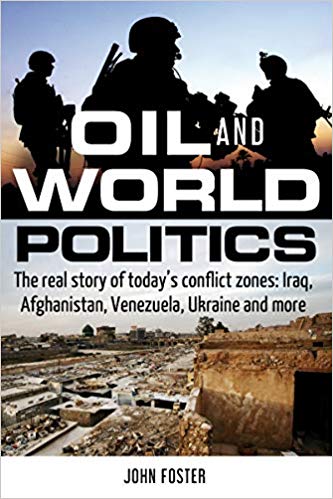 (Canadian Center for Policy Alternatives Monitor) – When we talk about today’s geopolitical hotspots, we need to talk about petroleum

AT THE UN General Assembly in 2018, Austrian Foreign Minister Karin Kneissl broke an unwrit-ten taboo by talking about oil and war. “The recent wars imposed on the Middle East were…fought in the name of oil. Now Syria is a victim of the instability created by all these wars.” For decades, petroleum issues (related to both oil and natural gas) have remained a largely ignored as-pect of disputes. In fact, global rivalry over petroleum goes back to the be-ginning of Middle Eastern exploration.

Petroleum is the lifeblood of modern economies, the most important com-modity in world trade, and a source of enormous wealth. Since the terrorist attacks on the U.S. of September 11, 2001, petroleum has been part of numerous interventions and clashes. Iraq, Libya, Iran and Venezuela have vast petrole-um resources. Afghanistan, Syria and Ukraine have a strategic location for pipelines. Somalia and Yemen border strategic sea routes for petroleum

All these countries are caught up in rivalries among the U.S., China and Russia. The U.S. sees itself as an ex-ceptional country, entitled to control the seas and take action anywhere in the world. U.S. Secretary of State Mike Pompeo said recently, “when America leads, peace and prosperity almost certainly follow.” Americans see their global reach as benevolent, but some countries around the world see it otherwise.

Venezuela has the world’s largest oil reserves. Iran has the world’s fourth largest reserves of oil and the second largest of gas. The two countries have been in Washington’s crosshairs for decades. Oil is an economic weapon: Washington wants to shut down Venezuelan and Iranian petroleum exports completely. It wants regime change.

U.S. National Security Adviser John Bolton was explicit on this point in an interview with Fox Business earlier this year. “It will make a great difference to the United States economically,” he said, “if we could have American oil companies really invest in and produce the oil capabilities in Venezuela.” The neoconservative hawk later warned other countries and companies not to buy oil from Venezuela.

Oil and regime change were unmentioned reasons for the Iraq and Libyan wars. Though former U.S. president George W. Bush insisted at the time that his illegal 2003 invasion of Iraq was not about oil, now the evidence that it was is overwhelming.

Already in 2001, the State Department had created a working group to formu-late a new oil policy for a liberated Iraq that would open the sector to international oil companies. Speaking in 2007, the retired U.S. general John Abizaid, former head of U.S. Central Command, said, “Of course it’s about oil. Oil fuels a lot of geopolitical moves.” In the U.K. it fuelled the pre-war deliberations of the Blair government, according to journalist Greg Muttitt, who learned the Foreign Office was “determined to get a fair slice of the action for British companies in a post-Saddam Iraq.

”The NATO war on Libya was packaged and sold under a Responsibility to Protect label. Libya happens to have the world’s ninth largest oil reserves, and its oil is top quality. Libya’s late president Moammar Gadhafi had used the oil wealth to Libyan advantage, providing health care and education for all. Under the leadership of a Ca-nadian general, NATO flew 9,700 strike sorties, devastating Libya’s infrastruc-ture. After the intervention, Libya was fragmented, bankrupt, in crisis. Eight years later, its oil exports are sporadic and still a source of fighting among rival factions. Libya is a failed state.

The U.S., China and Russia dominate the world’s geopolitics. Each of these powerful countries has its own reasons to be concerned about oil and gas.

The United States is the world’s largest user of petroleum and regards the resource as a vital interest. It forges strategic relationships with produc-ing countries, notably Saudi Arabia, and pays extraordinary attention to petroleum in its foreign policy. Washington has literally hundreds of officials monitoring world energy — at the departments of state, energy, commerce, and at the National Security Council, Pentagon and CIA. No other government matches this scale of coverage. For many decades the U.S. has benefited economically from the use of the U.S. dollar in world petroleum trade. It wants U.S. dollar dominance to continue.

With its fracking boom of the last decade, the U.S. has become the world’s largest oil producer, dramatically reducing its dependence on foreign sources — from 60% of consumption in 2005 to 19% in 2017. Today, the U.S. is the world’s second largest oil importer, with Canada providing almost half of those imports.

China is the world’s largest oil importer. Its major concern is potential blockades of sea routes bringing oil from the Middle East. With its NATO allies, the U.S. patrols several narrow waterways including the South China Sea. To reduce its vulnerability, China has invested in alternative routes —huge oil and gas pipelines from Central Asia, others from Siberia, and yet others across Myanmar.Russia is a petro-state and the world’s largest exporter of both oil and gas. Pipelines and sea routes to market are vital to its economy.

Russia is building pipelines from Siberia to China and trying to build more to Europe. Some of Russia’s plans have been thwarted by the U.S. government and European Commission. Russia and China have joined in strategic co-operation, concerned about U.S. policies of containment. U.S. Interior Secretary Ryan Zinke said in September that the U.S. Navy can blockade Russia if needed, “to make sure that their energy does not go to market.

”The U.S. used to import liquefied natural gas (LNG). Now, with a dra-matic expansion in production of fracked gas, it wants to export its LNG to Europe, which would displace Russian exports. Europe is a vital energy market for Russia. The U.S. sees this as a wedge issue to be exploited.

In the Soviet era, pipelines to export gas were built via Ukraine. Today, facing a hostile government in Ukraine, Russia plans new gas pipelines bypassing it to the north and south. The U.S. claims the new pipelines threaten European energy security. Secretary of State Pompeo says the U.S. will do everything in its power to stop the Nord Stream 2 project from bringing gas from Russia to Germany. Included are threats to place sanctions on participating European corporations.

Natural gas is prized for its clean burning and low sulphur content. It is environmentally less air-polluting than liquid fuels and much less so than oil sands bitumen. To reduce horrendous air pollution, China is abandoning coal and switching to natural gas. As the world’s third largest producer of gas, Canada is looking to export gas from British Columbia to China. It is also hoping to export oil sands bitumen there via the Trans Mountain pipeline expansion. Canada’s arrest of Huawei’s Meng Wanzhou chilled relations with China, with implications for future trade.

Petroleum rivalry among countries is like a game, as I describe in my new book, Oil and World Politics

In this game, governments take actions to improve their own geopolitical advantage vis-à-vis others. Actions may be overt or covert, diplomatic, economic or military, promoted by a country itself or through proxies.

Petroleum features in America First policies. In 2017, sounding a bit like Canada’s last prime minister, President Donald Trump said the U.S. “will seek not only American energy independence … but American energy dominance.” In oil trade, four countries — China, Russia, Iran and Venezuela — are moving away from petrodollars, the crucial driver of U.S. world financial dominance. When Iraq and Libya threatened to abandon the petrodollar, they were attacked.

Under the UN charter, wars for resources are illegal. Perhaps that’s why petroleum has been largely ig-nored. Petroleum features in big power politics, intelligence gathering, regime change efforts, diplomatic discussions, even sanctions. Petroleum, power and politics all go together. Petroleum is the rarely-mentioned aspect of conflict stories. Its role in ongoing disputes deserves exposure.

John Foster is an international petroleum economist and the author of Oil and World Politics (Lorimer, 2018). The book documents the petroleum connection in today’s conflict zones – Iraq, Iran, Afghanistan, Venezuela, Ukraine and more. Working at the World Bank, Inter-American Development Bank, Petro-Canada and BP, he witnessed the impact of petroleum geopolitics in more than 30 countries