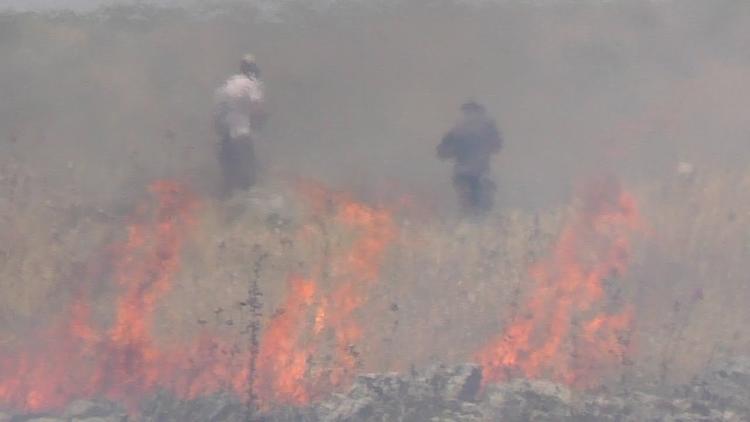 The Spokesperson’s Unit of the Israeli army was yesterday forced to change its original statement, in which it claimed to have extinguished “a fire set by Palestinians”.

The fires were started last Friday near the occupied West Bank villages of Burin, Urif and Asira Al-Qibliya, all located off Route 60 south of Nablus. Illegal Israeli settlers from the nearby settlement of Yitzhar had attacked Palestinians from these villages, with both groups subsequently blaming the other for causing the fires which followed.

Contradicting the Israeli army’s claim of Palestinian culpability, video footage released by B’Tselem showed “two Israeli [settlers] — one of them armed with a Tavor assault rifle — entering grasslands, crouching down and walking away. Moments later, flames can be seen in the area where they’d been standing,” the Times of Israel reported.

B’Tselem added that “[Israeli] soldiers who were standing next to [the settlers] did not arrest them and prevent[ed] the Palestinians from reaching their burning lands”. In a separate video, settlers can also be seen throwing rocks at nearby Palestinian homes while four Israeli soldiers stand idly by.

B’Tselem stressed that the Israeli army had granted “almost total immunity” to the settlers involved in the attacks, noting that none were interrogated or arrested following the incident.

Although the Israeli army today issued a new statement saying “several fires were set and quickly spread” and that, “in addition to the fires, some 20 settlers went down to the outskirts of Asirah Al-Qibliyah and began throwing rocks,” it did not admit its attempts to cover up the settlers’ attacks. The Israeli army also refused to comment on why no settlers had been arrested for the arson.

This is not the first time the Israeli army has been found to have covered up settler attacks against Palestinians in the occupied West Bank.

Last month, B’Tselem found that the army had covered up the killing of 23-year-old Mohammed Abd Al-Fatah, who was shot by illegal settlers near Huwara – again located off route 60 – on 3 April. Though media reports at the time stated that a “would-be Palestinian attacker was shot dead […] during an attempted stabbing near Huwara,” B’Tselem’s investigation revealed that in fact Abd Al-Fatah was killed at close range by armed Israeli settlers.

B’Tselem detailed how, at 08:30 local time [06:30 GMT], Abd Al-Fatah “started throwing stones at cars bearing Israeli license plates”, one of which hit an Israeli settler’s car. The driver pulled over, “then two gunshots were heard, apparently fired from inside the vehicle”. The settler then got out of the car and “fired several more shots” at Abd Al-Fatah, with the help of a truck driver who had seen the incident and come to “assist” him.

Despite being transferred to hospital, Abd Al-Fatah later succumbed to his wounds, leaving behind his wife and young daughter.

B’Tselem, however, found evidence that the Israeli army subsequently covered up this series of events:

Minutes after the two settlers opened fire, Israeli military jeeps arrived on the scene. […] Eight soldiers [then] went into two nearby shops to check their security cameras. They dismantled a DVR [recording equipment] in one of the shops and left. About twenty minutes later, the soldiers returned to the shop, reinstalled the DVR and watched the footage. Two soldiers filmed the screen with their mobile phones. They then erased the footage from the DVR and left.

The NGO concluded: “Contrary to media reports, [the] shooting of ‘Abd al-Fatah was unjustified […] The Israeli security forces that arrived on the scene ignored these facts. They did nothing to arrest the two settlers, promptly drove the Palestinians away from the scene, and then addressed the urgent task of eliminating any footage of the incident, to ensure that the truth never comes to light and the shooters would not face any charges or be held accountable in any way.”