Ann Arbor (Informed Comment) – Outside observers often have the incorrect impression that the Qur’an, the holy book of Muslims, is bleak, or harsh, or even violent. Philip Jenkins has found that the Bible is far more violent than the Qur’an, and the violence in the latter is about self-defense from attacking militant pagans.

Jenkins is right: the Qur’an has relatively little violence in it, and very little law. I discuss the themes of peace in the Qur’an in my new book:

The Qur’an is mostly like the Psalms, its passages waxing lyrical about the beauty of God and human spirituality.

“God is the light of the heavens and earth. The metaphor for his light is a niche cradling a lamp. The lamp is enclosed by cased glass, and the glass is like an opalescent star. In it burns olive oil from a blessed tree neither of the east nor of the west, the oil of which almost blazes forth even though no flame has touched it. It is light upon light. God guides to his light whomever he wills, and crafts parables for the people, for God knows all things.”

Fourteen centuries of mystics, and not a few Christian and Hindu authors, have been inspired by the beauty of this passage, with its extended metaphor for spirituality and enlightenment. It is much more typical of the Qur’an than the handful of verses commanding the believers to defend the poor, the weak, the women and children, from the bloodthirsty pagan cavalrymen of Mecca.

By the way, I used the technical term “cased glass” for a reason. In ancient lamp-making it is “Glass consisting of a layer of clear glass fused to a layer of opal or other tinted glass. Cased glass transmits light more efficiently than opal, with more luster and better diffusion. Cased glass can be blown or molded.” (See also Tassos Antonaras, “Glass lamps of the Roman and Early Christian periods. Evidence from the Thessaloniki area”). I suspect that when the Qur’an says that that the glass of the lamp is like a brilliant (durri) star, it is referring to this opal fusing, which produces the effect of iridescence.

This is probably what such a lamp, minus the base, looked like in the Eastern Roman Empire: 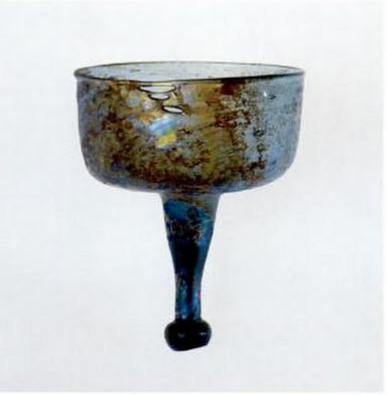 That the Qur’an focuses far more on positive affect and well-being than on (defensive) violence can be demonstrated by some statistics.

There are 14,870 unrepeated, distinct words in the Qur’an. So here is a census of some of the prominent positive terms in the book:

262 – Times words from the root for forgiveness (ghfr) occur

108 – Times words from the root for benevolence (ahsana) occur

49 – Times words from the root for light (nwr) occur

13 – Times words from the root for kindness (r’f) occur

So coming back to the subject we began with:

170 – Times words from the root for committing violence (qtl) occur

But note that these 170 instances include verses prohibiting murder, urging that families whose son was killed take blood money instead of pursuing a vendetta, or forbiding any aggressive fighting beyond self-defense.

This is just figuring on the back of a napkin compared to Jenkins’s study, but as someone who has read the Qur’an regularly for 40 years, I can tell you that it will hold up.

(1) Some of these instances just say that “God does not like” something, whereas others actually speak of love.