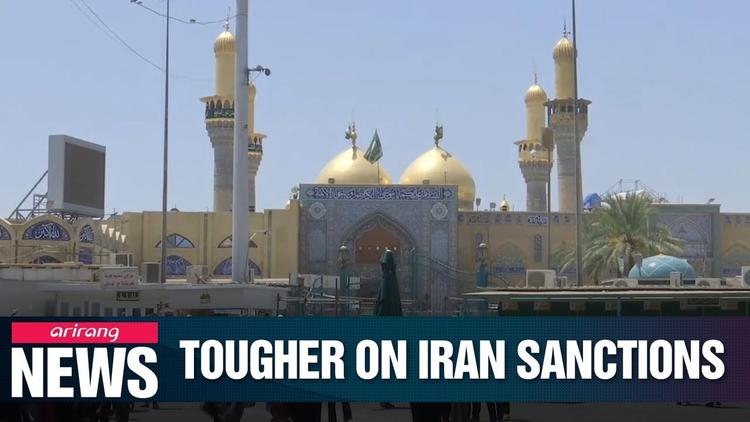 (RFE/RL) – The United States has pledged to cut Iran’s oil exports to “zero,” denying Tehran a key source of revenue through tough sanctions and the threat of stiff penalties to potential buyers.

But economists say that while the U.S. measures will hit Iranian oil sales, which account for 70 percent of the country’s revenues, they will not completely halt them.

Iran can skirt U.S. sanctions and still sell oil through different avenues, say analysts, who predict that Tehran’s petroleum exports will not fall more than 30 percent from current levels.

Ahead of May 8, the first anniversary of U.S. President Donald Trump’s decision to withdraw from a controversial 2015 nuclear deal with Tehran, an Iranian official said the country would circumvent renewed sanctions by selling oil on the “gray market.”

Under the 2015 deal between Iran and world powers, Tehran was to curb its nuclear program in exchange for relief from international sanctions. The United States reimposed crippling economic sanctions on Tehran months after pulling out of the agreement, dealing a major blow to Iran’s crisis-hit economy. Last month, Washington ended waivers for major importers of Iranian oil.

Even if Iran can sidestep U.S. sanctions, it is unclear if buyers want to risk huge penalties to buy its oil, say analysts.

One tactic previously employed by Iran to bypass U.S. sanctions and sell its oil is through the use of “ghost” tankers.

Iran has hidden the destination of its oil sales by strategically switching off oil tankers’ AIS signal, an automatic tracking system. This has made it difficult to pinpoint the origin, route, and the date a tanker is loaded and unloaded.

Other tactics used by Iran at sea include ship-to-ship oil transfers and discharging and loading oil at remote ports. Tehran has also been known to reflag its tankers and use documents from other countries to mask their ships’ origins.

Iran was exporting around 2.5 million barrels of oil a day in April 2018, the month before Trump withdrew the United States from the nuclear deal. Since U.S. sanctions on Iran’s oil industry were reinstated in November, Iranian oil exports have decreased by more than half to around 1.1 million barrels per day (bpd).

Scott Lucas, an Iran expert at Birmingham University in Britain and the editor of the EA World View website, says some industry experts estimate that Iran is exporting up to 400,000 barrels of oil per day above officially acknowledged levels through methods such as turning off transponders on tankers. Lucas says industry experts predict that U.S. sanctions will further decrease Iran’s current official oil exports by up to 20 or 30 percent.

“The U.S. aim is not an embargo with action to intercept and stop tankers,” says Lucas. “Instead, Washington will aim at the financial networks supporting transactions.”

Scott adds that these “off-the-grid movements” may give some relief from tightening U.S. sanctions, but they increase the risk of Tehran being seen as the “culprit rather than the victim in this showdown.”

Iran has the support of the other signatories of the nuclear deal — Russia, China, France, Britain, and Germany — which have criticized Washington for unilaterally pulling out of the deal and reimposing sanctions, despite multiple reports by the International Atomic Energy Agency (IAEA) that Tehran was complying with the agreement.

U.S. sanctions prevent Iran — and those who want to do business with them — from dealing in U.S. dollars, the global reserve currency, and from using SWIFT, the U.S.-dominated global-transaction network. Oil is also priced and traded in U.S. dollars.

Iranian Foreign Minister Mohammad Javad Zarif said Iran plans to get around U.S. sanctions by selling oil in other currencies.

“You can use your own currency,” he told reporters in New York in September, saying countries were making deals with Tehran to use their own currencies in bilateral trade. “Sell stuff in your own currency, buy stuff in the other country’s currency, and at the end of a specific period, balance it out in a non-dollar currency. It’s quite possible. And may even be profitable.”

Iran has used this tactic before when it was under sanctions, dealing in euros and the Chinese yuan.

But Scott says deals in currencies like the yuan or the Indian rupee are “not attractive because the currencies are nonconvertible or are limited in the international financial system.”

Russia has said it would buy at least 100,000 barrels a day of Iranian oil. Moscow has offered to pay for the oil with Russian machinery and food, according to Russia’s Oil Ministry. Moscow has also pledged to invest in the Iranian oil sector as Western companies draw back.

In 2017, Russia implemented an oil-for-goods program with cash-strapped Iran, with Moscow buying Iranian oil in exchange for Russian goods, including oil pumps and pipes, gas-drilling equipment, metal and wood products, leather, and wheat. The two countries have been working on oil-for-goods deals worth up to $20 billion.

Many buyers of Iranian oil are vulnerable to U.S. sanctions because they use the U.S. banking system. But Russia and China are less vulnerable because their economies and financial systems are less connected to the United States than Western countries.

Iran has previously had barter deals with China and India. At the time, Iranian critics of government policies maintained that bartering partners were selling useless merchandise to Iran.

“Whenever there are excessive regulations or sanctions, black markets spontaneously emerge as a way out from under the regulations and sanctions,” says Steve Hanke, an economist at Johns Hopkins University in Baltimore. “So, for a sanctioned seller, there is a way out. But it comes at a price: lower profits from sales.”

Iran also has the option of selling oil through the Iran Energy Exchange (IRENEX), a rial-based, domestic oil exchange.

Selling oil is in the hands of the state, but to skirt U.S. sanctions the government last year began to sell to private buyers through IRENEX.

Naysan Rafati, an Iran analyst at the International Crisis Group, says the exchange keeps the details of the buyers private because they might be targeted by U.S. penalties.

But the domestic energy exchange has not proven to be successful. Fars news agency reported on April 30 that only 70,000 barrels were sold at $60 a barrel, lower than the price on world markets.

Naysan says that, fundamentally, Iran must grapple with the question of demand.

“We will have to see what appetite, if any, those companies doing the buying have for possible penalties by a U.S. administration that’s clearly made this a key policy objective,” he says.