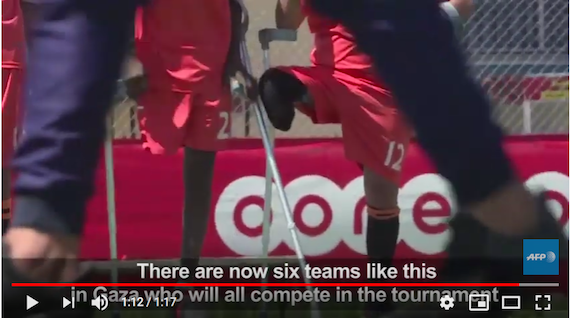 Ann Arbor (Informed Comment) – Thousands of innocent Gaza Palestinian protesters wounded by live fire by Israeli snipers are in danger of losing limbs if the decrepit Gaza hospital system does not receive $20 million, according to Jamie McGoldrick, United Nations Humanitarian Coordinator for the occupied Palestinian territory.

Since the Great March of Return protests began in spring of 2018, some 31,691 Palestinians have been injured by the Israeli army. Almost none of those wounded had actually come up to the border fence with Israel or gotten close enough to Israeli soldiers to endanger them. We are therefore talking about 31,0000 war crimes, since it is not permitted in international law for occupying troops to simply shoot down unarmed protesters.

Most of those injured were hurt by military-grade tear gas, about which victims report that “Acute symptoms included loss of consciousness, breathing difficulties, rashes, and severe pain, all of which lasted many hours beyond the time they were directly exposed to the gas.” Repeated exposure raises anxieties about chronic headaches and miscarriages. Some are injured by being hit by the teargas cannisters, which can cause serious injury and even death.

About 7,000 Palestinian protesters in Gaza have been sniped out with scopes by professional Israeli snipers, and hit with live fire strategically targeting their legs.

1,700 of those 7,000 are in immediate danger of bone infections and other complications and cannot hope to get good medical treatment in the Gaza Strip, where a decade of Israeli blockade has left the medical infrastructure woefully underfunded, and where Israeli airstrikes have sometimes hit hospitals.

The only way local physicians have of saving the lives of these 1,700 sniping victims is to amputate a limb, even though amputation would never be called for if the victims were hospitalized in Israel proper or in Europe. Protesting being made homeless by Israeli policy, and taking a bullet in the process, is threatening them with permanent loss of a limb.

Physicians have already been forced to carry out 120 amputations since the protests began last year. Twenty of these amputees have been children. Again, these children did not present any danger to Israeli troops and each time one was shot, a crime was committed by an Israeli soldier, who had the child in his scope and decided where exactly to put a bullet into her or his body.

There is very high unemployment in Gaza, in part because of the Israeli blockade, and especially among youth. The average office worker makes $400 a week. Most Palestinian families in Gaza are $4,000 in debt. Most families cannot hope to be able to afford quality medical care.

The United Nations had called for $350 million in aid for Gaza, but is getting only about 14% of that from international pledges.

Switzerland: UN appeal for millions of dollars to save limbs of injured Gazans