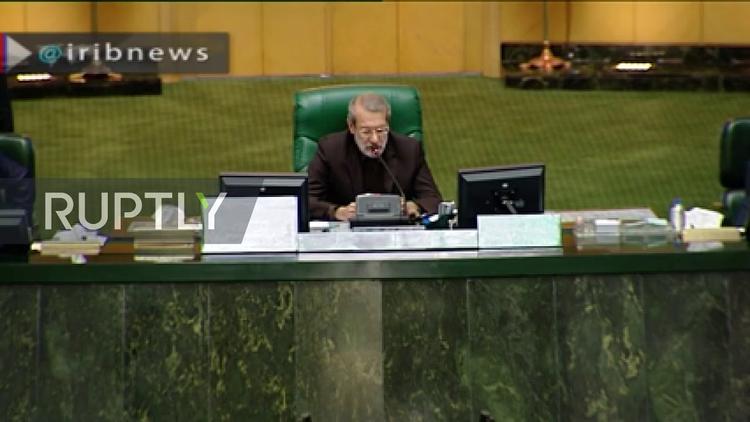 Ann Arbor (Informed Comment) – Iran’s speaker of parliament, Ali Larijani, said Monday that he believed that the United States might have staged the attack on two oil tankers in the Gulf of Oman last week.

Larijani said that such an attempt to frame Iran would be consistent with current US policy, which is to prevent Iran from selling its petroleum abroad.

Larijani went on to say that the US had a history of mounting such pretexts for war. But he seems to have gotten mixed up between the Gulf of Tonkin “incident” that justified the Vietnam War and Pearl Harbor, which was not staged by the US. Or maybe Larijani is trying to curry favor with Japan’s right wing prime minister, ABE Shinzo (Japanese put their family names first). Or maybe he isn’t good at history. This sort of conspiracy theory projected back to WW II undermines his initial accusation.

What is true is that the United States is guilty of the same sort of thing, carried out by the Office of Foreign Asset Control of the US Treasury Department, as Iran is accused of.

Both actions, the tanker attack and the US unilateral severe sanctions, stop someone from engaging in lawful commerce.

The United States has no grounds for its financial blockade on Iranian oil. The US in 2015 signed the Joint Comprehensive Plan of Action with Iran, guaranteeing an end of economic sanctions in return for Iran mothballing 80% of its nuclear enrichment program.

Iran has been in compliance according to the UN inspectors. But the Trump administration has not. Trump breached the agreement and went around the world forcing other countries not to buy Iranian petroleum, even though Iran was in compliance with the JCPOA.

The State Department on Monday actually had the nerve to call on Iran to observe the terms of the nuclear deal, even though Trump screwed Tehran over by ratcheting up sanctions and by cowing European firms into avoiding Iran investments and trade!

Iran should keep its part of the bargain, why?

I don’t really see a big difference between setting a mine for an oil tanker and deploying OFAC against oil exports. You could say the latter is non-violent, but it isn’t really. Severe financial sanctions are inherently violent. They are interfering with Iranians having the money to buy needed medicine. They are interfering with Iran modernizing its aged commercial airliner fleet.

For instance, on Jan. 9, 2011, an Iran Air Flight, 277, with Boeing 727-286Adv equipment, crashed near Orumieh, killing 79 passengers and injuring 24. The forensics team specified old equipment as one of the reasons for the crash.

United States sanctions are killing people who are pushed down out of the middle class and cannot any longer afford medicine, but they are also just executing Iranian airline passengers right out of the sky because the Treasury Department threatens to fine anyone selling anything to Iran (there was another crash in February).

So I condemn the tanker bombings, whoever did them, as a form of terrorism. But I also condemn what Washington is pleased to call “severe sanctions” as a form of state terror.

I’d feel differently if the sanctions were imposed by the UN Security Council; but UNSC sanctions lapsed on the signing of the nuclear deal in 2015. The sanctions are not even imposed by Congress, to which the Constitution gives the power of regulating interstate commerce. Trump just woke up one morning and breached the JCPOA treaty and then had his goons go around strong-arming countries like India and China. It is arbitrary and lawless, and was always guaranteed to cause a great deal of trouble.

Sheldon Adelson, the filthy rich casino mogul who gathered up billions by taking advantage of poor people (in most casino games the House takes 20% to 30%) is said to have pushed Trump to install anti-Iran warmongers such as John Bolton in high office. The point is obviously to push the United States into a war with Iran for the sake of the colonization project of the far, far-right Likud government in Israel. Iran is one of the only countries remaining to even so much as politely object to the slow ethnic cleansing of the Occupied Palestinians, and Adelson and his pet, Binyamin Netanyahu, want to find a big goon to break Iran’s legs. They have fixed on the erratic and gullible Trump.

Trump has already put up the annual US budget deficit to $1 trillion a year with his 2018 tax scam for his super-wealthy friends. A war with Iran would double it to $2 trillion a year. Eventually the dollar will be worthless and you could get a reverse snowball effect of people dumping dollar holdings.

The Neocons are already out prowling the op-ed pages shouting “cakewalk” about an American war with Iran. It won’t be a cakewalk. It will be an enormous guerrilla war that will make ISIL look like a minor hiccough.

So Larijani’s conspiracy theory is almost certainly wrong. But the way Trump has behaved will make a lot of people, including US allies, open to the Speaker’s argument. After all, Trump mostly offers ahistorical conspiracy theories, too.

And that is a sad commentary.

Ruptly: “Iran: US likely to be behind ‘suspicious’ Gulf of Oman incident – Larijani”