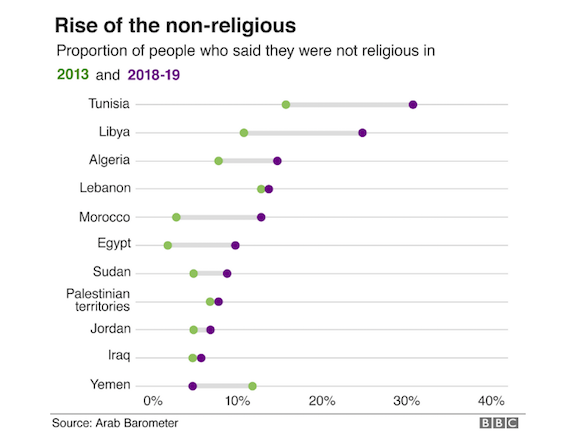 Ann Arbor (Informed Comment) – The Arab Barometer in partnership with the BBC has interviewed a weighted sample of 25,000 people in the Arab world. One of the survey’s findings is the rapid decline in self-reported religiousness.

About 30% of Tunisians say they are “not religious” in 2019, nearly doubling since 2013. The youth are more likely to report such disillusionment than adults, so the proportion among them must be enormous. Tunisia is a country of 11.4 million, and the nominal per capita GDP is about $3400, placing it 120th or so in the world (that is, way down there). If you count what they can buy locally with their money, Tunisians’ per capital GDP rises to over $11,000 per year. That is 100th in the world and I was shocked to discover that it is less than Egypt.

In contrast, only 15% of Americans report that they have no religion, half the Tunisian statistic.

Tunisians have been disillusioned with political Islam, in the form of the Nahda or Renaissance Party, after their 2010-11 youth revolution overthrew dictator Zine el-Abidine Ben Ali. Nahda ruled for two years early after the revolution, but was defeated at the polls in 2014.

For young people, one of the reasons to flee religion is the regional outbreak of extremist movements such as ISIL, who are present and fighting in Libya, Tunisia’s neighbor.

Libya has also seen the proportion identifying themselves as religious “nones” (that is what the sociologists call them) rise from 10 percent to over 25 percent since 2013. Libya also had a revolution in 2011 but since 2014 has fallen into civil strife (though not nearly as badly as Yemen or Syria) and has seen extremist groups such as ISIL take and hold territory. Again, youth may be blaming religion of the country’s strife and religious extremism in particular.

Although Libya has tended to be a fairly religious society on the surface, it should be remembered that it has US-level urbanization rates and that the long years of rule by the erratic “socialist” Moammar Gaddafi weakened religious institutions. Libya’s population is small, at 6.3 million, and its economic statistics are impossible to know because of the fog of war (though Libyans are certainly much less well off today, because the fighting has interfered with pumping oil).

Algeria and Morocco have also seen substantial movement toward having a significant proportion of religious “nones,” though the increase over five years is more impressive than the proportion itself (roughly 12-15 percent).

Algeria suffered a horrible civil war in the 1990s between the oil elite and its generals and lower middle class urban and rural fundamentalists. The memory of that struggle may be affecting the numbers.

The biggest moves are in North Africa and especially in countries that had recent revolutions or have had significant social activism (Algeria and Morocco) in recent years.

The barometer’s findings suggest that those countries that saw permanent political change as a result of revolutionary youth movements in the past 8 years are also witnessing a secular turn in society. It may just be that political Islam has tended to be authoritarian and reactionary, and that just isn’t what this generation’s North African Arab youth are going for.

But it is also clear that there is a similar rise in youth who wish to emigrate because of economic and political despair, and these findings could reveal a disillusionment with their societies and their values across the board.