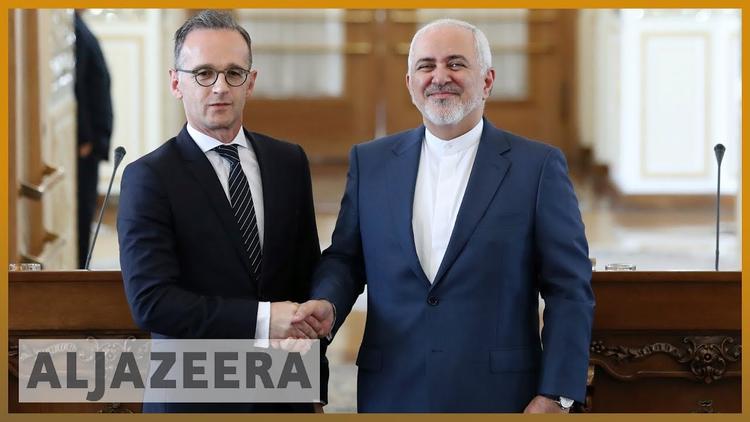 Ann Arbor (Informed Comment) – Iranians are increasingly impatient with Europe’s lack of concrete steps to protect Iran from Trump’s severe sanctions, and the frustration made for a tense visit Tuesday by German foreign minister Heiko Maas to Tehran.

Iranian president Hassan Rouhani told him to his face that Europe had reacted in the politically correct manner in rejecting Trump’s breach of the 2015 nuclear deal and his unilateral sanctions, but that Europe had still done nothing practical about it. He called Trump’s sanctions a form of “economic terrorism.”

Foreign minister Mohammad Javad Zarif likewise said that Trump was waging economic war on Iran and nothing could be accomplished until that ends.

Rouhani and Zarif are correct that Trump’s sanctions go beyond being merely sanctions but constitute a form of blockade (a serious step that constitutes a legitimate basis for going to war where the blockade is naval or physical). The US is attempting to prevent Iran from selling any petroleum to anyone in the world. This initiative is a purely American one, with no support to speak of in the rest of the world (with the exceptions of Israel, Saudi Arabia and the United Arab Emirates). The financial blockade has not been endorsed by the United Nations Security Council. Indeed, it contravenes the 2015 nuclear deal, to which the UNSC is devoted. It isn’t even clear that the policy could gain a majority vote in the US Congress. It is just Trump.

Maas pledged that financial instruments allowing Europe and Iran to sidestep the American blockade would be ready soon.

Europe is hobbled from combating the Trump sanctions because German firms invest in and trade with the US at a high level, and if any of those firms also exported to Iran, it would be fined billions and excluded from the US market, worth $20 trillion a year. That is roughly 23 percent of the global GDP. And, the US is much easier to invest in and to repatriate money from than some other lucrative markets. No one is going to trade access to the US for access to Iran’s $439 billion a year economy.

The US claims authority over the international banking system and exchanges such as SWIFT in part because the US dollar is the world’s reserve currency. So Treasury claims the right to fine people for using American dollars to trade with Iran, or for using SWIFT for money transfers with Iran.

The only European firms that might not care about US sanctions are small and do little or no trade with the United States. They might like to trade with Iran, but Iranians only need so many European toasters.

Germany and France have set up an Instex currency exchange, attempting to insulate it from Treasury sanctions. But it is rudimentary and only capitalized at $1 billion, and in any case it has not yet come online. The failure to make initiatives like Instex a bigger and more successful effort in defying Trump is what has ticked off Iranians at the major European powers.

Likewise, European governments have been pusillanimous in defying Trump’s priorities. The nuclear deal did not address ballistic missile tests, so Iran is not violating the deal when it pursues that capability. Yet whenever a Trump official comes to Europe, the locals all just fall in line condemning Iran for missile tests, which looks an awful lot to Tehran like a capitulation to Trump’s breach of the deal.

If Maas really wants to save the 2015 nuclear deal, he has to find a way to do more than pay lip service to it.