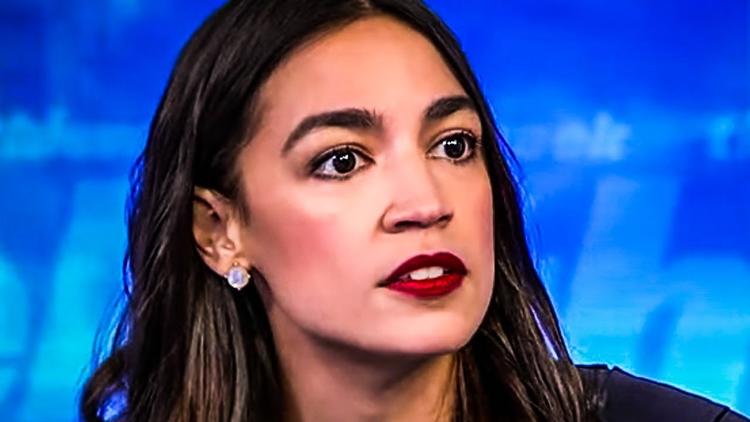 Ann Arbor (Informed Comment) – Alexandria Ocasio-Cortez has been under fire for an Instagram message she sent out in which she characterized the holding facilities for refugees and other undocumented entrants into the US run by ICE and by private companies (for which it is a $2 billion a year industry) as “concentration camps.”

Human rights groups are speaking of a systematic violation of basic human rights of these immigrants. Note that it is perfectly legal for people to seek refugee status in the United States, and that the court system determines if they will be awarded that status. Trump is now trying to intimidate INS agents into not forwarding cases to the judges. It is illegal for people to simply migrate without documentation into the United States, but the US has been dealing successfully with that phenomenon for years, deporting some 400,000 people a year. In the past decade, more Mexicans have left the US than have come in, and Trump’s anxiety is one more appropriate to the 1980s and 1990s. A majority of Americans favor immigration and 70% say being welcoming of people of other cultures is key to their idea of America.

Some immigrant children are actually being sent to an old internment center that had been used to hold Japanese-Americans during WW II (those were also concentration camps).

This crisis is Trump-made. Nothing in the law requires family separation, but he designated persons fleeing to the US seeking asylum as criminals, so they have to be arrested and adults and children can’t be held in the same prisons. Likewise, the old practice was to let relatives just pick up related children, but now ICE puts the relatives (many of them citizens or lawful residents) under such a spotlight, looking for people to deport, that the relatives are now too afraid to come get the children.

Among the most vocal critics of AOC’s diction is Liz Cheney. The Cheneys may still own shares in private prison companies; her father Dick was indicted in 2008 for blocking investigations into prisoner mistreatment in those concentration camps. For-profit prisons should be illegal, and government officials certainly shouldn’t be allowed to own them! Cheney’s line is that it is sacrilegious to apply the term “concentration camp” to these facilities because it diminishes the concentration camps into which Jews were put by the Nazis in preparation for the Holocaust. AOC and her critics fired back that the Nazi concentration camps were a prelude to death camps, an entirely different phenomenon.

So being a historian I looked into this “concentration camp” term.

The British authorities imprisoned Afrikaners in concentration camps during the Boer War. A clergyman from South Africa came to Harvard in 1902 to assert that out of every 1000 children held in British concentration camps, 350 were dying.

During WW I, Austria set up concentration camps for prisoners of war and suspicious aliens:

But then so did Britain. 400 German infantrymen were put in what was called a “concentration camp” at Lancashire during the war:

I was surprised to find, though, that in the early 20th century the phrase was not necessarily pejorative.

In 1917 when Woodrow Wilson took the US into World War I, he first had to establish a standing national army (something that was most unwise on his part and against which the Found Fathers had warned). So here’s the headline from Proquest’s Historical Newspapers search:

So as the phrase was used in 1917, it was just a camp where you concentrated people for some purpose. We would now call those facilities military bases and since Woodrow Wilson we have taken it into our heads to put about 800 of them around the world for the use of our standing military that consumes the annual GDP of a whole country such as Switzerland or Saudi Arabia (and for which we have decided to pay by deficit financing rather than by taxing the people with the money whom the military is protecting).

On the other hand, the British concentration camps for Afrikaners were much more sinister and caused a black eye for the British Empire.

Already in 1919, we begin to see the term applied to places where Jews were rounded up, as in post-war Hungary. After the collapse of the Austro-Hungarian Empire, Hungary experienced two revolutions, both soon collapsing. Paramilitaries arose. In the White Terror, some 3,000 people were assassinated, mostly workers and peasants, about half of them leftist Jews.

Then we get this item from 1919, which is chilling in how it foreshadows the rise of Nazi genocidal policies. 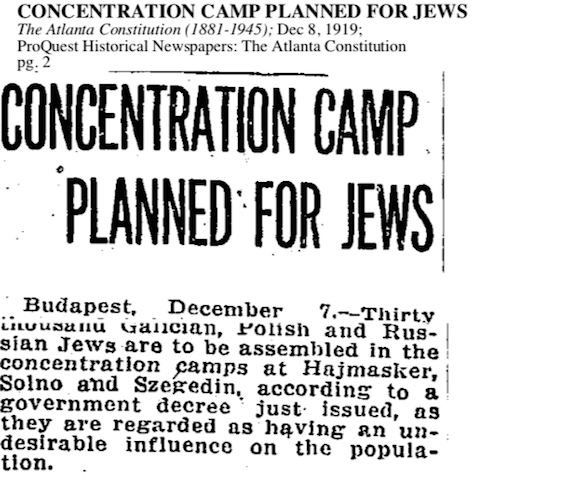 (The Hungarian far right has a long and sanguinary history; it is now ensconced in power again and has sent to the United States the agent provocateur Sebastian Gorka, whose wife, a Breitbart denizen, just took over as press secretary of US customs.)

Se we may conclude that historically speaking a concentration camp has been a camp where people were concentrated for some purpose. It could mean a military base, or a POW holding facility, or a camp where civilians were immured during war or revolution or just because they were felt to be undesirables.

And the latter is pretty much Trump administration policy toward refugees in the Southwest today.

So yes, AOC is right to call it what it is. And the anxiety on the American Nazi Lite side of the political spectrum about it being called what it is is just a form of propaganda and denialism.

Farron Cousins, Ring of Fire: “AOC Is Correct About What’s Happening Along Our Southern Border”