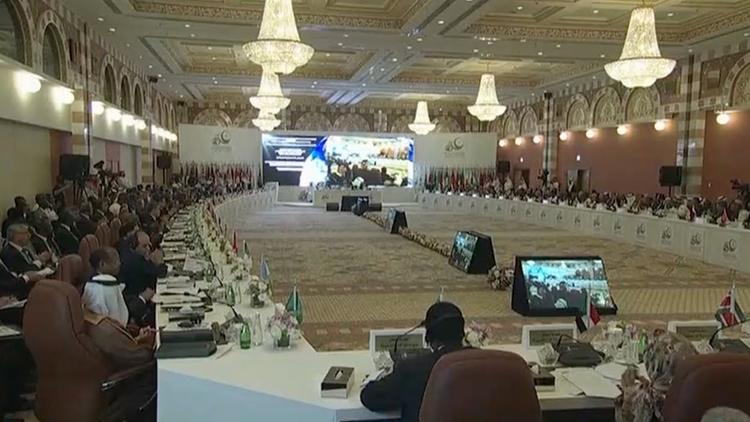 Saudi Arabia hosted three summits side-by-side this week. Saudi King Salman Bin Abdul Aziz Al-Saud hosted the 14th summit of the Organisation of Islamic Cooperation (OIC) on Friday. Saudi Arabia exploited the date and place of the OIC meeting to further its agenda, by calling for emergency meetings with the Arab League and the Gulf Cooperation Council (GCC).

Mecca is vital for other reasons during this time of the year; thousands of Muslims from across the globe come to the city during the month of Ramadan. It is challenging to get accommodation, as multitudes of Muslim faithful gather to dedicate time to worship. Saudi Arabia strategically chose this period to entrench its position and indirectly communicate its importance to leaders attending these summits i.e. Saudi Arabia ” is a home for all” and it must, therefore, be protected at all costs.

Unsurprisingly, Iran dominated the agenda of the Arab League and GCC meetings. Saudi Arabia, the US and UAE accuse Iran of threatening regional stability. The accusation follows the attack of Saudi tankers in Furaijah, off the coast of UAE. US National Security Adviser John Bolton supported the accusations, telling the media that “the naval mines almost certainly [came] from Iran”. Iran, meanwhile, has refuted these claims and called such accusations ridiculous.

There are several urgent challenges in the region at the moment; the least of them is Iran. The continuing suffering of the people in Syria and the humanitarian strife in that country tops the list. According to Reuters, a Russian-backed Syrian government offensive in the rebel-held northwest – the most severe escalation of the war between President Bashar Al-Assad and his enemies since last summer – has uprooted around 250,000 people in the territory, the last significant rebel stronghold.

The Syrian crisis has had catastrophic global socio-political consequences. The mass movement of refugees from Syria to Europe has negatively impacted politics, particularly in Europe, where it has given rise to anti-immigration politics and right-wing political insurgency.

Secondly, the ongoing war in Libya to capture the capital Tripoli, led by “warlord” Khalifa Haftar, has brought misery to many parts of the country. Saudi Arabia and the UAE are openly supporting Haftar.

Moreover, the continued political stalemate and protests in Sudan have led to dozens of deaths. The military top brass refuses to hand over power to civilian rule. Recently, the leader of the Sudanese Transitional Military Council, Abdel Fattah Abdel Rahman Burhan, visited the UAE, Saudi Arabia and Egypt, a move seen by many in Sudan as having boosted the military’s resolve to hang on to power.

Further, “Saudi Arabia and the United Arab Emirates said on Sunday they had agreed to send Sudan $3 billion worth of aid, throwing a lifeline to the country’s new military leaders after protests led to the ousting of president Omar al-Bashir”.

Moreover, the pressing crisis in Yemen continues unabated. Saudi Arabia is leading a coalition waging war in Yemen since 2015. The UN says at least 7,025 have been killed and 11,140 injured in the fighting since 2015, with 65 per cent of the deaths attributed to Saudi-led coalition air strikes.

These Mecca meetings have, as usual, continued to pay only lip service to these urgent matters in the region, instead upping the ante on Iran. Saudi Arabia used these meetings to attempt to achieve a regional and “Muslim consensus on Iran”. The final communique of the GCC and the Arab League summits supported the right of Saudi Arabia and the UAE to defend their interests in the face of the attacks.

So what does this mean for the future of the region? First, Saudi Crown Prince Mohammad Bin Salman earlier this year made an undertaking to purchase billions of dollars’ worth of weapons from the US. In March last year, “MBS looked very uncomfortable as [US President Donald] Trump listed the amounts of weapons the US has sold to the Saudis, ‘$880 million … $645 million … $6 billion … that is for frigates”.

The endorsement of “the Iran threat” expands responsibility to all countries in the Gulf, including Qatar. Currently, Saudi Arabia, the UAE and Jordan will pay $8 billion for US-made bombs, rockets, missiles and electronic warfare equipment, as well as the US personnel who can operate it. Secondly, after the US Congress blocked the sale of these weapons systems and services, ostensibly because they have killed civilians in Yemen, President Trump has to find another way out.

President Trump overrode the resolution by using “a legal loophole in the Arms Control Exports Act, which regulates transfers of deadly weapons to foreign countries. Additionally, he got both the Arab League and the GCC to pressure congress. The communique by the Arab League and GCC, which puts emphasis on “Saudi Arabia and the UAE’s right to defend their interests in the face of the attacks”, will only bolster Trump’s position.

Finally, if the sale does go through and the war finally ensues, Saudi Arabia and the UAE will have control of the Strait of Hormuz – located between Iran and the UAE – which has been the key bone of contention at the moment. This could be detrimental for other Gulf countries, particularly Qatar, which relies on the route to conduct most of its business. Furthermore, Israel also stands to benefit. If all goes according to plan for Trump and Bin Salman, Israel would have finally managed to transfer its “Iranian problem” to Arab countries.

Thembisa Fakude is Head of Research Relations at Al Jazeera Centre for Studies.