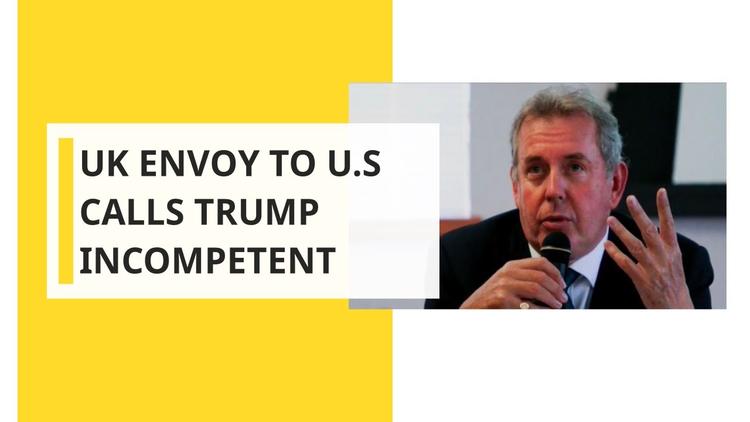 Ann Arbor (Informed Comment) – Isabel Oakeshott at the Mail on Sunday has gotten hold of troves of UK diplomatic cables back to Whitehall from Washington, D.C., sent by veteran diplomat Sir Kim Darroch, which are scathing on Donald Trump. What is in the cables is interesting, but it should be signalled that the Mail on Sunday was once embroiled in a phone hacking scandal and is a right wing tabloid, sister of the Daily Mail, sort of a more polished National Enquirer for the UK. While there doesn’t seem to be any doubt that the cables are genuine, it strikes me as possible that Darroch has been outed by a UK pro-Brexit, pro-Trump rival who dislikes his pro-Europe views. None of this is meant to reflect on the author of the piece– good reporters work where they can find work, and the cables are newsworthy.

“‘radiating insecurity’, filling his speeches with ‘false claims and invented statistics’ and achieving ‘almost nothing’ in terms of domestic policy.”

Darroch wrote at one point,

On foreign policy, Darroch had things to say regarding Trump’s approach to Iran:

A June 22 memo talks about US Iran policy as

“incoherent, chaotic . . Its unlikely that US policy on Iran is going to become more coherent any time soon. This is a divided Administration.”

He doubted Trump’s assertion that he backed off airstrikes on Iran because of concerns about casualties and lack of proportionality:

“It’s more likely that he was never fully on board and that he was worried about how this apparent reversal of his 2016 campaign promises would look come 2020′ – at the next Presidential election.”

Darroch was referring to Trump’s complaints about the Iraq War and the US wasting taxpayer money abroad on foreign conflicts, which was one of the themes on which he won the presidency.

In a 2017 cable Darroch said that reports, denied by the White House, of “vicious infighting and chaos” among Trump’s senior officials are “mostly true.”

Darroch also thinks it is entirely plausible that Trump is indebted to shadowy figures in Russia.