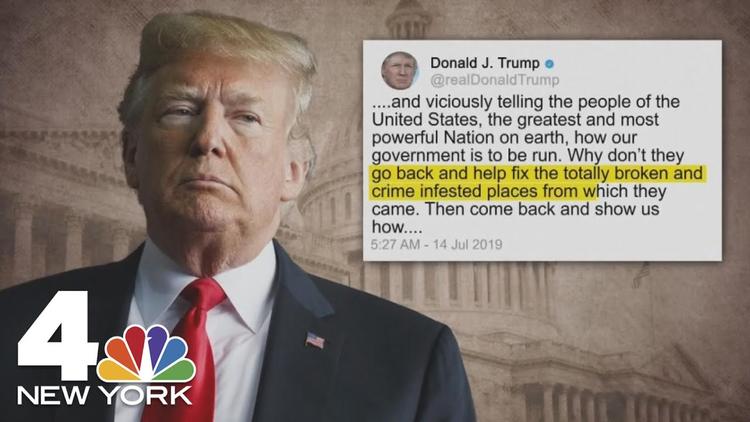 Ann Arbor (Informed Comment) – Trump is again making a spectacle of himself, quite deliberately, in attacking the four congresswomen known as “the Squad.” They champion progressive principles like the Green New Deal, describe themselves as socialists or don’t object to the term, and most useful for our neo-Nazi president, they are not white.

Trump has implied that they are not Americans (all are, though Ilhan Omar came as a refugee at age 10 and is naturalized. Trump doesn’t seem to understand that Puerto Rico is a territory of the United States and Alexandria Ocasio-Cortez is an American by birth and heritage). He has told them to “go back” to their countries of origin, which would be places like Detroit and Queens. Since Ilhan Omar is one of three Muslim-Americans serving in Congress, predictably Trump has tried to link her to al-Qaeda (she is a refugee from such movements in Somalia and since she recently danced publicly at an event for LGBTQ rights, I think we may conclude that she is not, like, a fundamentalist).

Trump’s nativism is ironic since he is second-generation himself (his mother was from Scotland) and so are his children (their mothers are from the Czech Republic and Slovenia, respectively). But he is actually playing the race card, as is common among plutocrats, in order to avoid playing the class card. But that is his real card.

In many ways, the Squad represents more Americans by far than Trump.

Some 14.1 percent of Americans are Black or mixed-race and Black. Ayanna Pressley (the first Black congresswoman from Massachusetts) and Ilhan Omar represent majority white districts in Congress but they also symbolically represent 41 million African-Americans.

As for Ocasio-Cortez, 18.1 percent of Americans are of Hispanic descent.

About 13.7% of Americans are foreign-born. That would be Rep. Omar’s constituency. They overlap with Latinos, but not as much as you might think-they include large numbers of Asians, e.g.

If you look at that kind of identity politics, the Squad constituencies are similar in size to Trump’s core of evangelicals and the upper middle class and the rich. But the parents of these women were blue collar or service workers, and that is the real point. That’s 85% of the country. That is what this is really about. If they unite workers across race, the Squad could deprive Trump of one of his constituencies. Only 14% of blue collar workers who voted for Obama switched and voted for Trump. He promised them health care and better jobs. He hasn’t delivered. The Squad is appealing to them.

Over half of Americans support or strongly support or are neutral toward the Green New Deal. Only a plurality are with Trump in hating it.

Trump voters are elderly. The Squad speaks to the under-50 crowd. A majority–51% of youth aged 10-19 –believe in socialism.

Trump’s constituency is disproportionately old white people, who are no longer a majority in the US. Trump hopes he can get the white vote (which is a majority over-all) by ragging on people of color.