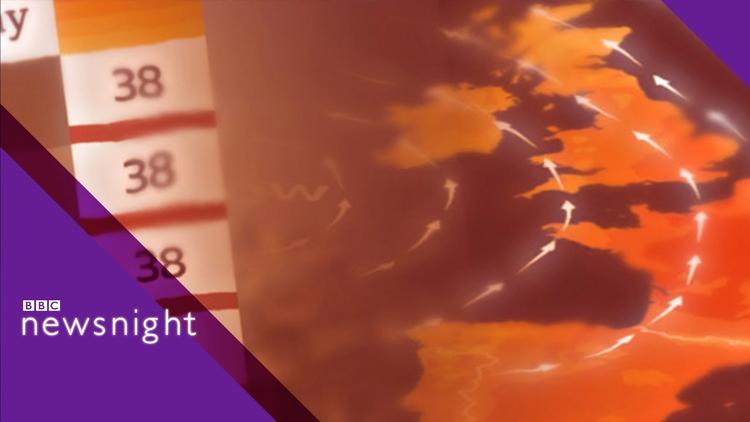 Ann Arbor (Informed Comment) – The heat wave that has swept Europe and given Paris the weather of Madras is certainly embroiled in human-caused climate change. The severity and frequency of such extreme weather is exacerbated by the 2.4 trillion metric tons of carbon dioxide human beings have spewed into the atmosphere since about 1750, by burning coal, petroleum and natural gas.

A certain amount of global heating is now already in the pipeline, since the full effects of the carbon dioxide, a powerful and dangerous heat-trapping gas, are not yet being felt. The oceans are very deep and very cold, and so will warm only over centuries, as the circulating water is exposed to the surface. But you have to think about global heating as a video game with 15 levels (each level being a degree Fahrenheit). We can immediately stop burning fossil fuels, and we can play level one or level two, which have challenges but are not that difficult. But if we go on opening the CO2 fire hydrant and putting fountains of the stuff up there, then we’ll have to play levels 3 or 4, which are really hard. If you and your friends are playing, some of them will be kicked out of the game, their avatars flashing “dead,” only it won’t be their avatars, it will really be them fleeing rising seas or extreme hurricanes and some of them ending up dead. And, well, if you still don’t get the message you’ll have to play levels 6 or 7, which almost nobody wins without incurring severe drawbacks. And if you decide you really, really want to play level 15, then you’re talking billions displaced and hundreds of millions dead.

So here are the top 5 things Europe is doing (it is the US and lots of other places, as well, not just Europe) that are ka-RA-zy in the light of what we now know.

1. Poland, the Czech Republic and even Germany are actually still planning to build new coal plants. Coal when burned emits twice as much CO2 as natural gas, and a new coal plant is more expensive than a solar or wind installation in most places. New coal plants. Europe, are you crazy?

3. No European countries are meeting their Paris climate goals. Even relatively carbon-free Sweden is only achieving 77% of them. No wonder Paris has Madras’s weather. Europe, are you crazy.

4. Only 3% of vehicles sold in Europe outside Norway (there it is 33%) are electric. But vehicle emissions account for about a fourth of the CO2 Europe is putting into the atmosphere. Norway got its high numbers with tariff abatements for buying an EV such as a Tesla. Tax policy works. But almost nobody has a pro-EV tax policy. Europe, are you crazy?

5. Wind farms are a proven and reliable source of electricity when combined with other sources. Iowa gets over a third of its electricity from wind. But last year no new wind farms were installed in 12 European countries, in part because of “permitting problems.” Permitting problems while Europe melts? Are you crazy?