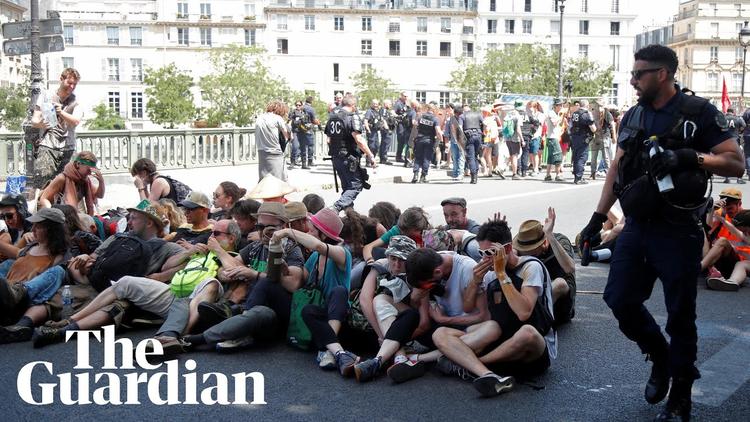 1. A European Union satellite has confirmed that June, 2019, was the hottest month on earth since scientific record-keeping began around 1850. In fact, if you take the averages of 1850-1900, June was 5.4 degrees F. warmer (3 degrees C.) Some parts of Europe were actually 10 degrees C. (18 degrees F.) warmer than normal. Germany and Spain had wildfires. The Spanish fire appears to have resulted from it being so hot that a manure field spontaneously caught on fire.

3. Antarctica has lost more ice in the past 4 years than the Arctic has lost in 34 years, according to EuroNews. The “rapid ice loss reduced Antarctic sea ice to its lowest levels in the 40-year satellite observation record,” the news service reports.

We are doing this to ourselves. Every time we fill up our gasoline automobiles and drive them and every time we burn coal to make electricity (in the US Midwest the coal mix is typically 35 to 60 percent) we are putting a dangerous heat-trapping gas, carbon dioxide, into the atmosphere. Americans are only 5% of the world’s population, but we are putting 5.5 billion metric tons of CO2 up there every year; the whole world puts out 37.1 metric tons of carbon dioxide annually. So the US does over 14% of the total, three times what we should be doing if we just went by our proportion of the global population.

Some 64% of Americans own their own homes. If a homeowner is going to be in the home for 10 years or more, they are actually losing money by not installing solar panels on the roof. If you are a homeowner and put up solar panels, plus you get an electric car, the pay off period is about 6 years, and after that you have almost free electricity plus free auto fuel if you charge during daylight hours. The panels last about 25 years, though their efficiency does decline a bit over time.

We can do our own part, but we also need to elect politicians who will address the problem systematically, with massive infrastructure. Life is going to get harder. Whether it gets a little harder or a lot harder is up to us.