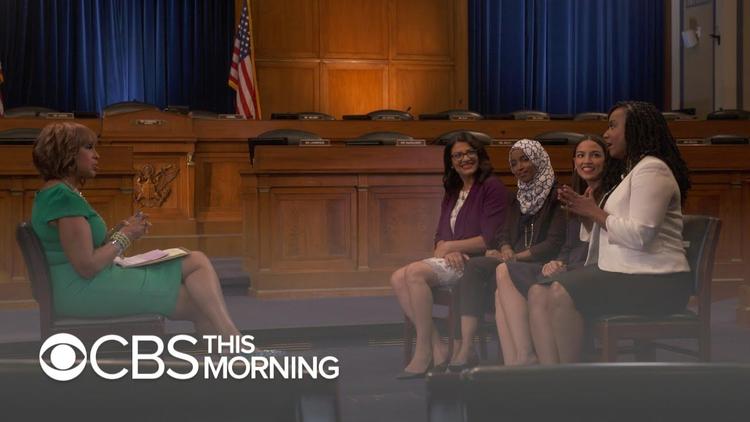 ( Otherwords.org) – You’ve heard the cliche: If you’re taking heat from “both sides,” you must be doing something right. It’s dubious advice, but it fits pretty well for “the Squad” — the progressive first-year Reps. Ayanna Pressley, Alexandria Ocasio-Cortez, Rashida Tlaib, and Ilhan Omar.

Donald Trump recently tweeted that these four women of color “originally came from countries whose governments are a complete and total catastrophe.” He accused them of “hating America” and urged them to “go back.”

Of course, all four are U.S. citizens, three were born here, and the only immigrant in the group — Omar — has lived here longer than the first lady. And, of course, that’s not the point. Trump “was not making a factual claim,” argues The Atlantic’s Adam Serwer. “He was stating his ideological belief… that only white people can truly be citizens.”

Democrats agreed — all the way up to Speaker Nancy Pelosi, who rightly called the comments “racist” and “disgusting,” and passed a resolution condemning Trump’s remarks.

Here’s the awkward part: Only days before, Pelosi was waging her own war against the Squad.
When the Squad opposed a Pelosi-backed measure funding Trump’s immigrant internment camps in exchange for paltry concessions, Pelosi ridiculed them as just “four people” living in a “Twitter world” — even though nearly two-thirds of Americans oppose the administration’s border policies.

Earlier, Pelosi had ridiculed the Green New Deal — the most sweeping climate and industrial policy ever proposed, and a key priority for Ocasio-Cortez — as a “green dream or whatever,” and staffed a weak committee to study it with compliant, fossil fuel-funded allies.

Not long after, she led an abortive charge to slander Omar as anti-Semitic for criticizing the Israeli government. (After significant pushback, Pelosi changed her tune.)

“This isn’t about America’s welfare or Omar’s qualifications,” wrote Dina Nayeri, herself a refugee, after Trump’s attack on Omar. Instead, Trump and his allies “see Omar’s potential and are desperate to clip her wings.”

Might the same be said of the Democratic leadership?

Through their passionate advocacy of popular causes, these women have gained massive social media followings — the freshman Ocasio-Cortez has over 2 million more Twitter followers than the veteran legislator Pelosi. They’re running to Pelosi’s left, and making an impact doing it.

Medicare for All, student debt cancellation, tuition-free college, and a Green New Deal — all policies members of the Squad have championed — are enormously popular with the public, though Trump and Pelosi, for different reasons, have resisted them.

The women used Trump’s attack to pivot back to those issues. Don’t “take the bait,” said Pressley. “This is a disruptive distraction from the issues of care, concern, and consequence to the American people.”

“We love all people in this country,” said Ocasio-Cortez, explaining their support for universal health care and education. Trump, Omar added by contrast, is “keeping children in cages and having human beings drinking out of toilets.”

They concluded by calling for impeachment — another move both Trump and Pelosi, again for different reasons, have resisted.

“I represent the third-poorest congressional district in this country, one that is made up of working people, who have been targeted by this administration,” said Tlaib, who comes from Detroit. “I urge House leadership… to take action to impeach this lawless president today.”

Pelosi and Trump are, of course, not the same, and Trump’s attack was far more vile. But both appear to feel threatened by the Squad’s progressive, movement-driven politics.

Unlike Trump, Pelosi could still embrace the energy these women have brought to her party. Whatever she does, I’d urge everyone else to turn off the cable news and listen to the Squad themselves. If you don’t like the way business normally gets done in Washington, you might like what you hear.