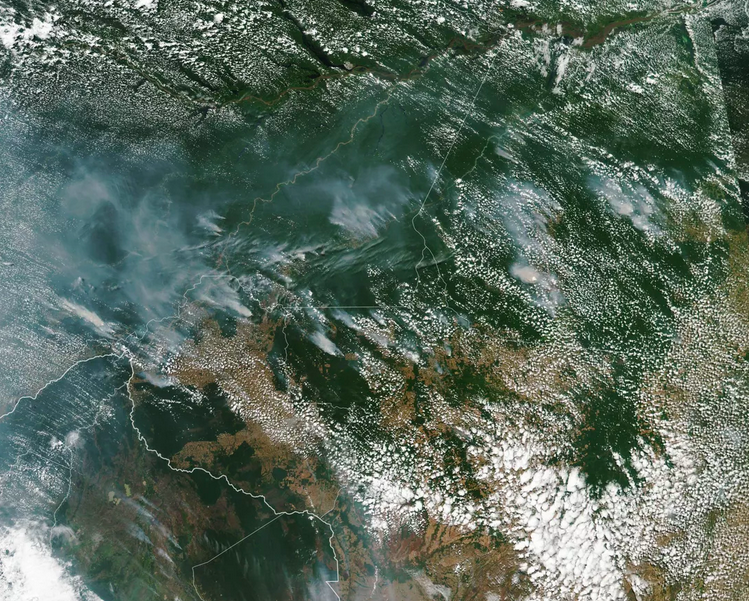 Accu-Weather quoted Brazilian meteorologist Josélia Pegorim from an O Globo interview: “The smoke didn’t come from fires in the state of Sao Paulo, but from very dense wildfires that have been happening for several days in Rondônia and Bolivia.”

That observation should be underlined: Sao Paulo was darkened by wildfires burning as many as 1800 miles away. This is like Chicago going dark because of wildfires in southern California.

The thousands of Amazon rain forest wildfires now burning over a wide swathe of South America can be seen from space. Some 74,000 fires have been tracked so far this year Brazil’s National Institute for Space Research (INPE). That is up 84% over last year.

The country’s far right wing president Jair Bolsonaro has actually called for a vast increase in deforestation of the Amazon.

Many of the fires are started by would-be cattle ranchers who want to clear the land and drive away native populations so that they can establish big ranches and sell beef.

The fires are also being caused by human beings burning coal, gas and petroleum, putting greenhouse gases into the air. The greenhouse gases cause the earth to retain the sun’s heat, more and more as we put more CO2 up there. This global heating is drying out the Amazon rain forest.

“Throughout most of its history, the Amazon rainforest was relatively fire-resistant thanks to its natural moisture and humidity. Wildfires there today are caused by a combination of droughts and human activity; the intensity and frequency of droughts in turn, have been linked with increases in regional deforestation and anthropogenic climate change. In fact, the Amazon rainforest has experienced three major droughts, considered “once-in-a-century events” in 2005, 2010, and in 2015-2016.”

Elsewhere NOAA explained that the Amazon rain forest is a “vast warehouse” for CO2. It is, in other words, a carbon sink– a formation that traps and takes in carbon dioxide (the oceans are another such sink). By destroying the rain forest, humanity is removing a major carbon sink. By burning it, we are turning the carbon sink into a producer of vast amounts of CO2, accelerating the climate emergency.

Bolsonaro’s fascism is bad for human beings in Brazil and its neighbors. But his actual encouragement of the destruction of the rain forest puts him up there with Hitler and other mass murderers, since the long term effects of what he is doing will kill millions.

I did not see this story on US cable news all day. I couldn’t tell you why, but despite its low viewership, cable news still somehow sets the national conversation. That means that there is little public interest in the conflagration in the Amazon in the US.

But it is the biggest news story today– not that Trump retweeted some fundamentalist wacko about him being the king of Israel and the second coming in the eyes of Israelis. (Israelis don’t believe in a second coming). It wasn’t his plan for indefinite detention of undocumented immigrants. It wasn’t Kashmir, or Iraq or Syria. The latter are important stories.

But if our supposed 24-hour news channels can’t tell us about the truly central story for our lives, then they are pretty useless.