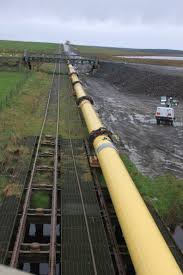 ( Otherwords.org) – Burning fossil fuels boils our planet — that much is generally well known.

But often these fuels do serious damage before they ever get to market. They spill out of pipelines, poison groundwater, or explode on trains. Even when they don’t, building new pipelines and export terminals helps companies sell more fuel — often of the dirtiest variety, like tar sands — which threatens our planet.

That’s why strong grassroots movements have cropped up against transporting tar sands oil via the Keystone XL Pipeline and the TransMountain Pipeline.

With those pipelines still running into resistance, investors in Canada’s Athabasca tar sands region are scrambling to get their oil to market by any means necessary — including shipping crude oil by truck across the Canadian border, then transloading it to trains in North Dakota to get it to West Coast ports.

And as a new report produced by the Center for Sustainable Economy reveals, they’re getting some help from friends in high places.

They’re financing two proposed Oregon crude oil terminals — one in the Port of Columbia County, owned by Global Partners, and the other in Portland, owned by Zenith Energy Management. Both terminals are situated in a region that is overdue for a major quake. The Zenith terminal in particular is situated in an earthquake subduction zone, putting it at special risk.

Kayne is a primary financier of both the Zenith and Global Partners operations sites. He’s also a major Republican Party campaign donor and closely aligned with the Koch brothers’ financial and political networks.

Significantly, he is also among the inner circle of super-wealthy donors contributing to President Donald Trump’s legal fees, which have run more than $8 million since taking office — the highest of any president.

The other financier, former Treasury Secretary Geithner, is widely credited with playing a major role in the Wall Street bailout following the subprime mortgage crisis of 2008.

Geithner is now director of Warburg Pincus investment company, which created Zenith Energy to facilitate the flow of crude oil by rail to Portland. Warburg Pincus is deeply invested in the Bakken and tar sands region and, together with Global Partners is a leading donor to Democratic candidates at all political levels.

Both terminals and their backers provide proof that tackling climate change means tackling corruption at the highest levels of our democracy, regardless of party affiliation.

As the pipeline protesters have shown, it’s possible to resist these destructive projects even when big money — and powerful people in Washington — are behind them.

And as the 2020 campaign gets underway, there’s a huge opening for candidates — from presidential candidates down to local port commissioners — to take a real stand for the planet, and refuse to take campaign contributions from these industries threatening our future.

Daphne Wysham directs the Sustainable Energy & Economy Network and the Climate Justice Program at the Center for Sustainable Economy. This op-ed was distributed by OtherWords.org