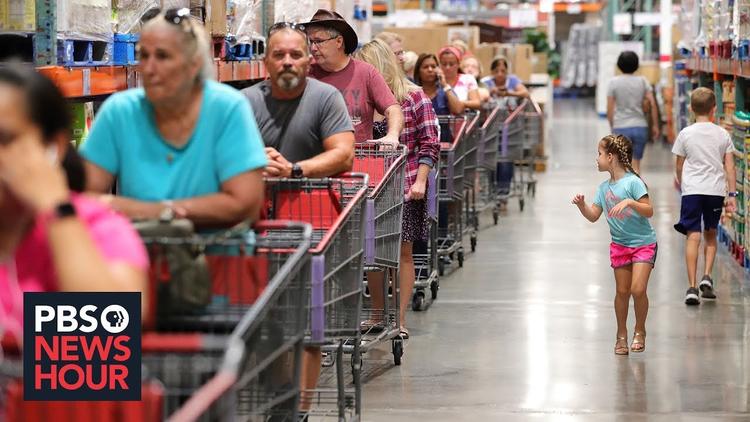 Hurricane Dorian has gathered strength from the freakishly warm waters of the Caribbean to become a category 4. It is already raging with 130 mph winds, but is expected now to become even stronger. It is menacing the Bahamas, from which tourists can afford to flee; but what about the people who live there? It is still unclear whether it will head across Florida or turn north up the coast of the state, sparing it tremendous devastation.

Florida governor Ron DeSantis has a better environmental policy than his Republican predecessors and has actually instructed the state’s Environmental Protection Agency to make decisions on the science about climate crisis impacts.

But, the Sun-Sentinel points out that DeSantis’ green image has a huge gap. He is doing nothing practical about the state’s carbon dioxide emissions, which are what cause sea level rise and warming oceans and monster hurricanes.

The paper points out, “Most electricity in Florida is generated by fossil fuels including 61 percent from natural gas and 23 percent from coal. Natural gas is not clean. It’s also a dangerous fossil fuel that emits about half the carbon into the atmosphere as coal.”

DeSantis has done nothing to promote the electrification of transportation, such as requiring higher fuel efficiency.

The Sun-Sentinal adds, “Florida is ranked 47th nationally in the percentage of electricity generated from renewable energy at only 2 percent, mostly from biofuels, such as sugar cane waste.”

The best that can be said is that private utilities’ plans for expansion of solar power in Florida are not being blocked by DeSantis. He isn’t to my knowledge doing anything pro-active on the issue.

But remember, DeSantis is a big supporter of Trump, who is using the executive power of the presidency vastly to increase use of fossil fuels and carbon emissions nation-wide. If you really cared about the environment you couldn’t ally with Trump.

When DeSantis served in Congress as a representative from Florida, he voted against measures to deal with the climate crisis, and said that past climate crisis predictions had not proven true (actually the predictions are proving to be way too conservative and not alarmist enough).

DeSantis used to say, “The idea that we have the capacity to change or stop the climate, I’m just skeptical.”

If you don’t recognize the cause of a problem, you can’t fix the problem.

Florida emits 227,000,000 metric tons of carbon dioxide (CO2) every year, over 4% of the US national output. It therefore played a role in making Dorian into a raging calamity of a sort seldom seen in the state in recorded history. CO2 is a heat-trapping gas that interferes with the heat of the rays of the sun radiating back out into space after hitting the earth. The more CO2 in the atmosphere, the hotter the oceans and the wetter the air above them, creating conditions for ever more powerful hurricanes.

Gee, human beings are putting 37.1 billion tons of a heat trapping gas into the atmosphere every year by driving our cars, cooling and heating our homes, making cement, and industrializing our agriculture. A passenger car weighs 2 tons, so this is like shooting 20 billion exploding automobiles into the sky with catapults every year. There are only about a billion passenger cars on the road now worldwide. And then somehow surface ice is melting and the seas are rising and the hurricanes are getting more powerful. It is not clear whether DeSantis has become convinced that human beings are causing all this, or if he is simply avoiding offending Florida’s environmentalists by being more cautious in his diction. But he certainly isn’t doing anything to cut back on the state’s use of fossil fuels.

Florida’s emissions alone are bigger than some countries in the global south. And look at Costa Rica, which makes almost no electricity with fossil fuels.

Manmade climate change does not cause hurricanes in general. Hurricanes form naturally over warm water. The warmer the water, the stronger the hurricane. There were hurricanes before 1750, when human beings decided to burn so much wood and coal (and later, oil and natural gas) that they would turn the whole world tropical.

What human beings have done is to magnify hurricanes by causing billions of tons of heat-trapping gases to enter the atmosphere. We have sort of acted on the climate the way radioactivity works on Dr. Bruce Banner (nowadays played by Mark Ruffalo), turning him into a large, green, angry incredible Hulk.

Heat-trapping gases cause the average surface temperature to rise over time. The oceans are a degree F warmer than the 20th century average.

Hotter water has some basic properties. It expands, so the sea level rises for that reason. But surface ice over land also melts and runs into the sea, which also raises the sea level. The Caribbean is a good half foot higher now than a century ago. By the conservative IPCC estimates, seas on Florida’s coasts will be two feet higher in 2050 and six feet higher in 2100, causing billions in coastal property damage. It will likely be worse.

Higher seas lead to higher storm surges. Recent hurricanes in Florida have produced 8-foot storm surges, which for residents with houses along the beach was “not survivable.”

How fast and destructive the winds of a hurricane are depends on how hot the water is, over which it travels. Hotter water produces more severe winds. The Caribbean waters have in recent years been unusually hot.

DeSantis should resign the governorship and just go home. He is anyway a huge racialist bigot, as demonstrated by his awful book and the internet groups to which he has belonged. But even worse, his inaction on fossil fuels will literally sink Florida.

* Some passages in this column were recycled from last year’s on the DeSantis campaign and that year’s hurricanes. If politicians can keep making the same mistakes year after year, I can keep writing the same column.