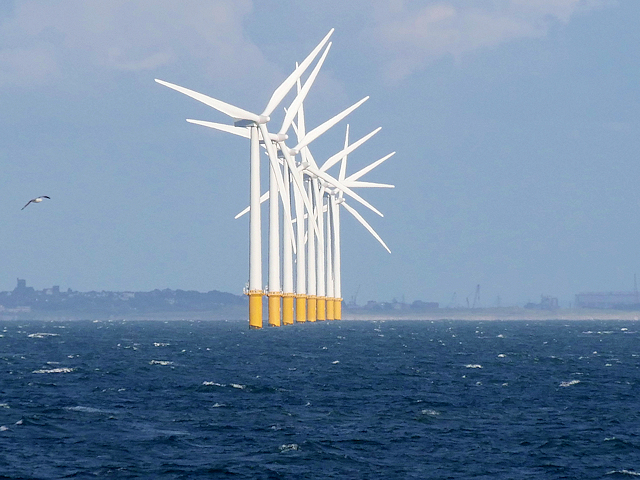 Ann Arbor (Informed Comment) – Donald Trump is both an ignoramus and a loudmouth, and has used his vast fund of cluelessness to talk down wind power. He says that if you depend on wind power, your t.v. won’t work when the wind abruptly stops blowing. This is not true. He says that wind power is bad for people’s health. This is the opposite of true. That is, it is not only false. It is pernicious. Wind power in replacing dirty, polluting fuels such as coal, is tremendously good for people’s health. Burning coal contributes to bronchitis, pneumonia, asthma, heart attacks, lead poisoning and even mercury nerve poisoning. Plus it acidifies fresh water lakes. Plus it causes global heating and climate crisis.

Wind power in contrast is clean and healthy.

Ask Denmark. Ordinarily wind produces over half of that country’s electricity. In June and July wind production was up 25 percent year over year, according to David Weston at Wind Power Monthly. Wind supplied 2/3s of the country’s electricity. Denmark also exports to Germany, but since Germany was having a wind boom of its own this summer, Denmark did not ramp up as much as it could have.

Offshore wind technology in particular is allowing that sector to come on like blockbusters. Mary B. Powers, Peter Reina, and Debra K. Rubin at Engineering News-Record quote industry insider Matt Palmer as saying that the new offshore wind installations are a once-in-a generation new technology that will over the next decade and a half fuel a new industrial revolution. European concerns have credible plans to put in 65 gigawatts of new offshore wind by 2025.

But ENR notes that the big surprise is the rapidity with which offshore wind has become a major sector in the United States, which has abruptly overtaken Asian countries, with 15.7 gigs of offshore wind and big projects now planned off New Jersey and New York.

Wind power is the future. Jason Deign at Cleantech points out that worldwide there are six offshore wind projects the size of small nuclear power plants in the pipeline, mostly in China and Britain. That is, they are near to or more than 600 megawatts.

The costs of wind, both onshore and offshore, are falling rapidly. As Chrissy Sexton points out at Earth.com, the cost of wind power has fallen to a tenth of what it was 40 years ago. The United States now has enough wind installations to power 28 million homes, and we get 6.5% of our electricity from this source, says Ben German at Axios. He says new wind installations can generate electricity at 2 cents per kilowatt hour; coal is usually counted as 5 cents a kilowatt hour and so is more than twice as expensive, and plus its “externalities” or health and climate costs make it actually about 89 cents a kilowatt hour. Kansas, Iowa and Oklahoma all get over a third of their electricity from wind. Kansas and Oklahoma have governments that are beholden to Big Oil and to a rigid Republican ideology that has ruined their education and social services infrastructure, so those states are not doing this out of ideology. Wind is good business.

The technology is changing with incredible rapidity. Some of the new wind towers have a span the size of a football field. Anmar Frangoul at CNBC reports that one new wind farm project just being started in Texas will power 168,000 homes all on its own. These installations can be built in a little over a year, and this one will be finished by late 2020. Texas has over 28 gigawatts of installed wind capacity, the most of any state in the union.