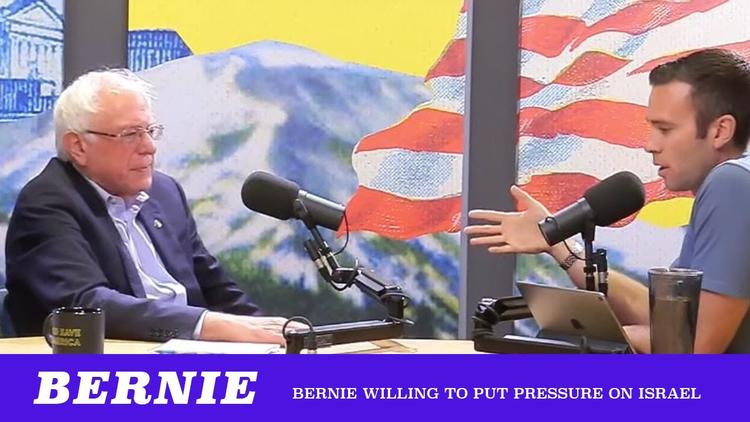 US Democratic candidate and presidential hopeful Bernie Sanders has said that criticising Israeli government policy is not anti-Semitic.

Speaking at a town hall meeting in the state of New Hampshire, on the US’ east coast, Sanders told the crowd that “as somebody who is proudly Jewish”, to be critical of a right-wing government led by Israeli Prime Minister Benjamin Netanyahu “is not to be anti-Semitic”.

Sander’s comment came in response to a question from one audience member who described herself as previously “feeling really let down by politicians who only represent a Jewish voice that is completely uncritical of Israel” and as belonging to “a generation which understands that opposition to the [Israeli] occupation [of Palestinian territories] is a Jewish moral imperative”.

Asking Sanders directly “why does it matter to you to fight to end the occupation,” the Vermont Senator responded:

All that I have ever said about this issue is that US foreign policy should be even-handed. We respect Israel. Israel has every right in the world to live in peace and security, but so do the Palestinian people.

"As someone who is proudly Jewish, to be critical of a right-wing Netanyahu government in Israel is not to be antisemitic." pic.twitter.com/kfXmsLP0yz

Sanders also used the opportunity to double down on his previous promise to use US aid to Israel to pressure the Israeli government to end its now 52-year-old occupation. “The United States gives a whole lot of money to Israel,” Sanders conceded, adding that “I think we can leverage that money to end some of the racism that we have recently seen in Israel”.

In October 2018, the largest-ever US military aid package to Israel – worth $38 billion over a period of ten years – entered into force. The Memorandum of Understanding (MOU) was initially signed between the US and Israel in 2016 and set funding at $3.3 billion in Foreign Military Financing, with a further $500 million for “cooperative programmes for missile defence” every year for the next decade.

Under US President Donald Trump this high level of spending has been fiercely protected, despite budget cuts to other sectors such as environmental protection, USAID, housing and health; the 2020 budget proposal sent by the White House to Congress in March included the full $3.3 billion aid outlined in the 2016 MOU.

Sanders’ comments on anti-Semitism will likely be seen as a timely intervention in a raging debate – both within the US and around the world – as to what constitutes anti-Semitism.

Last week the US State Department revised its definition of anti-Semitism to include “drawing comparisons of contemporary Israeli policy to that of the Nazis”, adding to the number of examples included in the definition which directly relate to Israel.

Many of these examples mirror those in the International Holocaust Remembrance Alliance (IHRA) definition, which has been widely adopted by organisations and political parties.

The IHRA definition has since been deemed unfit for purpose on the grounds that it was “never meant to serve as a catch all definition for anti-Semitism”. One of the definition’s creators, US attorney Kenneth S Stern, has criticised the way in which the IHRA definition is now being used to restrict academic freedom and punish free speech, particularly when it comes to pro-Palestine events and any criticism of Israel.

Israel’s Minister of Strategic Affairs and Public Security, Gilad Erdan, has openly praised the role of the IHRA definition in labelling supporters of the Boycott, Divestment and Sanctions (BDS) movement anti-Semitic, thus limiting the space for anti-occupation activism.

“More and more countries and institutions are adopting the IHRA and State Department definitions of anti-Semitism, which incorporate both classic and new anti-Semitism,” Erdan explained, adding that “the ground-breaking resolution of the Bundestag [German parliament] recognizing the anti-Semitic nature of BDS was the most important step yet”.

The Michael Brooks Show: “Shoutout: Bernie Is The Only Candidate Willing To Put Pressure On Israel (TMBS 100)”