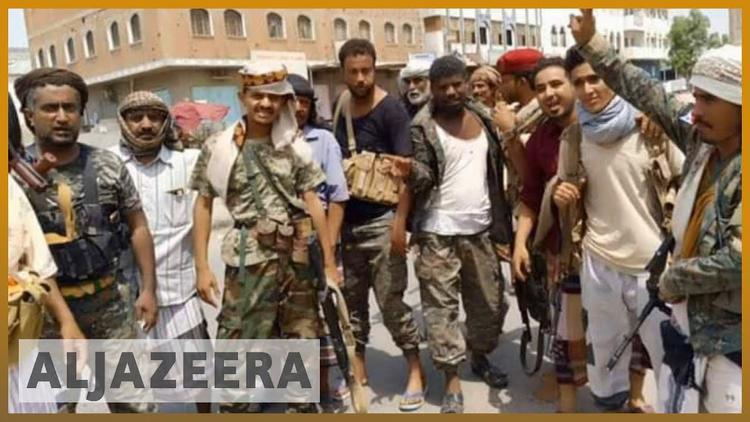 Ann Arbor (Informed Comment) – Yemen’s southern separatist movement announced Thursday that it had regained control of all of the Arabian Sea port city of Aden and its surrounding province, and was near to taking Abyan province and its capital, Zinjibar. This according to the Egyptian Newspaper al-Masry al-Youm (The Egyptian Today) and Agence France Presse. Witnesses on the ground said that armored vehicles of the Islah movement (the Yemeni Muslim Brotherhood) were fleeing Zinjibar and other Abyan cities. Islah is allied with the UN-recognized nationalist Yemeni government of Abd Rabbo Mansour Hadi. Some social media reports from Yemen alleged that the southern separatists had retaken Zinjibar.

The Trump administration backs the Saudi-UAE war in Yemen on the grounds that it is against the Houthi rebels in the north. But Trump has been silent as his putative allies have gone for each others’ throats.

Embed from Getty Images
A fighter of the UAE-trained Security Belt Force, dominated by members of the Southern Transitional Council (STC) which seeks independence for south Yemen, flashes the victory gesture while standing in the back of a technical (pickup truck loaded with an anti-aircraft gun) near the Aden Hotel in the Khor Maksar district of the second city of Aden on August 29, 2019. (Photo by Nabil HASAN / AFP) (Photo credit should read NABIL HASAN/AFP/Getty Images).

The civil war being fought between the two Sunni forces, each backed by a major Gulf oil monarchy, is plunging desperate Yemen — one of the poorest countries in the world — into even more dire straits. The fighting has created thousands of new refugees at a time when ten million were already food insecure (one mishap away from starvation). This proxy war could be that mishap.

Hadi’s and Islah’s forces had been bombed intensively by United Arab Emirates fighter-jets, forcing the withdrawal. The UAE backs the Southern Transitional Council (STC), whereas Saudi Arabia backs Mansour Hadi (despite his alliance with Islah, which the Saudis generally distrust since they abhor the Muslim Brotherhood). The Yemen proxies of the two powers have increasingly turned on one another instead of continuing the fight to take northern Yemen, which is held by the Zaydi Shiite Helpers of God or Houthi movement. Islah’s and Mansour Hadi’s forces had advanced with Saudi backing on Aden and Zinjibar on Wednesday but were expelled by the UAE airstrikes.

President Mansour Hadi (who is president of less and less of Yemen) said he had ordered his forces outside of Aden so as to avoid the destruction of the city. He is based in neighboring Saudi Arabia.

A statement from his office said, in Al Jazeera’s translation: “”They have committed themselves to injustice, aggression and using armed forces against the Yemeni people in the southern governorates, using the UAE’s military arsenal in order to divide our country.”

Then Mansour Hadi asked his Saudi patrons “to intervene to stop this blatant intrusion by these militias and their aerial bombardment of our armed forces”.

The United Arab Emirates maintains that it intervened to save the STC from “terrorists.” Abu Dhabi considers the Muslim Brotherhood, a fundamentalist social and political movement, to be terrorists, though Islah functioned in the 1990s and 2000s as a civil political party. The UAE leadership is Muslim but is profoundly afraid of political Islam as a potentially revolutionary movement of the sort seen in Iran in 1979 and Egypt in 2011-2013. I guess they want a separation of religion and state, but it is the 1790s French sort where some kinds of religion is persecuted by the state, not the American sort where religion is protected from the state.