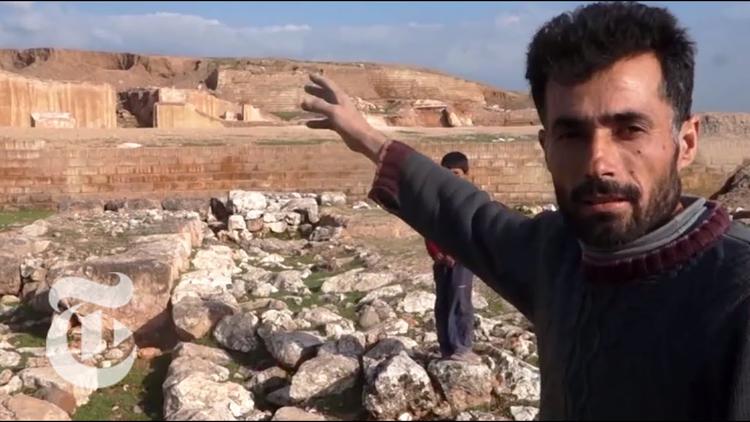 I used to be a Near Eastern archaeologist working in Syria. Nowadays, I am stuck in academic purgatory, observing from a great distance as the country burns, unable to help protect its history or its present.

Syria sits within what’s known as the cradle of civilization. It’s part of the area archaeologists call the Fertile Crescent that stretches from modern-day Iraq to Egypt. This is where researchers believe human beings first settled down from nomadic lifestyles, where agriculture was born, where people originally domesticated animals thousands of years ago.

There were over a hundred archaeological digs ongoing in Syria before 2011, with researchers from inside and outside the country participating. What we all uncovered helps us learn more about the human species and our ancestors.

But when war broke out in 2011, archaeological excavations were suspended, and all international teams left the country. Images and videos of the destruction of cultural heritage sites started to circulate on news and social media sites. The Syrian war has not just interrupted the research that would help fill out the picture of early human culture; combatants are actively wrecking earlier finds.

Thousands of years of cultural heritage

Before the uprising in Syria, I worked as a zooarchaeologist, analyzing ancient animal bones from sites that date back to the Bronze Age. I am one of a handful of experts in this field who is originally from the Middle East.

In my research, I focused on what animal bone fragments could tell us about the people living in these ancient urban centers and how they used animals.

Based on my analysis, my colleagues and I concluded that ancient communities were investing in large herds of sheep and goats during the Bronze Age, between 3,000 and 1,200 B.C. People used herd animals and others – including cattle, pigs and wild species – for food, for raw materials for tools and even as a means to communicate with the spiritual realm through sacrifice and artwork.

For the most part, animal bones alone can’t reflect the richness and the level of craftsmanship in these kingdoms. A great example comes from the royal palace of Qatna, where an intricate stone sculpture of a monkey holding a vessel that held facial paint was recovered from a massive burial chamber; it dates to 1600-1400 B.C.

Archaeologists have been able to document major changes that happened further back, in the Neolithic period, which began roughly 10,000 years ago. They’ve uncovered innovative prehistoric architecture such as the communal buildings of Jerf el Ahmar. They’ve documented cultural developments in daily life, such as the emergence and the distribution of pottery cultures and food processing and cooking techniques. They’ve uncovered complex funerary practices in Syria, including plastered skulls from Tell Aswad that date back to 9,500 years ago, which are considered one of the best-preserved examples of decorated human skulls.

Excavations have found many much older artifacts and fossils in this region too. In Dederiyeh cave in the northwest of Syria, one group recovered almost-complete skeletons of two Neanderthal infants, who lived sometime between 48,000 and 54,000 years ago. Recent research was able to connect their skeletal features with the shape of modern human bones. It’s a crucial step to reconstruct the evolutionary relationship of our species with other hominids.

Archaeologists made other remarkable findings at the El Kowm oasis in central Syria, close to Palmyra. Here they uncovered hominid fossils alongside giant camel bones that date from around 100,000 years ago, before the time of Neanderthals in this region.

It’s evident the Fertile Crescent played a vital role as a path and a home for humans and their ancestors for a very long time. It continues to host waves of communities that invented and mastered skills and techniques which were essential for the survival of our species.

After the spring of 2011, archaeologists stopped working in Syria. Scientists aren’t uncovering new sites or digging deeper into the long human history of this region.

Artifacts and sites are being destroyed. Outrageous looting and smuggling of artifacts are still taking place in different parts of the country. The looting of antiquities became an economic tool for the Islamic State group to maintain its supremacy in the northern part of the country. Many of the fighting factions in Syria took advantage of the rich cultural properties and smuggled what they could to Western markets and collectors.

Consequently, museums shut down and were barricaded. Still many of them were targeted during the armed conflict, and they severely suffered.

Some sites – such as Crac des Chevaliers castle and Aleppo’s ancient monuments – were caught under fire between the regime forces and the opposition. As the international community recognized the destruction of world heritage and the value of Syrian archaeology in terms of global history, fighting groups realized they could use these sites as political pawns. While the Russian Orchestra performed at the ancient amphitheater after “liberating” Palmyra from the Islamic State group in 2016, IS retaliated when they recaptured the city in 2017 by destroying the facade of the monument.

And this chaos has been in place for the last eight years.

Conducting archaeological research requires direct contact with ancient sites and materials. But the escalating armed violence in Syria continues to prevent archaeologists from resuming their work on the land. Most of the international institutions shifted their focus from Syria and moved their teams and projects to neighboring countries.

Meanwhile, the relatively smaller number of Syrian archaeologists face multiple challenges. On a most basic level, war is ripping through their homes. But they also face an occupational challenge: How can you pursue a career in the field in the midst of armed conflict supported by multiple geopolitical powers?

Most of this group of ambitious young archaeologists – including me – were forced to flee the country. Though currently safe from the physical danger, we still face a harsh professional reality. Competing in a fierce job market, we can only promise that someday we’ll be able to travel and resume our work back where we used to belong.

Many Syrians in exile are still participating in initiatives such as Syrians for Heritage, trying to protect and restore artifacts and museums throughout the country and attempting to keep Syrian cultural heritage alive in our diaspora. I believe this mission could be successful – but only with genuine support for the Syrian people and not just their ruins.