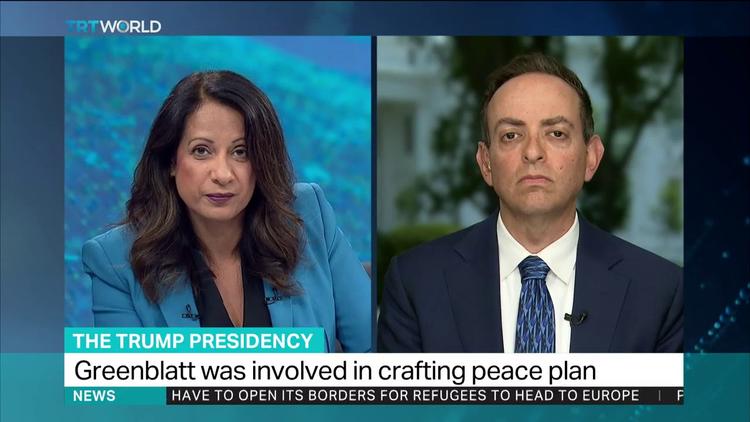 Ann Arbor (Informed Comment) – Jason Greenblatt, the Trump organization lawyer (what does that tell you about him?) who was appointed to spearhead the Trump administration “deal” between Palestinians and Israelis, has stepped down after nearly three years of screwing over the Palestinians and Arabs, taking food out of Palestinian mouths, and annexing vast swathes of territory for Israel. His “deal” is a nonstarter for Palestinians and has never been seen. Even Greenblatt seems to be deserting this sinking ship of his own manufacture.

Greenblatt has been an instrument of Zionist colonization dressed up as a “peace negotiator,” a sham that is par for the course in American Middle East policy with only a few exceptions. During his time as supposed peacemaker, Israel has built thousands of housing units on stolen Palestinian land, and now Israeli Prime Minister Binyamin Netanyahu plans to simply annex the land on which they stand entirely. Greenblatt spearheaded moving the US embassy to disputed Jerusalem, to underline a sole Israeli claim on the city that has a substantial Palestinian population and which was never awarded to Israel by the UN General Assembly or any other institution of international law. He spearheaded the Israeli annexation of Syrian territory in the Golan Heights, which is illegal in international law. The UN Charter forbids acquiring neighbors’ land by military conquest because the organization’s founders had disapproved of what Hitler did to Poland.

Israeli leaders take some pride in being a member state of the United Nations, which they see as bolstering their state’s legitimacy — a legitimacy questioned in much of the world, inasmuch as it was created as a colonial project by the British Empire that ended in the theft of Palestine from the Palestinians to pay for European Christian sins against European Jews. (And to create a kind of stationary battleship in the Middle East for postcolonial Western dominance of the region).

But the Israeli leadership has assiduously undermined everything the post- WW II United Nations stands for, above all the end of taking territory from neighbors through war. The Israelis act more like fascist Italy, which occupied part of France and then annexed it during WW II. None of the Allies acted like that with other Europeans. The Israelis also thumb their nose at the 1949 Geneva Convention on the treatment of Occupied populations. In fact, there is hardly any international body of law with which Israel is in compliance. It acts like an outlaw state.

In 1948, some 500,000 Jewish colonists chased 720,000 out of 1.3 million Palestiians out of their homes, then came after most of them in the West Bank and Gaza in 1967 and have militarily occupied them ever since. The 5 million Palestinians under the control of 6 million Israeli Jews are deprived of basic human rights and are having their property gradually chipped away at by the Israeli squatters stealing ever more of their land.

The 1.3 million Palestinians of 1947 have grown into 12 million today, Nearly 2 million in Israel, 5 million in the Occupied Territories, and 5 million scattered in Jordan, Egypt, Syria, the Gulf, Argentina and the United States.

When you lose everything — land, home, bank accounts, supportive relatives and fellow villagers — you are penniless. Being penniless in a foreign country (Lebanon, Syria, Jordan, the Israeli-controlled West Bank and Gaza) is not easy to come back from, since locals don’t want you taking their jobs or even, in Lebanon’s case, being able to buy real estate. Hundreds of thousands of Palestinians in Gaza, the West Bank, Jordan, and Lebanon are still living in refugee camps.

How would the kids get an education (they’re a burden on some unwelcoming host country)? Most Palestinian refugees are treated by their “hosts” exactly the way the Trump administration treats refugees in the Southwest. The Israelis have never paid a dime in compensation for stealing those people’s lives, even though they’ve trumpeted the need for every last penny of reparations to be paid by Germany for harms done Jews. (The harms done Jews were immeasurably greater, but harm is harm and the principle of paying for a tort should be universal).

So the United Nations Relief and Works Agency, to which the United States used to contribute stepped in to educate the refugee kids. Without much property or capital, Palestinians are still disproportionately poor. There is an analogy between what slavery did to African-Americans (which stripped them of land, money, and cultural capital) and what Israeli displacement did to Palestinians. Both massive deprivations left millions impoverished for many decades. But at least UNRWA educated the Palestinians, and their literacy skills got some of them into professions or (foreign) bureaucracies, and contributed to Palestinians’ notional GDP as a people.

But right wing Jewish nationalist supremacists saw something else going on. They believed that UNRWA by educating the Palestinians, allowed them to retain a Palestinian identity. Many Zionists believe in undifferentiated “Arabs,” and cruelly deny there are any Palestinians. They think that the Palestinians should just meld into the undifferentiated “Arab” population and develop permanent amnesia about Palestine. The theory that Palestinians wouldn’t know who they are without UNRWA is of course incorrect. The Palestinian mothers tell them what village their great grandparents and grandparents were from, and what that village is now called by the Israelis who moved into it and stole all the houses and farmland. In Lebanese refugee camps, Palestinians even arrange the camps by “village” in memory of the old country.

Jason Greenblatt, to his everlasting shame, bought into this narrative about UNRWA and had Trump virtually defund the agency and cut off USAID support to the Palestinians, altogether worth $5 billion.

Greenblatt as an elite New York attorney has no problem educating his six children, or providing them with food and healthcare, while poor Palestinians are living on the edge. And he pushed their noses into the dust, taking crucial opportunities away from them. He is as heartless as he is hairless.

Here is the irony. Greenblatt’s parents were Hungarian refugees from fascism. That experience did not give him empathy with other refugees. He joined the persecuting class. He should think about whether he’d have liked his family to be treated the way he has treated Palestinian refugees.

But someone who has worked for Trump as his real estate lawyer since 1997 probably is not big on introspection. Or conscience.