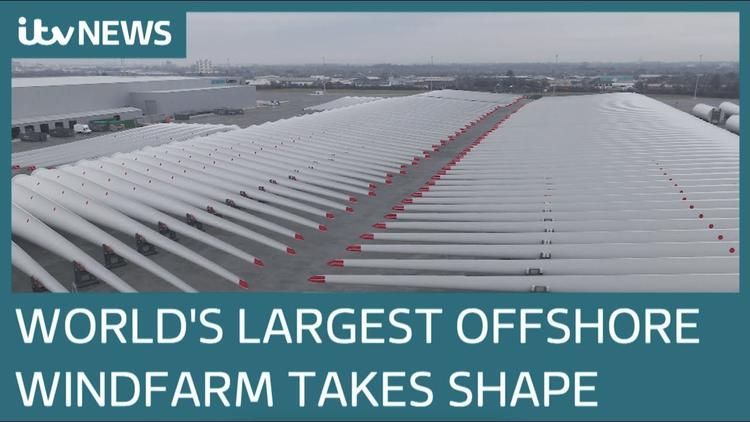 Ann Arbor (Informed Comment) – Hanna Ziady at CNN Business reports that just next year, in 2020, the world’s largest offshore wind farm will open 75 miles off the eastern, Yorkshire coast of Britain. Hornsea I alone will power 1 million homes. Britain, with a population of 66 million, has 27 million households. It has 174 enormous wind turbines.

Renewables– mostly onshore wind– already supply 33% of the UK’s electricity. Along with nuclear, low-carbon electricity makes up 52% of Britain’s total. Only 5% of Britain’s power now comes from coal, and sometimes weeks go by when none does. Coal was a staple in British power from the nineteenth century, so this development is a dramatic change.

There is now a goal to get 33% of British electricity from offshore wind alone by 2030, making this source the backbone of British energy.

In Denmark, the offshore Horns Rev 3 plant, which was just inaugurated will produce 12% of all Danish electricity just by itself.

Denmark wants to produce 50% of its electricity from wind by just next year, 2020, and Horns Rev 3 is a big part of making that happen.

Spain gets about 40% of its electricity from renewables. A 200 megawatt offshore wind farm is planned for off the Canary Islands, and many other wind projects are being implemented in Spain so as to take advantage of government subsidies while they still exist. They are being fazed out, but the fact is that wind power has fallen in price so much that it can compete without subsidies.

The United States is backward on renewables, getting only about 19% of its electricity from non-carbon, non-nuclear sources (and that includes hydro). Wind makes up a little less than 7%, which is a crying shame given the country’s enormous potential. However, there are several big offshore wind projects now on the books, and things will change rapidly over the next decade, despite the pro-carbon policies of the Trump regime. Wind has fallen from 7 cents a kilowatt hour in 2009 to only 2 cents a kilowatt hour last year, and prices go on falling as turbines get bigger and more efficient. You can build and run wind and solar plants more cheaply than you can just operate a lot of current coal plants, and 40% of the latter are running at a loss. Since coal is killing the planet, that is c-a-raaazy.