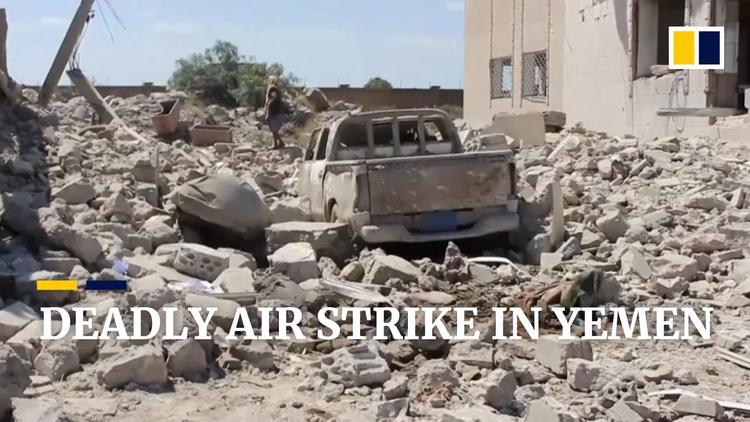 Ann Arbor (Informed Comment) – Saudi fighter-jets bombed a makeshift prison on a college campus in Dhamar, Yemen, south of the capital of Sana’a eight times on Sunday, killing at least 100 prisoners according to the International Committee of the Red Cross.Dozens of wounded have been taken to Revolution Hospital and many are in critical condition.

US Senator and Democratic presidential candidate Bernie Sanders said on Social media “U.S. bombs, logistical support, and intelligence for the Saudi dictatorship’s airstrikes make us complicit in this nightmare.” (As Commondreams notes.)

Congress has declared this war unconstitutional. We must now stand up to Trump and defund all U.S. involvement in these horrors.

Britannica describes Dhamar as an old Zaydi Shiite theological center nestling in a valley 12 miles long between two volcanic peaks, 8000 feet above sea level. The ad hoc prison had about 180 inmates. The Houthis are alleged to torture people there, and likely some of its present population are political enemies of the Houthis who are kept there. So the Saudis massacred their own supporters.

Why would they do that? Maybe some of the recently-captured POWs had tactical information that the Saudis didn’t want them spilling to the Houthis. I have difficulty believing that their on-ground intelligence is so abysmal that they really thought the small college building was a military base, which is Riyadh’s cover story.

Human Rights Watch has complained about the high incidence of Saudi bombings of non-combatant sites such as schools and hospitals. One human rights organization maintained that a third of all Saudi-led air strikes hit civilian targets. The reason for this humanitarian crisis is not only Saudi callousness but also their strategy in fighting this war. North Yemen is extremely rugged. I’ve gotten carsick just traveling outside Sana’a. So the Saudis have declined to put an invasion force into the field, and it isn’t anyway clear that their inexperienced and perhaps not very committed infantry is up to it.

So the Saudis have just been bombing the Houthi-held areas at 30,000 feet. They’ve destroyed some of historic downtown Sana’a and killed a lot of innocent civilians. But the Houthi rebels are a guerrilla force that seized northwest Yemen beginning in 2014, and you can’t usually fight a guerrilla war successfully from the air. The US intensively carpet-bombed the Viet Cong for years and still lost.

Something like 80,000 people have likely been killed in Yemen since 2014, and of the country’s 28 million people, some 10 million are food insecure, which is one piece of bad luck away from starving to death.

Sen. Sanders is right that Americans are deeply complicit in this nightmare.