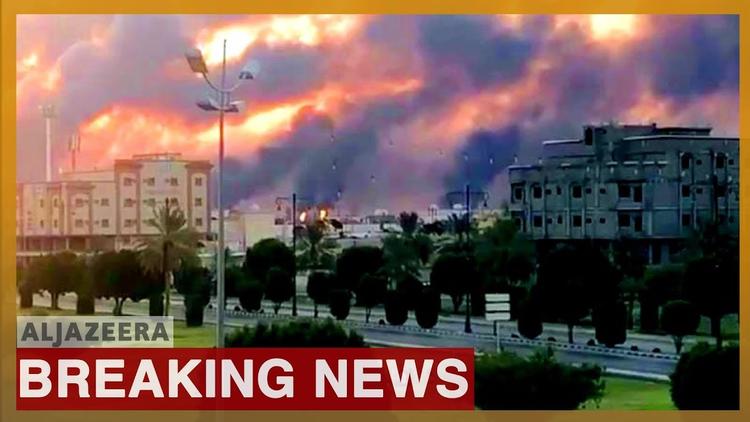 Yemen’s Zaydi Shiite Houthi rebels, who control the northwest of Yemen, including the capital of Sana’a, claimed on Saturday to have launched the 10 drones that struck the major Saudi petroleum production and refining installations at Abqaiq and Khurais.

Secretary of State Mike Pompeo denied that the drones came from Yemen, blaming the attack on Iran instead. Iran provides some minor aid to the Houthis, but the latter lack control of a port or secure overland routes out of the country and so Iran couldn’t possibly have given that much help. The Houthis are an indigenous Yemeni movement with Yemeni discontents with Saudi Arabia.

Pompeo’s impetuous tweet, like the ones coming from his president, was itself not accompanied by any evidence and configured a local conflict as major geopolitical one. Pompeo has long looked for a pretext to overthrow the Iranian government and to make war on Iran.

What Pompeo won’t tell you is that current Saudi crown prince Mohammed Bin Salman had launched a brutal air war on Yemen in 2015 in hopes of dislodging the Houthis, not because of any alleged Iranian connection but because Saudi Arabia had been used to having major influence on Yemen through dictator Ali Abdullah Saleh and had lost control when Saleh was overthrown by the 2011-2012 youth revolution.

The Saudis, the United Arab Emirates and other allies have for nearly four and a half years intensively bombed Sana’a and other civilian towns and cities in north Yemen. About a third of the airstrikes have hit civilian structures, including apartment buildings, schools, hospitals, ports and bridges. Some 10 million Yemenis out of 28 million are food insecure as a result of the war, with cholera and other debilitating diseases rampant, and some estimates for the death toll from direct military action on all sides run to 80,000.

The Saudis apparently thought themselves immune from any significant counter-attack. The Houthis do not have an air force and are primarily a ground-based guerrilla movement. But somehow (probably via Iran, though they did also capture a lot of American components from government weapons storehouses) they have acquired drones, and have inducted Saudi Arabia into the age of micro-wars. Drones don’t set off anti-aircraft systems because they are too small to detect.

The US Congress had called on the US to stop supporting the Saudi war on Yemen, but Pompeo insisted on it continuing and Trump vetoed the resolution.

Pompeo himself therefore bears some of the blame for the Abqaiq attack, which is a Houthi counter-attack, replying to years of intensive Saudi bombing of Yemen (one of poorest and weakest countries in the world).

The Saudis learned yesterday what the Israelis learned during their invasion of Lebanon in 2006. Having a huge conventional military superiority over the enemy is not the end-all and be-all of a conflict with a guerrilla movement. Hizbullah in Lebanon was able to use small katyusha rockets and some longer-range, bigger rockets to force 1/4 of Israelis from their homes, and to threaten chemical storehouses in Haifa. The Israelis, discovering that they weren’t invulnerable, were furious at their government for launching such a conflict. A retired Israeli general told me after that conflict that he wished that Hizbullah had had big missiles, since the Israeli air force could find and destroy those. It was the little rockets, often fired from mobile platforms that could then decamp, or from undiscoverable mountain caves, that they had not been able to deal with effectively.

It should have been apparent to the Saudis that an oil state launches a war on a neighbor at its great peril, since oil installations are particularly vulnerable to attack. When the retreating Iraqi Baath Army set fire to Kuwait oil rigs in 1991 as they were forced from that country by George H. W. Bush, they set off a conflagration that took years to put out and cost the Kuwaitis hundreds of billions of dollars.

Until yesterday, the world was producing a little over 100 million barrels of petroleum every day.

Today, it is producing a little over 95 million b/d. That is because 5.7 million barrels a day was taken off the market in a drone attack on the major Abqaiq oil facilities in Saudi Arabia.

In recent months Saudis had been producing 9.8 million barrels a day, about 10% of world supply.

In 2018, Saudi petroleum revenues were about $163 billion. But it just today lost nearly 60% of its production, according to Saudi government estimates.

All other things being equal (they aren’t), and if the outage lasted for a year, that would notionally reduce the Saudi oil income over the next year to only $65 bn or so.

The outage probably won’t last a year, but even if it goes on for a few weeks or a few months, I can’t tell you what a huge hit that is to the Saudi economy. The government receives those revenues, and uses them to build airports and roads and buildings, and to run universities and schools and provide health services. All of those construction plans, including whole new cities, are already in train and all of a sudden a lot of them are going to go unfunded. Saudi youth unemployment is already very high, but imagine the jobs that will be endangered by this catastrophe.

Although, because of shale fracturing (an extremely environmentally destructive process that leaves behind toxic water and earthquakes and releases massive amounts of dangerous earth-heating methane gase), the US now produces 12 million barrels a day of petroleum.

But that isn’t the important statistic. The US uses 20.5 million barrels a day of crude oil products. So it theoretically uses everything it produces and then over 8 million barrels a day on top of that. (The US does export some petroleum because it is cheaper to get say Alaska oil to Japan than to the US East Coast, but it imports more oil to make up for what it sends abroad).

The US is therefore irrelevant to world petroleum export markets because it is a net consumer and it has no chance of replacing lost Saudi exports– even if it ramped up production over the next year, the US would likely only increase to 13 mn. b/d, and promptly use it all and then some.

The country with the best chance of taking up the Saudi slack is Iran, which has been forced by Trump’s economic blockade to keep most of the 2.5 mn b/d it had been exporting in the ground this year, though it is alleged that China is now taking 1 mn. b/d or more. Iran’s chances of smuggling out some of its now-blocked capacity have risen significantly.

In the meantime, gasoline prices will go up as the US enters the 2020 election season, which is the last thing Trump will want to hear.